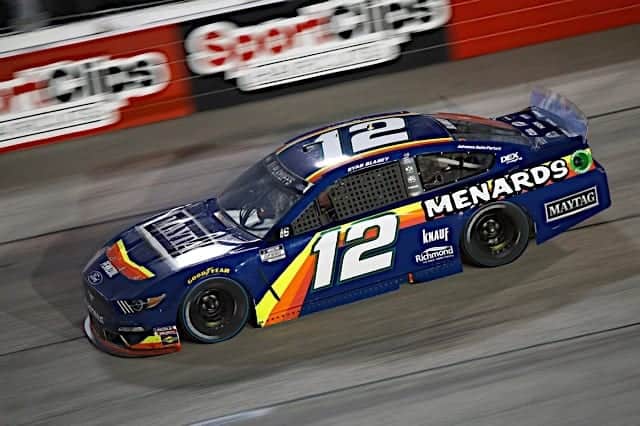 Ryan Blaney Is in a Hole

It’s fair to say that Ryan Blaney began the playoffs at Darlington Raceway in the worst of all possible manners. Improperly mounted ballast saw Blaney lose both his crew chief for the race and 10 of his 13 hard-earned playoff points, not to mention having to start at the rear of the field. Blaney mounted a spirited rally, finishing stage one in 14th position, but an ill-timed flat coming to the green in stage two saw him fall two laps down. The driver of the No. 12 Team Penske Ford ultimately finished 24th and now sits dead last in the playoff standings, 17 points in arrears.

“Definitely wasn’t our night …” Blaney said in a written statement on Penske’s site. ”We had the inspection penalty and lost points before the race started and had some bad breaks. We’ll get ready for Richmond and Bristol and try to gain ground back in the playoffs.”

Compounding matters, Richmond is hardly a favored track for Blaney. In fact, his average finish of 25.5 is his worst at any circuit by some five full positions — a significant delta. Given he’ll start 15th on Saturday behind 14 other playoff drivers, stage points, especially in the first stage, will be tough for him to come by. Blaney assiduously collected said stage points in the regular season, finishing up with 271 total points, 33 more than the next closest competitor (Joey Logano). Worth noting too, only five drivers ended up with 200-plus points, although Denny Hamlin was pretty close in sixth place (198 points).

Assuming Blaney exits Richmond somewhere around or below the cut line, Bristol Motor Speedway will, by necessity, become a pivotal track for his postseason aspirations. Ironically, Blaney’s second-worst track by average finish is Bristol (20.7), but there is a significant upside, as it’s a track where he tends to run if not finish well, leading a career high 439 laps at the circuit, including 60-plus in four of his last five starts at Thunder Valley. But this is the Bristol Night Race. Closing out a playoff round, snuffing the title dreams of four drivers, anything can happen.

Despite the gloomy prognosis, there is good news for Blaney.

He has the veteran championship-winning savvy of crew chief Todd Gordon back atop the pit box and he has consistently shown speed all season; Blaney has led laps in 18 of the 27 races in 2020. Could and should he have won more races than his lone victory at Talladega? Most definitely, but as the series consistently shows us, winning a race is really hard, even for those (cough, Kevin Harvick, cough) who sometimes make it look easy.

Even with the deficit, there are plenty of drivers within touching distance in the standings. Kurt Busch in 11th is only 21 points better off, and there are only so many stage points available. Plus, the two upcoming tracks are venues where disaster can strike real quick. Yes, Blaney will need to put together two really good weeks, but he will almost certainly benefit from the misfortunes of others. I don’t expect Blaney to shift the needle too much this weekend at Richmond given his form there, but when the checkered flag flies at Bristol, my guess is that he is on the right side of the cutoff line, and who knows, maybe even celebrating it in Victory Lane.

How Important is the First Race of the Playoffs?

It’s hard to believe that this is the 17th season of the NASCAR playoffs, albeit run under several different iterations. In the last 16 years, we’ve seen the winner of the first race go on to take the title on four occasions, or 25% if you prefer. Kurt Busch got us started in the inaugural season of 2004, but it was not until 2011 and the irrepressible Tony Stewart that it happened again. Brad Keselowski repeated Smoke’s efforts the following year in 2012, and from there it was a five-year gap to 2017, when Martin Truex Jr. became the last driver to date to win the postseason opener and also the title. Just for the record, when Harvick won his only title thus far, he finished fifth in the 2014 playoff opener, leading 77 laps in the mid-to-late going with the race winning honors ultimately going to Keselowski. Harvick was always going to be on cruise control in Round One this year, given his playoff-point padding, and this win, his eighth of a remarkable season, just adds to an already sizable lead in playoff points. Plenty can happen in the next eight weeks before we arrive at the Championship decider, but as of right now, the Closer is sitting pretty — very pretty indeed.

In a post-race interview with Bob Pockrass, Harvick noted that the playoff tracks line up nicely for Hendrick Motorsports driver Chase Elliott.

Kevin Harvick, when analyzing Chase Elliott’s championship prospects, says the playoffs have a handful of races that line up well for the Hendrick driver to make the Championship 4: pic.twitter.com/k6l2uYMxbD

Given how well Elliott ran (if not actually finished) in the playoff opener and the way the schedule lines up, it’s hard to disagree with this opinion, even if he hasn’t looked like a dialed-in championship contender this season. For much of the year, we’ve talked about Hamlin and Harvick, but the nature of the playoff system is such that with the right victories, you can plot a path and grab a shot at winning it all in the final race. Elliott, for example, could very easily win at the Roval — a race at which he’ll likely be an overwhelming favorite — to make it to the final round, and then again at Martinsville to give him a shot to win it all. The oddsmakers have Elliott as high as +1100 for the title, which looks to be a really good price given the permutations. Yes, there is a long way to go and victories are earned, not given, but you would be a fool to overlook Elliott’s chances at making a very deep run in this year’s playoffs.

Next up, for the first and only time in 2020, we head to Virginia and the D-shaped 3/4-mile oval of Richmond Raceway, race number two of stage one of the 2020 postseason. The spring race, originally set for April 19th, was lost as a result of the pandemic, so it’s good to head to a short track that has often produced fireworks. Kyle Busch leads the series with six wins, while Jimmie Johnson (surprise, surprise), Harvick and Hamlin each have three victories. Matt Kenseth, Keselowski, Clint Bowyer, Kurt Busch and Logano all have a pair of checkered flags. The race distance this Saturday night is just 300 miles and 400 laps, so expect the hard-charging to start right from the drop of the green flag, with every point and position crucial, especially those vital stage-point opportunities. For so long, this race was the precursor to the playoffs, but this will be year three under the bright lights of the playoff for this storied old NASCAR circuit. I’m looking forward to it already.

And finally this week, huge congratulations to Pierre Gasly on his magnificent and much deserved maiden Formula 1 victory. Gasly, who drives for AlphaTauri, became just the 109th driver to win a race and the first Frenchman since Olivier Panis at Monaco in 1996, just a handful of months after Gasly was born. And what a win it was — extremely popular in the F1 driver paddock — for a man who has had more than his fair share of hard times in the past 18 months. So, it’s hard to overstate just how big and welcome a surprise win this actually was, a thought neatly summed up by fourth-place finisher Lando Norris:

In the seven years of the turbo hybrid era of F1, we’ve seen a lot of processional races where typically Lewis Hamilton is fastest in practice, puts his Mercedes on pole with a ridiculous lap, and then leads from flag-to-flag. Now clearly, Hamilton has the advantage in terms of power, but you still have to go out and win it. They don’t just hand you the trophy after all. And for the first half of the race, Sunday looked like being another one of those textbook Hamilton wins until everything changed with the red flag brought on by Charles LeClerc’s vicious shunt. Some quick-thinking strategy saw Gasly grab a hold of the lead, navigate an extremely rare standing restart and lead 26 nerveless laps, the first time he had paced the F1 field in his 55 career starts, to snatch the unlikeliest of victories holding off a hard-charging Carlos Sainz. Chapeau indeed, Pierre!

SUNDAY’S F1 RACE WAS VERY ENJOYABLE. PIERRE GASLY DROVE THE WHEELS OFF HIS ALPHA TAURI. THEY COULD RAISE THE EXCITEMENT LEVEL BY GIVING HAMILTON A 10 SECOND PENALTY HALFWAY THROUGH EVERY RACE AND WATCH HIM COME THOUGH THE FIELD !!