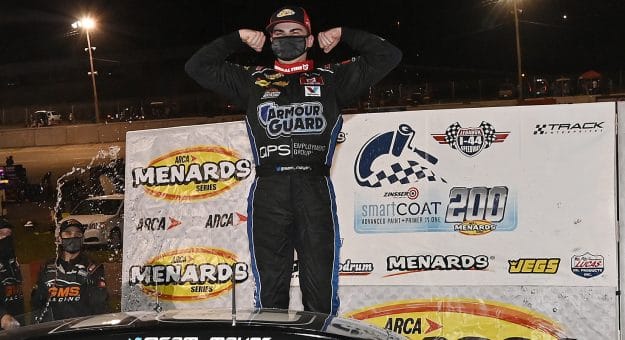 The ARCA Menards Series ventured to Lebanon, Missouri Saturday night (September 5) for the Zinsser SmartCoat 200 at Lebanon I-44 Speedway. The action was wild leaving many drivers on the misery side of Missouri, but Sam Mayer came out victorious.

Mayer tallied his third win in five races on Saturday, and has had the consistency to capitalize on Chandler Smith‘s struggles to take the SCS points lead. Smith had the same struggles that Bret Holmes and a few others in the field had – Hailie Deegan. Deegan was racing hard in the Zinsser SmartCoat 200 and seemed like she could earn her first career victory. The issue was that Deegan wasn’t making any friends on her way to the front. She knocked Smith into the wall early, then made contact with Holmes towards the end for the lead. Ty Gibbs spun her around with two laps to go, and she was relegated to a fifth-place finish.

The rough night for Smith dropped him all the way from the points lead down to third place, five points behind. Gibbs moved from third to second in SCS. The movement in the top three was the only movement in the SCS points standings this weekend.

Michael Self and Holmes round out the top five in the SCS points standings.

ARCA Menards Series East Standouts: Mayer, who continues to lead the way in the East, earned his sixth combined victory of 2020. Gibbs brought it home on Saturday night in the fifth position and moved to second in the Sioux Chief Showdown standings.

Mayer and Gibbs were the only two representatives from the East Series in the Zinsser SmartCoat 200. The East Series returns to action on September 12 at the Toledo Speedway alongside the ARCA Menards Series.

ARCA Menards Series West Standouts: There were zero representatives from the West Series in Saturday’s event.

The West Series is slated to return to action on October 10 at All American Speedway.

What’s Next?: The Sioux Chief Showdown Rundown heads to “Thunder Valley” Tennessee for the Bush’s Beans 200. The event will be the first-ever ARCA Menards Series event at Bristol Motor Speedway after the track had hosted the ARCA Menards East Series from 2012 through the present. Mayer just happens to be the most recent winner at Bristol, earning his first and third career NASCAR victories by sweeping the season’s East Series races in 2019.

With just two events remaining on the Sioux Chief Showdown standings, every point will be extra important before the checkered flag is waved at in the Showdown championship event at Memphis International Speedway.