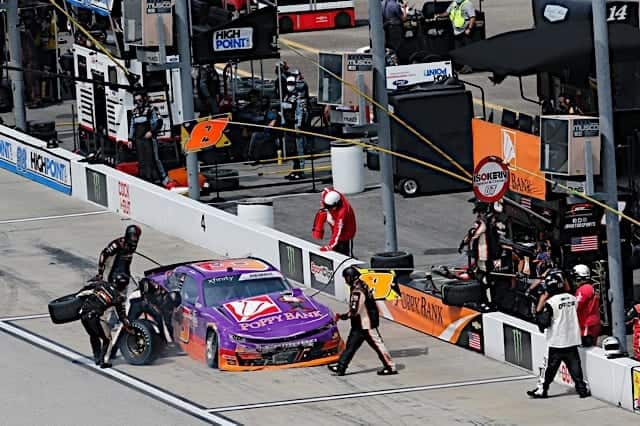 NASCAR’s annual Throwback Weekend at Darlington Raceway brings out all the old and unique paint schemes and this year was no different. For the first time in playoff history, though, the Cup Series playoff opener was held at The Track Too Tough to Tame.

All three national touring races had their moments this weekend, headlined by an epic finish in the NASCAR Xfinity Series. The sport’s Gander RV & Outdoors Truck Series event was mediocre while the Cup race was meh (don’t get me started on the aerodynamic package).

However, all three races had the same running theme. Two dominant drivers up front, seemingly destined to battle for the win among themselves, wound up gifting the victory to someone else. In the Cup and Xfinity races, that was due to contact while pit strategy doomed Sheldon Creed and Brett Moffitt in the Truck Series. It’s yet another reminder no race is over until the checkered flag falls on the final lap. Darlington and unpredictability go hand-in-hand at one of the sport’s toughest tracks.

Those storylines leave plenty to write about in this week’s NASCAR Stat Sheet.

Entering the playoff opener at Darlington, many people; fans, media and other teams thought Austin Dillon was getting bounced after the opening round of the postseason. But as college football analyst Lee Corso is known to say: Not so fast, my friend.

The race started off poorly for Dillon, as the team mixed up the front tires, putting the left front on the right side and vice versa. Luckily for the No. 3 team, they caught it before taking the green flag, though it did mean dropping to the back of the field on the initial start for unapproved adjustments.

Throughout the opening two stages, Dillon methodically made his way through the grid, finishing eighth in the second stage. After a cycle of green-flag pit stops during the final stage, the No. 3 car reached the top five. On the race’s final restart, the Richard Childress Racing Chevrolet held serve and settled in fourth. It was clearly the fastest this car had been all night.

Then, the race’s high point happened when Martin Truex Jr. and Chase Elliott tangled for the lead. Their contact allowed Kevin Harvick and Dillon to get by, among others. Suddenly, Dillon had a chance to pull the upset.

Over the final 15 laps, Dillon did all he could to pass the No. 4 Ford, but ultimately came up three-tenths of a second shy on a second win this season, placing second. If the race was 501.3 miles (and this race was plenty long), the outcome may have been different.

Thank you Jesus solid start to the playoffs. I’m sure I’ll be thinking about those last 20 laps for a long time. #AceNation #P2@RCRracing

Regardless, Dillon, an avid sports fan, is trying to bust some brackets, and he’s off to a solid start. The championship longshot now sits eighth on the playoff board, 10 points above the cutline. Plus, the series heads to Richmond Raceway next week, a track where he has sixth-place efforts in two of the past three events.

Saturday’s NXS race (Sept. 5) at Darlington was one of the best events from start-to-finish in all of motorsports this season. Don’t believe me? Watch the ending.

Let's look at the final 7 laps.

I could literally watch those final seven laps on repeat and never get bored. The racing between Hamlin and Ross Chastain was as good as it gets. Since those two duked it out, Brandon Jones capitalized to score his third triumph of the season.

But as those seven laps were highlighted for all the good reasons, Daniel Hemric‘s race was over on lap 2, when he got tangled up in a four-car incident with Anthony Alfredo, Brandon Brown and Ryan Sieg. The 37th-place finish — or, in other words, last — was Hemric’s seventh DNF in 16 races this season for JR Motorsports.

37th today…..the irony in that is something else. When the original car that carried this paint scheme was number 37. Can’t make this stuff up. Trying to remember there is always a bigger plan in place for all of us, no matter how we feel through short term trials and triumphs.

On paper, that looks terrible. So does his 18.9 average finish, which is lower than the likes of Brandon Brown and Jeremy Clements. Those drivers are battling for the final position in the playoffs, in the midst of successful seasons, but run for substantially underfunded teams. Hemric, meanwhile runs for the top-funded Xfinity team out there.

Of course, many of those DNFs this season are out of his control. At Homestead-Miami Speedway in June, Hemric was involved in a huge crash, getting turned by Riley Herbst after a bump-gone-wrong from AJ Allmendinger. In Hemric’s next start at Pocono Raceway, he got caught up in a pileup created when Myatt Snider hooked Noah Gragson (retaliation from an incident at Las Vegas Motor Speedway in February? Maybe.). On the final lap of the opening stage at the Daytona road course, he was turned by Snider.

Overall, Hemric’s had fast cars this year, as he should running for JRM. But it’s been a dismal season for the 2019 Cup Rookie of the Year. Could that mean he’s sitting on the NASCAR sidelines come 2021?

After 15 Truck Series races this season, we’ve got ourselves a points battle heading to the regular-season finale on Thursday (Sept. 10) at Richmond Raceway.

Entering Sunday’s race at Darlington, Tyler Ankrum was ranked ninth on the playoff board, 15 points to the good. Todd Gilliland sat hot on the bubble in 10th, 13 points ahead of rookie upstart Derek Kraus.

While all things could have changed after 200 miles at The Track Too Tough to Tame, they relatively stayed the same.

For the majority of the race, Ankrum ran the best, scoring a total of eight stage points in the opening two stages. Gilliland added two to his point total, earning a ninth-place result in stage two. Meanwhile, it was Kraus that kept pushing, taking the lead on the final restart of the race, only to get passed by Ben Rhodes for the victory with a lap-and-a-half left. The No. 19 truck finished a career-best runner-up.

LUNKENHEIMER: KRAUS DISHES ON A MISTAKE THAT COST HIM THE WIN

The second-place finish gives Kraus a fighting chance going into Richmond, just 10 points behind Gilliland for the final spot. Ankrum, who made the postseason in his rookie year in 2019, managed an 11th-place finish after going for a late-race spin. He did, though, rebound to 11th at the checkered flag, only losing one point to Kraus (+14).

And don’t forget, though they’ve had forgettable seasons this year, you can’t count out Stewart Friesen and Johnny Sauter. The latter has a Xfinity win at Richmond in 2003 and has made every Truck Series playoff since the current format began in 2016.

Buckle up, folks. It’s short track racing on a Thursday night with two playoff positions on the line.