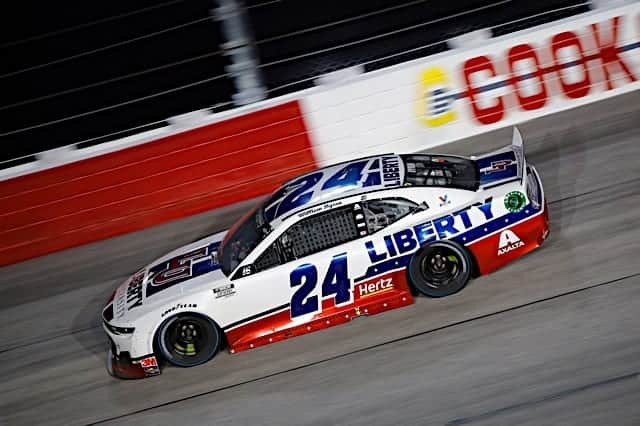 Who… should you be talking about after the Cook Out Southern 500?

Winning at Darlington Raceway isn’t always about beating the competition. Kevin Harvick won his second Darlington race of 2020 by racing the Lady in Black herself, while ahead of him, two drivers forgot that cardinal rule and raced each other instead. Martin Truex Jr. and Chase Elliott made contact late, ruining both their nights and opening the door for third place Harvick to scoot on by.

The driver of the No. 4 Ford struggled a bit in daylight but got better as darkness fell. Crew chief Rodney Childers also used a short-pitting strategy to improve track position not once, but twice. That put the team in position, and when the Elliott-Truex crash occurred, Harvick took advantage. He held off a hard-charging Austin Dillon for the win, his eighth of 2020, leading a grand total of 32 laps on the night.

Honorable Mention: The drivers outside the playoffs often get overlooked in the final 10 races, but despite being shut out of this year’s version, Erik Jones made sure he wasn’t left out of the top five. Jones finished a solid fourth in the race he won a year ago, surging from his 30th starting spot. This young driver is racing for a ride in 2021, and solid finishes like this one certainly raise his value to a team.

What… was the best Cook Out Southern 500 throwback paint scheme?

In execution, you have to love Austin Dillon’s nod to Junior Johnson, right down to his driving suit.  The clean lines on the car were once a common and classy look that later disappeared as sponsors became more and more integral and wanted their brands to be more distinct.  The No. 3 team pulled this one off very well.

Anyone checked Austin Dillon's car for a case of moonshine in the back yet?#NASCARThrowback pic.twitter.com/rXcIldcEYl

In design, it’s hard to match the nod that the retiring Jimmie Johnson gave to fellow seven-time champions Richard Petty and Dale Earnhardt, which drew the admiration of Dale Earnhardt Jr. and Kyle Petty during the broadcast. While his teammates and others through the weekend paid homage to Johnson, he made it about the drivers he looked up to as champions. The font on the sides wasn’t the one used on Earnhardt’s No. 3, but it’s obvious who Johnson is honoring here.

This one will be hard to match in meaning for years to come. Johnson’s skill will be missed in the Cup Series, but perhaps it’s his class that will be harder to replace.

Pole sitter Elliott dominated Darlington’s early laps, leading the first 71, but as day turned to night, he struggled with handling. A brush with the wall only made matters worse in stage two, seemingly taking him out of contention. But the No. 9 car came back to him late, and a little dose of pit strategy combined with a timely yellow handed Elliott the lead.

He kept it with 25 to go before tangling with Truex, who moved up the track on Elliott before clearing the No. 9. The contact sent Truex to pit road and relegated Elliott to 20th after leading 114 laps on the night.

Last week’s winner William Byron didn’t have a winning car; he didn’t even have a top-10 Chevrolet for much of the night. But his car came together in the final stage, leading to a surprise fifth-place finish that was the best of the Hendrick Motorsports quartet. It gives Byron a little playoff momentum, too, as he now has three straight top fives and is in decent position to make the second round thus far. Keep in mind Byron didn’t have a top-five finish in 2020 until the middle of last month.

The most recent Darlington winner, Denny Hamlin, struggled with a loose car in the first stage. However, he chased the track well enough to slide inside the top three entering crunch time. That’s when he made a costly mistake, midway through the final stage that kept the No. 11 a step behind. Preoccupied with racing Aric Almirola for position, Hamlin didn’t signal to the cars behind that he was pitting. The end result was a tangle with Johnson that cost the No. 11 Toyota more than 10 positions by missing pit road.

Ever the professional, @JimmieJohnson politely directs other drivers to pit lane. Sportsmanship – pass it on. #NASCAR #TooToughToTame pic.twitter.com/z7KTF0LdyY

After that, with fewer than 50 laps to go, there simply wasn’t enough time for Hamlin to race for a win. An untimely yellow trapped the car further back in traffic and he didn’t make gains after one final stop. A 13th-place finish is just the fourth of Hamlin’s career at this track outside the top 10.

Ryan Blaney, who had to start at the rear after his team accidentally left a ballast weight in the car, was able to climb through the field in stage one. However, an unscheduled pit stop just as the green flag dropped on stage two dropped Blaney off the lead lap. The No. 12 car never really recovered from there, as he couldn’t get back onto the lead lap and finished 24th.

More importantly, the pre-race inspection penalty cost Blaney crew chief Todd Gordon for the race along with 10 crucial driver points. He’s now below the playoff cutline with two races to go and Richmond Raceway on the horizon, a track where Blaney has struggled in the past.

They don’t call Darlington the Track Too Tough To Tame for nothing. Between Truex and Elliott tangling late and Hamlin’s costly failure to signal for a pit stop, the track took her share of victims from contention, drivers limping home with little to show for it other than some wounded pride.

And that’s what makes Darlington so great: it’s still a driver’s track in that if drivers forget that cardinal rule of racing the track first, they will decide their fate and it’s usually not pretty. Managing tires, planning pit strategy, and sometimes holding back until the end absolutely matter. As a result, the Cup race was authentic and unpredictable. They should be racing at Darlington three times every year.

NASCAR heads to Richmond for its lone visit of 2020, and it’s a pivotal race in the first round of the playoffs. For the four drivers already needing to dig out of the below-the-cutline hole, only Clint Bowyer has any notable success; with a pair of wins, Bowyer could give himself a boost there. Cole Custer only has one Cup start at Richmond, so it’s hard to judge how he might perform, but for Blaney and Matt DiBenedetto, there couldn’t be a more difficult place to travel on the schedule. Both have an average finish of below 25th through at least eight career starts, making this short track oval one of their worst.

Both drivers will need to improve on that under the pressure of the playoffs or bank on a win at Bristol Motor Speedway in two weeks.  Each option isn’t exactly a walk in the park, so the heat is already on for the drivers facing elimination.

How… important is throwback weekend?

NASCAR’s history is an incredibly rich one, and to keep it at the forefront for a weekend is important as more fans fail to understand where the sport came from and grew. At least there’s an inherent advantage with stock car racing. As a group, race fans are incredibly lucky, because many of the places and people who make up that history are still around NASCAR in come capacity and are available for fans to interact with.

As a fan, you can also sit in the stands at Darlington and feel the ghosts thick in the air.  You can go to Martinsville Speedway and don’t have to wonder what it looked like back in the day. You can talk with NASCAR Hall of Fame drivers at various events, and through it all, fans become a part of the story themselves. The sport’s history is a beautiful mix of then, now and everything in between.  It should be embraced and, at least for this weekend, it was celebrated with the honor it deserves.

i must had seen a different race. typical leader get out front and no one catch up til a caution. if Johnson’s car had some silver or red fans would had known it was Earnhardt’s colors. but him wearing petty’s cowboy hat and earnhardt gargoyles was great.

who will be on pole at richmond? hamlin? I say we invert after it’s determine who has the pole. doesn’t get mixed up much on pit stops. there are other teams racing besides 16.

Six leaders. All drivers in the chase. Imagine that!

This is a pattern now. NBC never mentions DW or Jeff Gordon’s name during the Southern 500 race. How petty of them because they work for a different network. They have won 5 and 6 times respectively.