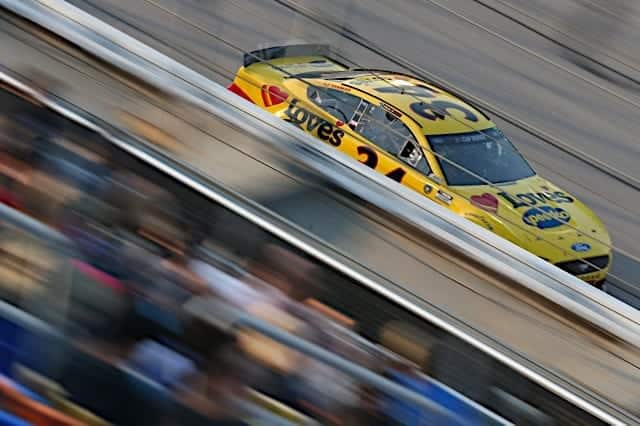 Michael McDowell spent numerous weeks being highlighted in this category earlier in the season, as he and his Front Row Motorsports teammate John Hunter Nemechek divided most of the top finishes between themselves. Lately, things have taken a less favorable turn. Coming into Sunday’s event at Darlington Raceway, McDowell had finished outside the top 20 in four of the previous six races. Even in the two races he did well at (both in Daytona), he still wasn’t the highest underdog in either.

Finally, McDowell got to stand atop our proverbial podium at the end of the Southern 500 with his 16th-place finish. The No. 34 Ford struggled early on, but McDowell slowly worked his way through the field during the final stage.

After the race, McDowell talked about the uphill battle.

“Well, that was a really positive end to what started out as a pretty tough day for our No. 34 team.” he said. “We didn’t unload exactly how we had hoped to start the race, but Drew [Blickensderfer] and the guys did what they do best and made our race car a lot better by the time we took the green flag for the final stage. Overall, it was a pretty decent points day and another top 20 to add to our season. I definitely wanted that top 15, coming up just one position short, but we’ll take what we can get.”

Well … no one. Once again, the relative lack of contenders falling by the wayside didn’t leave much room for underdogs to luck into a good finish. None of them were able to crack the top 20 at the checkered flag. Oh well. Better luck next week.

The NASCAR Xfinity Series tackled the egg-shaped South Carolina oval on Saturday afternoon, and Ryan Sieg added another chapter to his long list of great runs that still haven’t resulted in victory. Sieg finished third, equaling his best finish of 2020 and tallying his fourth top five showing this season.

Other dogs who finished in the top 15 were Austin Hill in ninth and Sieg’s teammate Myatt Snider in 10th. Additionally, BJ McLeod wound up 14th, one spot ahead of Josh Williams, who landed in the top 15 yet again.

On Sunday, the NASCAR Gander Outdoors Truck Series made its return to Darlington. Derek Kraus very nearly pulled off an underdog win before surrendering the top spot to eventual winner Ben Rhodes during a green-white-checkered sprint to the finish.

Joining Kraus in the top half of the rundown were Timmy Hill in ninth, teammates Bayley Currey and Ty Majeski in 12th and 13th, respectively, and Tate Fogleman rounding out the top 15.

The Cup tour goes short tracking again this weekend at the 0.75-mile Richmond Raceway. Bubba Wallace has run well on short tracks this season, and I’d anticipate another solid performance. Nemechek also has a decent record there and could be in the running for a top-15 spot at the end.

As for the Xfinity Series teams, most are probably just relieved that the driver who won three of the past four at Richmond, Christopher Bell, won’t be participating. But keep an eye on Jeremy Clements. He’s finished in the top 20 three times in those same four races, including an eighth in 2018.

It will be another nostalgic return for the truck racers, who will race at Richmond for the first time since 2005. Only two drivers in that race will participate in this one, so it’ll be anyone’s guess as to who will do well. Kraus has been on the verge of becoming a winner and Richmond could be his chance to break through.

How awesome for the Truck Series to come back to Darlington? AND getting our first top 10 of the season in the Jerry Hill Throwback paint scheme! It was a smooth day. Our truck drove great from start to finish. Looking forward to carrying this momentum into Richmond! pic.twitter.com/8GgG81sRKf

Was hoping to grab one more spot before the end, but still another Top-20 finish to add on the season and a decent points day as well.

What an amazing day for the #39 CMR Construction & Roofing Chevrolet. We got involved in a wreck on lap 2 but the team never quit and came back up thru the field with a beat up race car and finished 3rd. Very proud of the entire @RSS383993 team and looking forward to Richmond. pic.twitter.com/dzfN4lNMUR