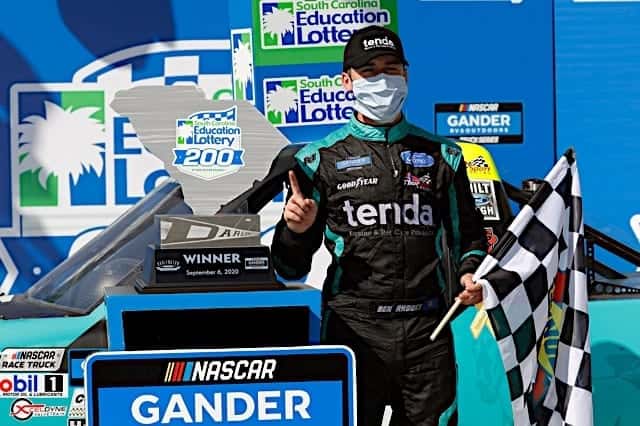 In a Nutshell: Ben Rhodes snapped a 48-race winless streak in the NASCAR Gander RV & Outdoors Truck Series when he beat Derek Kraus on an overtime finish at Darlington Raceway Sunday afternoon (Sept. 6). A late caution set up a two-lap dash to the finish, and despite Kraus taking the initial edge, a slide across the track gave Rhodes the upper hand to score his third career win. Austin Hill, Grant Enfinger and Christian Eckes rounded out the top-five finishers.

A pass on the outside gets it done!

Much has been written this season about Derek Kraus and how well he’s run behind the wheel of the No. 19 Toyota, fielded by single-truck team McAnally-Hilgemann Racing. After all, the rookie opened the year with a fourth-place finish at Daytona and backed it up with six top 10s in the first nine races after the series returned from its COVID-19 stoppage. And up until an electrical issue on Daytona’s road course left him with his first DNF this season, Kraus was in position to make the playoffs.

Fast forward to Darlington, where much of the field took the green flag without any experience at all behind the wheel of a truck. Kraus struggled early in the race, hovering toward the back of the top 20 for much of the time.

Inside 30 laps remaining, Kraus was finally able to break into the top 10, and a late-race call to stay out under the final caution allowed him to restart on the front row alongside eventual winner Ben Rhodes. A sudden opportunity to score the victory was there.

Kraus almost cashed in. Despite a strong restart, a small mistake ended up costing him the lead and the victory.

“Kevin (Bellicourt, crew chief) up on top of the box made a really good call there at the end,” Kraus explained after the race. “Got a good restart and did everything I needed to, but there off of [turn] two – I got really loose off of two. It was my mistake, but overall I felt like it was a great day. We struggled some in the beginning, but Kevin got this NAPA Filters Toyota Tundra tuned up for the end of the race.

“I got loose and kind of just gave it to him. I feel like if I would have been able to get a good run off of two and make no mistakes, it would have definitely been harder for him to pass me. I feel like his truck was probably a little bit better than mine, but with clean air, my truck definitely handled better.”

The second-place run is a career-best finish for the rookie and his third top five this season. He currently sits just 10 points below the playoff cutline heading into the final race of the regular season at Richmond Raceway next weekend. Don’t count him out just yet.

After starting side-by-side on the front row, Brett Moffitt and Sheldon Creed put on a show, leading a combined 145 of the first 147 laps and splitting the first two stage wins (Moffitt, stage one; Creed, stage two).

In fact, with Creed out front by a decent margin and the laps clicking away, it looked like the GMS Racing teammates would once again finish 1-2. But a caution with just two laps remaining tightened up the field and left crew chiefs to make the decision of whether to bring their driver down pit road at a track that’s notorious for tire falloff.

Both drivers, along with third-place runner Austin Hill, headed down pit road for a quick stop before the end of the race. However, the remainder of the top 10 stayed out, costing them precious track position. Of the trio, Hill restarted the highest in 11th.

To make matters worse for Creed, he was nabbed for speeding on pit road and forced to the back of the field for the restart.

Heartbreak for the No. 2 team! pic.twitter.com/JsAmOWp2Cd

Instead of what appeared to be a surefire fourth win this year, Creed was left to settle for an 18th-place finish that doesn’t even begin to tell the story of the dominant day for the No. 2 team.

“If more would’ve come, it would’ve helped our situation there. Man, that one hurts,” Creed said after the checkered flag flew. “I don’t want him to hang his head about it. I trust Jeff (Stanckiewicz, crew chief) and this stuff happens all the time. I’ve never seen this place before today, and to go and do what we did, we gotta be proud of that.”

For Moffitt, no penalty meant he was able to race his way to 10th on the final restart. But it was hardly the win the driver of the No. 23 Chevrolet has been chasing all season.

In a tweet responding to Spencer Gallagher, who’s involved in the running and ownership of GMS Racing, Moffitt stated “frustrating is an understatement,” and that pretty much says it all.

Despite the disappointment, both Creed and Moffitt are locked into the playoffs. Creed already has three wins to his name and is in on wins, but Moffitt’s run on Sunday mathematically locked him into the playoffs as well.

The way this duo, along with rookie teammate Zane Smith, have been running this season, it’s hard to believe the championship doesn’t go through GMS Racing in some way. However, these kinds of mistakes can’t pop up often during the playoffs; pit strategy will continue to make a difference plenty more times in 2020.

Another tough day for @JohnnySauter.

He heads to the garage just laps away from the finish. pic.twitter.com/JwXy8Kzhwr

Glad I came to @TooToughToTame today! It was a lot of fun with All the @DGR_Crosley guys! They built a bad to bone truck and @DavidRagan passed a lot of trucks! Just did not end well but the finish doesn’t tell the story! @FordPerformance

Rookie of the Race: Kraus

Good execution today in our @Safelite Tundra, p5. Fought grip all day – everyone @KBMteam worked hard to get us in position. Onto Richmond – locked in the playoffs, let’s go have some fun. ?

P6! Ran in the top-5 for almost all the race! Very performant Toyota Tundra No.4 @Mobil1 | @canac_ca. Great team strategy (pre-race & on track). We took a chance to get in the pits to finish the race with new tires (last yellow). P14 on the restart with 3 laps to go in overtime. pic.twitter.com/Sw99ukD8So

That was a tough one, had a bad pit stop which out is back to 18th we drove back up to 5th fences it on my own. Then got stuck back there and kept getting used up. onto one of my favorites @RichmondRaceway!

Points Update: Austin Hill expanded his lead over Brett Moffitt, who moved up one spot, to 38 markers with just one race remaining in the regular season. Zane Smith dropped back to third, followed by race winner Ben Rhodes. Despite having the most wins this season, Sheldon Creed sits just fifth in points.

Rookie Christian Eckes sits just seven markers outside the top five in sixth and holds a 25-point advantage over veteran Matt Crafton in seventh. Grant Enfinger, Tyler Ankrum and Todd Gilliland round out the top 10.

With a single race remaining to set the playoff field, the bubble remains a compelling story. Ankrum holds a 14-point advantage over the cutline in ninth. Gilliland remains in 10th but now sits just 10 markers ahead of Derek Kraus in 11th. Every single point at Richmond Raceway next weekend can make or break the playoff hopes for all three of those drivers. Plus, there’s capable drivers outside the top 10 (like Sauter) who could win and squeeze the bubble even further.

Up Next: The Truck Series has a short week as it heads to Richmond Raceway this Thursday night for the final race of the regular season. Coverage for the ToyotaCare 250 begins Sept. 10 at 8 p.m. ET on FOX Sports 1; the race can also be heard on your local MRN affiliate or SiriusXM NASCAR Channel 90.