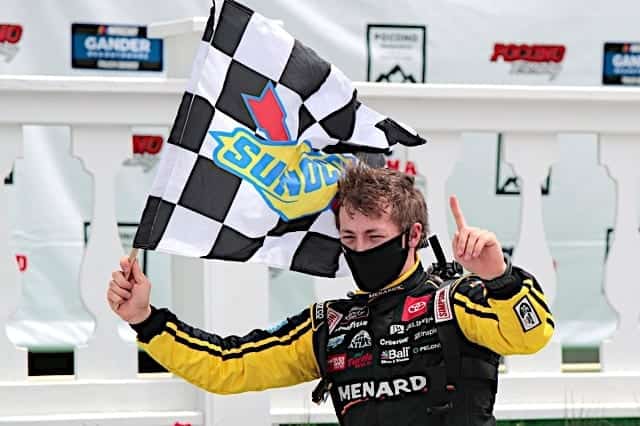 Did You Notice? … Brandon Jones won his third race of the NASCAR Xfinity Series season at Darlington Raceway? Jones capitalized on a wreck in front of him, when the top two cars driven by Denny Hamlin and Ross Chastain hit the wall heading to the white-flag lap. But Jones put himself in position to win and continued his career year in the series. He’s got as many top-five finishes (eight) as the last two years combined and is a bona fide Championship 4 contender.

Jones is potentially on his way to becoming NASCAR Cup Series material. The problem? There’s no room for him there.

This 23-year-old is one of many NASCAR prospects throwing down successful results but looking to find a successful route to promotion. As a Toyota driver, Jones has just one competitive team with manufacturer support he could move into: Joe Gibbs Racing. It’s a four-car organization whose current driving corps suggests there’s no room at the inn for at least two years.

MASSIE: BRANDON JONES NEEDS TO ‘WIN A BUNCH’ BEFORE MOVING TO CUP

That four-car team just replaced Erik Jones, a playoff driver last season, with Christopher Bell in its No. 20. The other three teams boast the reigning Cup champion (Kyle Busch), the 2017 Cup champ (Martin Truex Jr.) and the 2020 Daytona 500 winner/top JGR title contender this season (Denny Hamlin). None of those drivers are looking to retire anytime soon and are still relatively young (Truex, the oldest, turned 40 in June).

That leaves Jones with limited options despite a resume that could be Cup ready by 2022. Heck, if Jones goes on a run in the NXS playoffs, you could make an argument he should be given a shot next year.

He’s not the only one forcing difficult decisions. Chase Briscoe has won six NXS races and is a co-favorite to win the series title. Stewart-Haas Racing is likely to bring him up come 2021, but if they do? It would mean replacing a driver who made a NASCAR playoff appearance this year in Clint Bowyer.

The choice for Team Penske and Austin Cindric is even tougher. The driver of the No. 22 Ford in Xfinity had a streak of five wins in six races this summer. (mustering a second-place finish in the other). Cindric’s skills are clearly Cup ready, yet Penske has neither the money/desire to expand to a fourth Cup team. Its current roster is composed of the popular Ryan Blaney (playoff driver, Talladega Superspeedway winner in 2020), 2018 Cup champion Joey Logano and 2012 Cup champ Brad Keselowski. Keselowski, at age 36, is the senior member of the group and shows no sign of slowing down (winning three races thus far in 2020).

Most assume, then Cindric will wind up at the No. 21 Wood Brothers Ford driven by Matt DiBenedetto. But does Matty D really deserve to lose his ride? He’s in his first season running for a single-car outfit as the handpicked replacement by its former driver, Paul Menard. All he’s done is make the playoffs his first season, besting the average finish Blaney or Menard had in the same ride. In fact, his 15.3 average is the best for any Wood Brothers full-timer since Morgan Shepherd back in 1994. Add in DiBenedetto’s popularity and relative youth (age 29), and it seems like the perfect foundation for growth.

But with Cindric in the pipeline … it might not be enough. The Penske team president’s son needs a home somewhere, right? And DiBenedetto may just be the tip of the iceberg of drivers ending top-tier careers before they’d like. Just take a look at the landscape at the Cup level after Jimmie Johnson’s retirement.

Considering Johnson’s, Jeff Gordon’s and Tony Stewart’s recent retirement ages (44-45) that’s not a long list of upcoming retirees. Harvick’s not going anywhere; he’s a championship favorite this year and signed through 2023. Maybe Newman and Busch open up some seats after 2021? Could some prospects slide in there? And if so, what good will it do them? Neither of their organizations have been a winner this season with only one of their four cars (Kurt Busch, No. 1) making the playoffs.

The answer, of course, is for more owners, more manufacturers and more opportunities to open up spots in the field. But that’s where the current economic conditions have diversity going in the wrong direction. Single-car, independent-style teams are in trouble. Leavine Family Racing has already sold their charter and will close after 2020. Germain Racing is potentially up for sale after losing GEICO as a primary sponsor. Richard Petty Motorsports could be in trouble if Bubba Wallace moves elsewhere.

All of that condenses already shrinking opportunities for these NASCAR prospects. It could also lead to situations where they languish in lower series for several more seasons. Why should Hendrick rush to move anyone up after they find a driver for the No. 48? If, say, Erik Jones becomes the guy (purely hypothetical), then all four 20-something drivers make the postseason in 2021, why axe any of them?

That could mean trouble for drivers like Brandon Jones, Harrison Burton, Noah Gragson and others on the brink of making it to Cup. There’s only so much room at the inn.

Sometimes, having patience with a driver pays off. Remember the days where someone could take years to grow and develop? Snap judgments can snap someone’s career in half. Daniel Hemric, demoted to NXS after one disappointing rookie season in Cup, is the latest example of these trends encapsulating the sport. He’s potentially on the way out altogether after a disappointing part-time season with JR Motorsports.

If owners need to exercise more patience with these prospects, they’ll have a better chance to cash in. Can this sport fix its financial situation to the point they’ll be able to do it?

Did You Notice? … The proposed Auto Club Speedway renovation into a short track, revealed in a surprise announcement Tuesday (Sept. 8) is a tacit admission by NASCAR its cookie-cutter expansion was a mistake. If approved, the move would put a fourth short track (categorized as less than one mile) on the Cup circuit for the first time since North Wilkesboro Speedway left in 1996.

It’s the next step in an upcoming series of schedule tweaks involving intermediate tracks. Charlotte Motor Speedway’s second oval race was turned into an infield road course for the 2018 playoff race. Chicagoland Speedway didn’t even have a race this year with NASCAR seemingly more interested in developing unused land. Rumors have swirled around other 1.5-mile tracks adopting the ROVAL model for one of their events.

Before NASCAR’s schedule expansion began in earnest in 1993, the schedule had 29 events. Eight of them (27.5%) were on short tracks, five were on one-mile ovals, four were on superspeedways, two were on road courses and two were on the Tricky Triangle that doesn’t really fit any category (Pocono Raceway). Just eight total were in the “intermediate” category: two races apiece at Atlanta Motor Speedway, Charlotte Motor Speedway, Darlington Raceway and Michigan International Speedway. That’s the same percentage (27.5%) as short tracks… and that’s including Darlington, a unique track in its own right.

Compare that to where the NASCAR expanded schedule wound up by 2011, when Kentucky Speedway was added. Only six races were on short tracks, six were on one-mile ovals, four were on superspeedways, two were on road courses and three were at 2.5-mile “tracks all their own” (Pocono, Indianapolis Motor Speedway). The remaining 15 events were held at a variety of intermediate-style racetracks, cookie-cutter ovals that made up 41.7% of the schedule.

NASCAR concluded – rightly so – those numbers need to be rectified. Kudos to them for investing in changes, and I suspect this renovation is just the tip of the iceberg.

i don’t know about noah in cup. he’s a major hot head and a cup owner and sponsor might not like being called to the trailer a lot.

matty d should stay with wood brothers for another season. he’s more than earned that ride with making playoffs.

Don’t forget also why the 48 ride isn’t filled yet. At the top of every owners wish list is Kyle Larson. So add one more driver to that long queue….

well recently the 88 was sponsored by chevy something or other. not a big sponsor in the grand scheme of things. one of the rumors is they’ll fold the 88 and bowman will go into the 48.

IT WAS AMAZING THAT THE ARTICLE COULD BE THAT LONG AND NEVER ONCE MENTION LARSON. DO YOU GET PUT IN FRONTSTRETCH JAIL IF YOU EVER USE HIS NAME?? HE HAS TOTALLY ENERGIZED A NEW LEGION OD SPRINT CAR FANS TOTALLY BY HIMSELF WITH 36 WINS THIS YEAR !!

Still good luck finding a sponsor that wants their name associated with him.