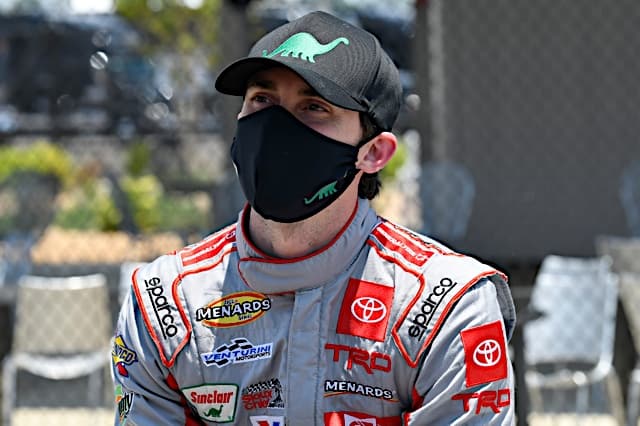 Although it’s just his second full-time season driving the No. 25 Venturini Motorsports Toyota, Michael Self is arguably the veteran of the ARCA Menards Series. The 29-year-old has made 53 starts in ARCA with nine wins, 34 top fives and 39 top 10s. Moreover, he ran five full-time seasons in the now-ARCA Menards Series West, accruing eight wins in 71 starts there. He also dabbled briefly in the NASCAR Xfinity Series with seven starts in 2015.

Last year, Self lost the ARCA championship to teammate Christian Eckes in the season finale at Kansas Speedway. This year, he is battling Bret Holmes for the title. While Self has two wins and Holmes only has one, Self leads Holmes by a lone marker after the 14th race of the season this past weekend at Lebanon I-44 Speedway.

Prior to that race, Self spoke with Frontstretch to discuss his career, how he feels racing younger drivers, his achievements and his thoughts on the first season with NASCAR running ARCA.

Mark Kristl, Frontstretch: At age 29, you’re arguably the veteran in ARCA. What have you taught the younger drivers and what is it like racing against them?

Michael Self: For the first part of that question, I notoriously race against a lot of younger drivers when it comes to road racing. I have worked the Trans-Am TA2 series and have a couple of clients. I work with a lot of the up-and-coming NASCAR kids who do not have a lot of road course experience. A lot of guys have come through, and frankly, that has been a lot of fun for me.

We have a few drivers who race for Venturini Motorsports in only a couple of races. For example, Ryan Repko this year, who ran the superspeedways and the intermediate tracks with us. Ryan had little experience on those types of tracks, so he came over and asked a lot of questions such as drafting on the superspeedways, aerodynamic situations on the intermediates. That is the most common question or feedback I get asked.

When I was a younger teenage driver, I was too stubborn about asking questions or for advice. Now, a lot of these kids are open to learning. I respect that so much, because I know I made life much more difficult for myself by not asking those questions. No matter what they have accomplished, these kids want to learn [and] receive advice, and I think that is impressive.

It blows me away how talented some of these kids are. They learn quickly and get up to speed. It’s shocking, [and] a little bit frustrating, because I want to feel like I have an advantage in some of those places. Yet some of those kids come to these tracks for the first time and drive away from me. I am thrilled to race alongside those next faces of NASCAR, say I beat them sometimes when they were younger. Those younger drivers, especially my teammates Christian [Eckes] and Chandler Smith, I have a different viewpoint, which is valuable.

Kristl: You’ve made 53 ARCA starts thus far. What is it that makes ARCA so special for you?

Self: It has been a good home for me since I partnered with Sinclair Oil Corporation. When they came on board in 2016, they wanted to start small by dipping their foot into racing. ARCA was a good, reasonably well-priced place to have that sponsorship. With their budget, ARCA made sense. ARCA allowed them in, although they are in the fuel category, which is difficult to navigate in NASCAR due to its restrictions. It’s worked for them; we have built great relationships with Venturini Motorsports and race there competitively.

I like racing in ARCA, for the most part. This year, though I have been frustrated with all the rule changes. I do not know if those were for the best, such as with the reduction in horsepower and some of the mechanical changes. I have been affected negatively. But overall, I have found a solid home in ARCA.

Kristl: In 2017, you told Frontstretch you wanted to make a home in the NASCAR Gander RV & Outdoors Truck Series. Is that still your goal?

Self: If the opportunity arose, I would love that. However, I do not know if that is realistic. I have not received many opportunities to race in NASCAR. I thought I might make some Truck Series starts this year, but due to the COVID-19 impact, it slipped away.

I would be happy to race there. At this point in my career, Truck Series racing is realistic. For the road courses, IMSA is realistic too. Getting paid to drive racecars is something I am fortunate to do, and I would love to be able to continue doing it.

Self: It would mean a lot; it is something that has eluded me. Last year was back-breaking. It was tough to stomach because I feel like I lost the championship on some technicalities. We weren’t treated fairly compared to some other teams. It cost us 75 points, and I lost the championship by 25 points. We for sure shot ourselves in the foot with mechanical issues last year. We performed like a championship-winning team.

This year has been a tremendous struggle, especially after the break. We have not performed as well as we should, except for the Daytona [International Speedway] road course. It has been head-scratching, but we are digging deep to bring fast cars to the racetrack, and I have been working to perform better as the driver. Any championship is the goal of anyone who is racing. I would let my team down by driving in championship-winning equipment and not earning it; that is the goal.

Kristl: ARCA arguably has a more diverse schedule than any of the main three NASCAR series. What is your favorite racetrack, and why?

Self: It must be the Daytona road course. I had an absolute blast there for a track that was added to the schedule late. The circumstances within the race certainly helped; it was a night race with wet conditions on a road course. It was a unique opportunity to race there, and I am unsure whether we will race there in the future. That win was special.

Kristl: You finished second in the ARCA standings last year, you lead the standings this year, you’ve won both in the then-K&N Pro Series & ARCA and you’ve made seven Xfinity Series starts. What has been a highlight of your racing career?

Self: A highlight for me is the off-track formulation and growth of the Sinclair Oil sponsorship. Finances took me out of the seat for a while, but I was committed to figuring it out. Putting the Sinclair sponsorship deal together with my wife and dad, and it became a full-season effort, is something I am extremely proud of. It is not something done often, especially at the ARCA level. It has helped me build a network outside of the racetrack. It’s paired that sponsorship deal from a business and marketing standpoint to what I am learning in school. Hopefully, these things last with me long after racing.

We started with a one-race deal in 2016. Now, we have grown that into my second full-time season. That took a lot of hard work; the company must believe in the platform to spend that much money. It has been a great reward for me.

Kristl: Only 14 drivers competed in the race at Lebanon I-44 Speedway. What is something series officials could do to increase the car count?

Self: Both entities tried to make changes to the car count higher by changing motors, some mechanical changes, etc., but now here we are. There are lower car counts now than over the last couple of years. Frankly, some of those changes have left me displeased with the series. I do not like the rule changes. The cars are less fun to drive. It has been a lot of work and a higher expenditure for Venturini Motorsports. I do not agree with some of those changes.

I know officials are trying, and sometimes changes are demanded. Unfortunately, I don’t know if making rule changes were the best way to improve the series. Right now, it is costing teams more money. Couple that with the pandemic, and teams do not have any extra money. Teams cannot afford to spend extra money to buy another motor to be competitive.

Every time you make a change, something is going to be better than the other. It is too hard to make everything equal when it’s not the same. At Venturini Motorsports with the motor situation, on the short tracks, we must run the Roush-Yates [Engines], the former K&N motor, to be the fastest. We had to buy a lot of those motors to stay competitive. For the teams without those funds, why would you want to go to a racetrack where you are unable to stay competitive?

Sadly, I can sit here and tell you about the negative impact of it, but I lack an answer to make it better. Things must be cheaper somehow. Budget-wise, it is comparable to run a top-tier ARCA car as it is to run a mid-pack Truck Series team. For those drivers seeking to move up, it makes sense for them to save money by skipping the ARCA level and getting more exposure for their sponsor in the Truck Series.

It is likely massively cheaper to run a super late model than in ARCA, too. With these low ARCA purses and costs getting wildly out of hand, it makes more sense to keep racing super late models than race part-time in ARCA. How do you minimize those costs? I know the folks at NASCAR and ARCA are asking those same questions. It is a conundrum.

Kristl: The COVID-19 pandemic has changed racing, the ARCA schedule, if fans are allowed, etc.  How have you dealt with those changes?

Self: Race weekends are now shorter. We can turn the Lebanon I-44 Speedway, Toledo Speedway and Bristol Motor Speedway events into one-day shows. For me, with a wife, home, family, school, etc., it is nice to only have one day away from home. When you are out at hotels and restaurants, you still have those concerns about COVID-19 as well. You are nicely able to avoid that with one-day shows.

At the racetrack, the limited practice is different. Because we have been off, the limited track time has not been great for us. We have not had time to refine our setups, hone our stuff and ultimately figure out where we have been struggling. That changes a little bit at some of the short tracks.

These one-day shows are beneficial for eliminating costs. You are eliminating lodging, food, costs, etc. so that is a step in the right direction.