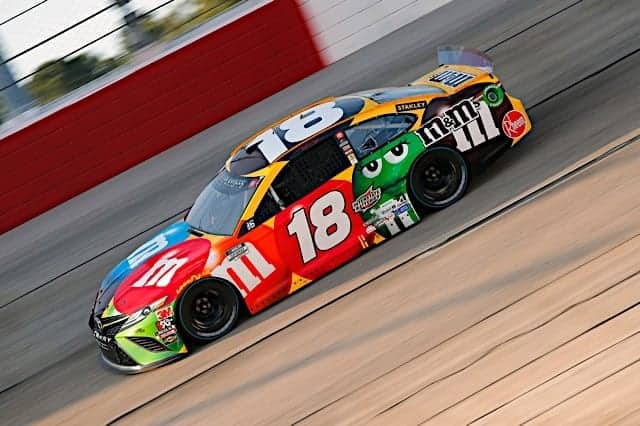 Kyle Busch has had one of the worst years in his NASCAR Cup Series career this season, but that has not stopped him from making the playoffs in 2020. After the first race of the playoffs at Darlington Raceway, he sits only seven points above the cutline, but after a sixth-place finish, he should be encouraged with how he ran. The defending champion cannot be kept down for much longer, and the question now is, can he make a legitimate run towards the title?

When could we see Busch break through and find victory lane again? Is he truly going to go winless in 2020? What are his chances to realistically challenge Denny Hamlin and Kevin Harvick?

After Saturday afternoon’s (Sept. 5) finish at Darlington for the NASCAR Xfinity Series, discussions arose as to whether or not Hamlin should have even been allowed to race. Hamlin always has this race on his schedule every season, and with Cup drivers still allowed to run this year, it was a given he would be entered. While he battled hard with Ross Chastain for the win, the six-time Cup winner this season even admitted it would have been a lot different if Chastain was not running for a championship. This brings up the topic of if Cup drivers should not be allowed to run Xfinity races when they are in their own playoff race the following day.

Should the rule stay the same, or should NASCAR limit the Cup drivers even more than they already do? If Cup drivers have to run, what would you like to see changed?

Q: Who do you think surprises us in the Cup playoffs and makes a run towards the title? Sam G., Charlotte, NC

A: While this question was probably based on how Austin Dillon surprised us on Sunday night (Sept. 4) with his runner-up finish, I’m not going to pick him as a surprise for the title. There is a chance he can make it past this round for sure, but after that, I’m not sure how he fares.

My pick for this is easy: Kyle Busch. The defending champion is a surprise pick to make a run for the title — what a strange year this has been — but this is a real thing. After the 2020 that Busch has had, there is a chance he can make a run toward the favorites like Hamlin, Harvick, Chase Elliott and Martin Truex Jr., too.

You don’t even have to look that far back as to why he can win it all. He ran arguably the best he has all season at Darlington, being inside the top five the majority of the night until ultimately finishing sixth. The finish does not indicate where the No. 18 Toyota ran, but the competition knew he was there. This is not what we have been able to say that much this season, so he is already progressing in the right direction.

His experience speaks for itself, so he knows what he must do to get past where he’s at right now. Being only seven points above the cutline is not a comfortable position at all, but the Cup Series goes to two of his better racetracks in Richmond Raceway and Bristol Motor Speedway these next two weeks. He will be fine, easily advancing to the Round of 12.

Once Busch starts a streak of solid finishes like we know he is capable of, he will be a threat. A determined Busch is one of the best drivers — if not the best — of this generation. If we get to that point, the rest of the field should look out.

While it will be extremely hard to beat Harvick or Hamlin this year, Busch might have a chance. Not many give him one after how he’s performed this season, but you cannot keep the defending champ down very long, especially a guy of his caliber. This first round will be a test for sure, and if he makes it past with ease, this could turn into a whole different season.

Q: Is it a bad thing to have Cup drivers running Xfinity races near the cutoff race or should it be acceptable up until the playoffs like we have it now? Chris T., Charleston, SC

A: It is not necessarily a bad thing, because these Cup drivers know what they are doing and know how one bad move can influence a championship contender’s season. This is similar to what we saw with Hamlin and Chastain on Saturday with their race for the win in the Xfinity race.

Hamlin even admitted the way he raced Chastain was different because of knowing he was running for a championship. These Cup guys still want to win the race, but they know it is wrong of them to affect a series regular’s race at that point. Even though the two of them got into it, it did not affect Chastain’s finish as bad as it could have been, placing runner-up and better than Hamlin.

Cup guys racing against the Xfinity guys is good. It may not be good for many to watch, but it is good for the young guys to learn. Back when there used to be 10 to 12 Cup drivers run every week, it seemed as if the Xfinity drivers knew they had to step up their game, and it only made them better drivers. Not saying the drivers are worse these days at all, but we do not see that anymore. It seems like we are lucky to have one top Cup guy in the race most weeks.

The rule is perfectly fine the way it is. Let the Cup drivers run up until it matters most, and then cut them out of it once the playoffs are here. As mentioned, these veterans know how much they can affect the outcome if they make one bad move. As Hamlin did on Saturday, that can easily happen to anyone else racing for a win. Chastain could have had that locked up, but Hamlin tried to do what any other driver would do, and that is win the race. I see no wrong there.

We will see Busch racing in Xfinity this weekend at Richmond. Many fans hate it, but he is one of the best to ever run in the series, having won a series-high 97 times. While he may win the race, I believe the Xfinity drivers will only be better than usual going up against an all-time great like Busch. There is nothing wrong with him running the race as long as it’s not in the playoffs.

You will never be able to please everyone with this rule. Many say no Cup drivers at all, some say let them all race. Personally, I loved seeing the Cup guys run, but it was fun when they did not drive for their Cup teams. Seeing them drive for Busch (Xfinity)-specific teams was a ton of fun back in the day. That may not happen again with as much Cup influence is in Xfinity, but that would be fun to see in the future.

ANY TEAM THAT IS LEGAL UNDER XFINITY RULES SHOULD BE ABLE TO ENTER ANY RACE WITH WHATEVER DRIVER THEY WANT. TEAMS AND DRIVERS THAT WANT TO MOVE UP TO CUP NEED THE COMPETITION !!

YOU DON’T HAVE TO YELL!

I’ve always thought the extra practice a Cup driver got running the Xfinity companion race (and to a lesser degree the trucks) created an unfair advantage. With no practices whatsoever due to Covid, it creates an even greater advantage. I don’t like it to begin with but once the chase starts Cup drivers should not be able to run at companion events.