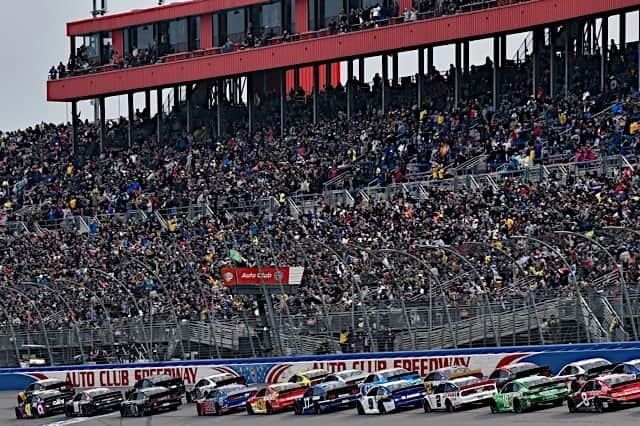 The sanctioning body of NASCAR plans to convert Auto Club Speedway in California into a half-mile short track, according to a report by The Athletic released Tuesday (Sept. 8).

NASCAR submitted a proposal to San Bernardino County on Tuesday. The project would involve changes to the track as it stands, as well as decreasing the overall size of the facility to open up the land. Reportedly called “Next Gen California,” the remodeled track would combine two existing short-tracks’ features: Martinsville’s long frontstretch and backstretch for the straightaways, while corners similar to Bristol’s steep banking would make up the turns.

BREAKING NEWS: NASCAR is planning to transform Auto Club Speedway into a half-mile short track, @TheAthletic has learned. We have the details here: https://t.co/EhMnckUamW

The track would join the aforementioned pair, along with Richmond Raceway, on the Cup Series schedule. The three tracks make up just six of the 36 races on the Cup schedule. NASCAR’s premier division has raced at Auto Club since 1997, with Alex Bowman the most recent winner at the track earlier this year.

“We are still very early in the process, but we are excited about what this ambitious project could mean for our loyal fans in Southern California,” Craig Neeb, executive vice president and chief innovation officer of NASCAR, said in a statement. “This is our first step towards creating a state-of-the-art facility that would deliver the intense short-track racing our fans love, an intimate viewing experience and upgraded suites and hospitality areas that would position Auto Club Speedway among the top entertainment venues in the market.”

According to both The Athletic and FOX Sports’ Bob Pockrass, early designs will reportedly use portions of the current frontstretch to lead into the high-banked turns, placed in the infield grass between the racing surface and pit road, with areas of the current pit road set to become the backstretch. Spectator capacity would be lowered, but seating would be added in the turns, much like the existing short tracks. Victory lane and the garage area would end up outside of the track itself.

A look at the plan for Auto Club Speedway conversion to a half-mile. NASCAR hopeful to start construction after 2021 race for 2022 event. #nascar pic.twitter.com/l4pUg4MkGk

Coincidentally, the announcement comes just a few days before all three of NASCAR’s main series head to Richmond for three days of short-track racing, followed by another set of races at Bristol’s short track the next weekend.

I figured they would just reclassify every track smaller than 2.5 miles as a short track.

So are we going to get our first D-shaped half miler?

With the cars pulling school buses?

In reality who really cares. For whatever reason California just isn’t into NASCAR. It will in all probability be a more entertainIn race then The current track but it won’t increase tv ratings or attendance. So what’s other big deal. They probably should do the same thing to Chicago, Michigan, yAtlanta and Dover.

I want to put this in the class of: stupid is as stupid does. What in the hell is this going to improve. Nascar can’t figure a way to promote a race at the speedway so they are going to build a short track. What to they think that will do to attendance? I really think this is such a bad move.

Who really suffers are all the drivers who routinely take their cars out the AAA speedway for a track day. SoCal just lost a track and the drivers suffer for the 1 time a year event they want to hold. I love the BS “it will open up the land” line…to who? Sounds like a money grab from the County. No way will this place maintain the audience, attendance or other income sources they have now. My guess, race fans will revolt instead of support this move. They already have this sort of track in Irwindale and it gets a small viewership. They should have just bought that tack and made the facility larger…the land is there to do it and it would be MUCH cheaper of an investment.