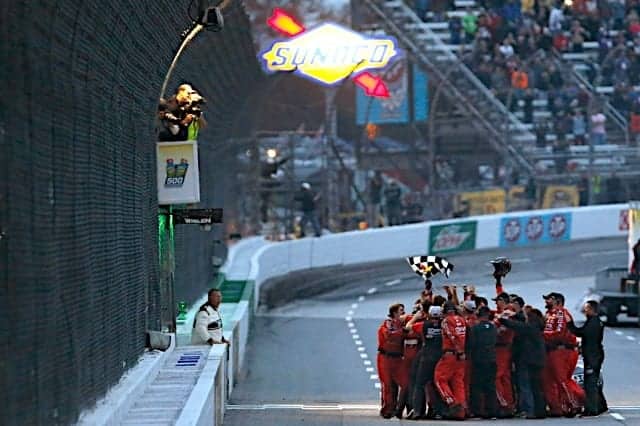 Who can forget Matt Kenseth intentionally wrecking Joey Logano at Martinsville Speedway in 2015? This favorite moment of mine was all set because Logano, who was right in the thick of the championship hunt, drew the irk of Kenseth from a previous incident at Kansas Speedway, which took out the latter of championship contention.

The earth shook underneath the Virginia soil, as the legions of fans erupted in swaths of thunderous cheering when the two foes went careening into turn 1. The remarkable cheering billowed even more as Kenseth became a folk hero of sorts for so many as he emerged from his car. This made-for-TV event was encapsulated by the best feel-good story that year when Jeff Gordon finally made it to victory lane in his final season and earned a golden ticket to the championship race. What became his final career win likely would not have happened if playoff tempers were not so strong. For it is these moments that make playoff racing so unpredictable. ~Zach Gillispie

Kenseth putting Logano into the wall might be one of the greatest NASCAR moments ever. Still can’t believe they suspended him for doing the right thing. ~Danny Peters

Since the dawn of the playoffs, and the single event championship between four drivers in particular, one question that is often raised is how far will a driver go to win a race – or grab a position – to either win the championship or at least get a shot at it. That question was answered in 2014 at Phoenix Raceway, when Ryan Newman used up Kyle Larson to advance to the Championship 4 the following week at Homestead-Miami Speedway. Was it a rubbin’s racin’ incident or a bit of dirty pool? Newman sent it in through turns 3 and 4 and made contact with Larson. That contact sent the No. 42 off line and broadside into the SAFER Barrier at the exit of turn 4.

It’s hard to fault Newman, considering he restarted on the front row with Kevin Harvick with just three laps to go the following week at Homestead. His Hail Mary move against Larson at Phoenix had him in position to win the NASCAR Cup Series championship, despite not having won a race all year. He chose not to recreate his last lap heroics versus Harvick, saying afterwards he wouldn’t want to win a championship that way. ~Vito Pugliese

It was “The Newmaning” because it was like a horror movie. He just kept sneaking through each round without any fanfare until the Larson pass at Phoenix ~Michael Finley

In the end, it didn’t determine the outcome of the title, but the moment that has always stuck in my mind is Jimmie Johnson’s win at Atlanta Motor Speedway in 2004. Hendrick Motorsports had been through hell during the week leading up to the race following the loss of 10 people in a plane crash the previous week en route to Martinsville. But what really stands out is the sheer powerful emotion in victory lane when the entire organization gathered to celebrate Johnson’s win as well as the 10 lives lost. In the end, Johnson fell short of what would have been his first title, but it was a victory of a different sort. It had all the feels. ~Amy Henderson

4. The Moment the Dynasty Began — In a Smoking Heap

The playoff moment that stuck in my mind occured in my first year of watching NASCAR. At the Fall 2006 Talladega Superspeedway race, Johnson was in position to have a good points day while running second on the final lap. That was important as Johnson already used up his mulligan at New Hampshire Motor Speedway with a 39th-place finish. Johnson had a run with HMS teammate Brian Vickers until the No. 25 hooked the No. 48 into Dale Earnhardt Jr. Johnson wrecked and finished 24th.

After Talladega, Johnson was 156 points behind the leader and had to leapfrog seven other drivers. The No. 48 team showed their grit of controlling what they can by finishing in the top two in each of the next five races. The other drivers dropped like flies after Talladega, especially Jeff Burton. Those five races showed the skill of the No. 48 team where they put it altogether.

After that moment, Johnson created a dynasty of five straight championships and seven overall. The question is would Johnson be as motivated to perform well if he stayed in second place instead of wrecking. That moment has to be the tipping point for Johnson’s success. ~Jared Haas

2011 means a lot to me, but it was also a season filled with incredible moments for NASCAR – whether it was the introduction of tandem drafting alongside the new body styles, five first-time Cup Series winners or an incredibly competitive season in which different winners made up half the races. Carl Edwards, Harvick and others largely swapped the top spots in the standings all season, but the playoffs brought out the beast in Tony Stewart, who hadn’t won a race all season.

Stewart won five of the 10 playoff races that year, and the championship culminated in Stewart and Edwards finishing 1-2 at Homestead and in a tie for the title. Stewart earned his third crown by virtue of that final win at Homestead in one of the tightest championship showdowns we’ve ever seen. And it was a would’ve-could’ve-should’ve for Edwards – two of his second-place finishes that year came at the hands of first-time winners (Trevor Bayne at Daytona International Speedway and Regan Smith at Darlington Raceway).

Regardless, one of the most memorable shots that year came from Edwards walking up to Stewart in his car on the frontstretch, shaking his hand and congratulating him at the conclusion of an epic battle. ~Adam Cheek

Though I loved seeing Kenseth punt Logano, the playoffs moment that stands out the most for me is the 2006 Talladega ending. It was around the beginning of when I started following NASCAR fairly closely, and it was dramatic enough that I recapped it for a school assignment.