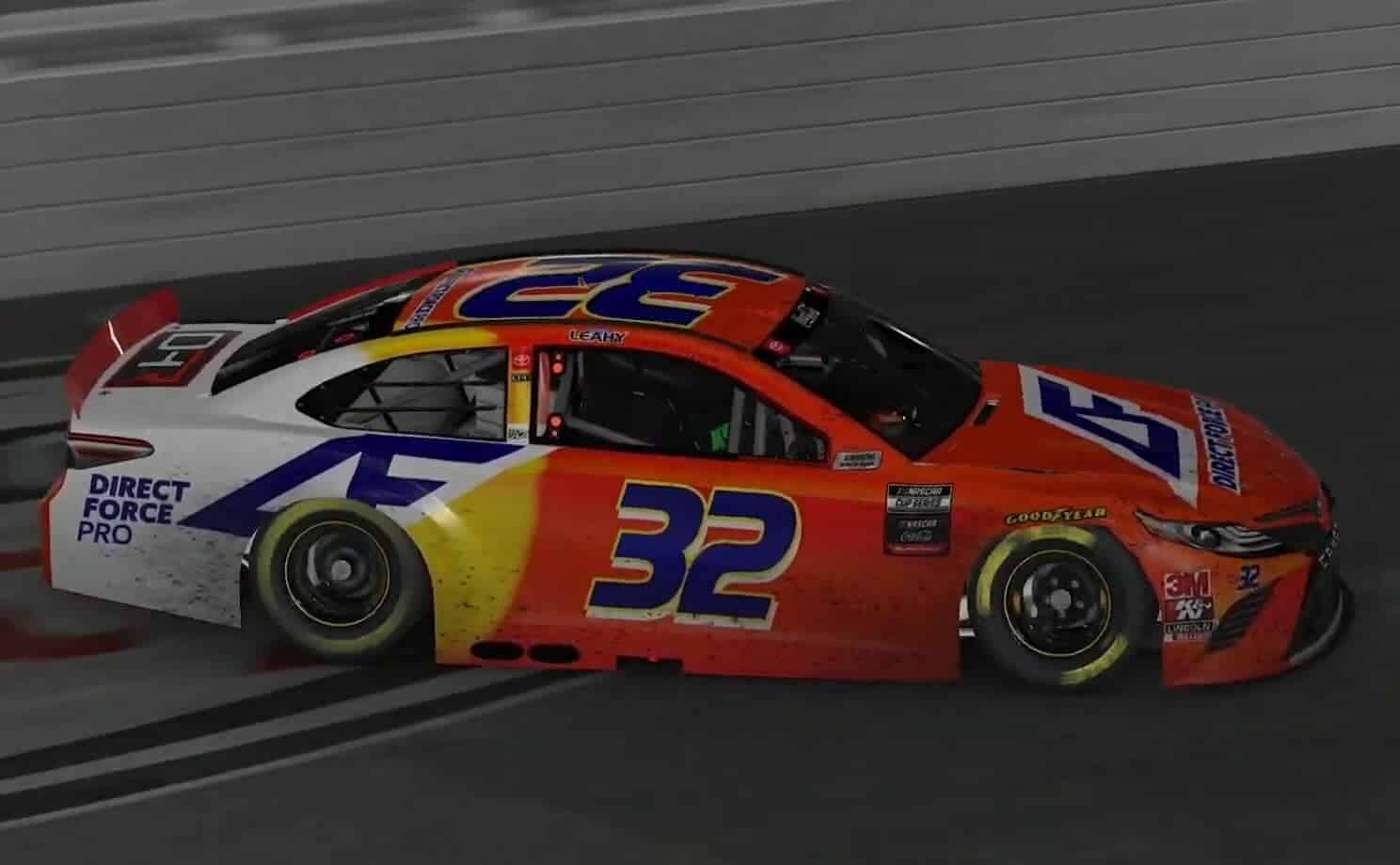 After the NASCAR national series held their throwback events at Darlington Raceway, the eNASCAR Coca-Cola iRacing Series took to the virtual 1.366-mile track Tuesday night (Sept. 8). In the end, Denny Hamlin eSports driver Keegan Leahy stood tall over the competition to win his third race of 2020.

Leahy held the top spot after passing polesitter Michael Conti on pit lane and holding him off on the restart around lap 33. Even after several caution periods and trips down pit road, the No. 32 throwback to Ricky Craven maintained control throughout the race. Leahy led 152 of the 184 laps to claim the victory.

“Honestly I did not expect this win at all, this was my least-prepared for the race of the season…,” Leahy told the broadcast after the race.

”The pass for the lead, I don’t think it was going to happen on the track as Michael Conti was incredibly fast all night. It took me until way past lap 30 in the run to even have some sort of an advantage against him, but he was right on my bumper the whole start of the run. That pass on pit road came as a surprise, I didn’t think I’d get a particularly great pit stop, but that’s just how it goes sometimes — they drop the jack a little bit quicker than the other guy and you get in first.”

CRAVEN GOT EM! Not a door banger photo finish, but I'll take em nice and contact-free any chance I can get. Amazing but EVIL car. Shoutout to @PashalisGergis for being my fill-in spotter tonight. @realVRS #DirectForcePro pic.twitter.com/IVGEwzqZsz

Conti’s No. 8 Hut Stricklin throwback from 1996 earned a runner-up finish, and William Byron eSports driver Nick Ottinger was third. Logan Clampitt wheeled his 1997 Mark Martin scheme to fourth place. Finally, at a place where passing was hard to come by, Malik Ray took his No. 51 Joe Gibbs Racing Toyota from 30th to fifth.

Another noteworthy result came from Chris Overland, who also gained 25 positions to end in 12th place.

The race began with Conti at the helm for almost 30 laps, while Leahy went around Ottinger for second on the opening lap. However, the caution soon came out for Ottinger’s teammate John Gorlinsky, who spun when Graham Bowlin made contact. Zack Novak also was involved in this incident.

That's sums up @znovak15's year. Ride with the No. 90 @SunocoRacing driver as he gets collected in someone else's mistake. Front end is missing. Gonna make the best of tonight… pic.twitter.com/ZU6OP5y1XQ

Then, when the field bunched up for the restart, Blake Reynolds, Matt Bussa, Bob Bryant and several others got caught up in a melee. Bussa’s night ended early as a result of this incident.

Later on lap 52, the two Bobby Allison throwbacks got into trouble with Zalenski. Santiago Tirres’ No. 4 Chevrolet was underneath Zalenski when Jeremy Mullis, who had a strong run behind Zalenski, made contact with Tirres. Tirres then spun Zalenski, bringing out the caution.

The yellow flag came back out again when Casey Kirwan turned Brian Schoenburg into the wall on lap 63.

The race restarted and stayed green for several laps until less than 90 to go when a slower Brandon Hayse Kettelle was turned by Roush Fenway Racing’s Nathan Lyon. Lyon later tweeted it was “100% on me for not checking up hard enough.”

Right after the next restart, Kollin Keister checked up and caused Mullis and Bowlin to spin around.

More Bobby brutality. The @Bobby_Labonte throwback of @BowlinGraham and the Bobby Allison throwback of @jmullisracing go for a loop after a checkup from @KollinKeister.#eNASCAR @iRacing pic.twitter.com/izbFeuUr1f

The final caution flag flew when Ryan Luza and Ray Alfalla got together, which sent Alfalla spinning. Alfalla was running in the top 10 but had been falling back in the last half of the race.

LATE RACE DRAMA ?@rayalfalla keeps it off the walls after a run in with @RyanLuza.

The race stayed clean the rest of the way, aside from some saves further back in the pack. Still, everyone chased Leahy but couldn’t quite pass him, and Leahy tamed the Lady in Black.