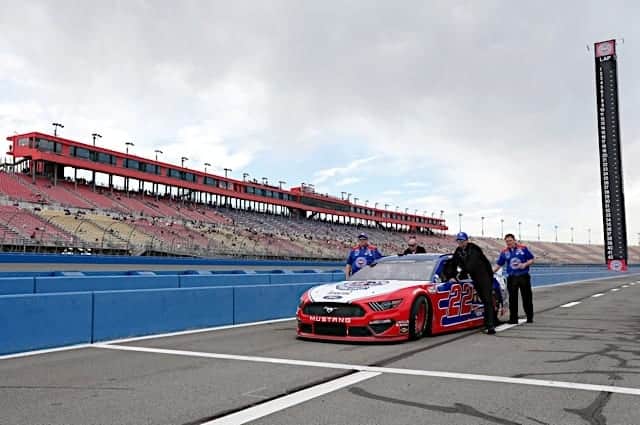 They’re doing what to Fontana?

This week, after The Athletic broke the news, NASCAR confirmed that they are pursuing plans to effectively turn the 2-mile Auto Club Speedway in Fontana, California into a half-mile short track.

The course looks to be a hybrid of all three of the current NASCAR Cup Series short tracks in a way. It will have the current long straightaways of Martinsville Speedway, a slight indent to the left on the frontstretch ala Richmond Raceway and high-banked turns that will remind one of Bristol Motor Speedway.

A look at the plan for Auto Club Speedway conversion to a half-mile. NASCAR hopeful to start construction after 2021 race for 2022 event. #nascar pic.twitter.com/l4pUg4MkGk

This is a great move for everybody. This is a racetrack that was going to end up basically being a West Coast version of Michigan International Speedway in a few years after its eventual repave. If the first race at this new venue is a success, there’s no reason it won’t return to two dates a season.

Having a track like a the shortened Auto Club could open it up as a local racing hotbed, with series such as ARCA West paying a visit. All of the extra land NASCAR will create by shrinking the track would allow the track owner to develop the area around it, such as it has already done with Kansas and Daytona.

How does this move look historically?

Honestly, the fact that shortening Auto Club is almost definitely happening is the direct opposite of the NASCAR of 25 years ago.

Back then, there was a belief that the sport had gotten too big for short-track racing, along with more terrible takes such as speed being the main ingredient to good racing and MC Hammer in general.

This led to a number of big racetracks popping up in the late ‘90s and early 2000s, such as Homestead-Miami Speedway, Kentucky Speedway, Kansas Speedway, Chicagoland Speedway, Texas Motor Speedway and Las Vegas Motor Speedway. Arguably the poster child for many years on the schedule for the resulting, bland cookie-cutter racing in exciting new markets for NASCAR was Auto Club.

ACS, then known as California Speedway, produced largely boring racing that nonetheless drew near sell-out crowds until 2004, when the track lost whatever good will it had by gaining a second date on the schedule.

Combine that with it already being an era where Rockingham Speedway hosted its final NASCAR Cup race and where the famed Darlington Raceway was reduced to just one visit a year – with that that second date securing the vulnerable Labor Day weekend? That goose was cooked, and attendance fell.

NASCAR would keep banging a round peg into a square hole until 2011, when ACS lost the fall race.

Ever since, ACS has actually become one of the more exciting places on the schedule due to just how aged the pavement is. But it was really only a matter of time until a new repave would be needed, and with it would have come the uncertainty of the racing quality. And, let’s face it: this year has shown that NBC and FOX are the people with the real power in this sport, and if they want more short tracks, this is definitely a way to get them some.

What’s next for Jimmie Johnson?

Jimmie Johnson’s plans were finally revealed for 2021 and 2022, and they involve a move to Chip Ganassi Racing.

I will be soaking up the next nine weeks of my full time @NASCAR career. I’m sad to see it coming to an end but I’m excited to announce a future partnership with @CGRTeams in @IndyCar. pic.twitter.com/Y4VdVN0UP1

Johnson’s schedule will be made up of around 15 events, with the bulk of them being IndyCar street and road course events. Johnson will be open to running with CGR in both stock-car and sports car races.

It would be surprising if there is no Johnson next year in NASCAR in some form. CGR has the room to field a third car or to rent-a-charter like they did earlier in this season with Ross Chastain. The AP interview also seemed to hint that Johnson has no problems with superspeedway racing, which is either very strange (no driver likes superspeedway racing) or very truthful (everybody wants that Daytona 500 payday).

Sports cars are trickier, with CGR being MIA from IMSA now. Maybe he could drive for a Honda team, considering he’s going to be spending quite a bit of time with the manufacturer in IndyCar?

Another very curious note: no Indianapolis 500 announcement. Johnson had hinted earlier in the summer about running in that race, and it seems like now would be the time to mention it. But one hasn’t come.

The biggest winner in all of this will be IndyCar. Even if Johnson has decided not to run in the 500, the other races on the calendar just got a much-needed boost in hype and in ratings … as long as NBC can stop scheduling them head-to-head with NASCAR in the spring. That would be nice.

Who will make it into the Truck Series playoffs?

Thursday night marks the first NASCAR Gander Outdoors Truck Series stop at Richmond in many years. And after a COVID-19 schedule shakeup, the April race is now both the lone short track in the regular season and the September regular-season finale.

Twelve drivers are currently on the bubble for the final two spots. After his surprise win last season, Tyler Ankrum is on pace to point his way back into the playoffs, being 14 points above the cut-off line. Todd Gilliland is on the cusp of his first career playoff berth, 10 points ahead of rookie Derek Kraus for the final transfer spot. Of those three drivers, at least one of them will be guaranteed entry into the playoffs via points.

Raphael Lessard, Tanner Gray, Stewart Friesen, Johnny Sauter, Ty Majeski, Austin Wayne Self, Tate Fogleman, Jordan Anderson and Spencer Boyd may get into the playoffs with a win-and-in situation. If none of those drivers get into the playoffs, a second driver in the Ankrum-Gilliland-Kraus crowd will be the final driver in.

One of those drivers may already be out of luck. It was announced on Tuesday that Majeski will be replaced by 2011 Daytona 500 champion Trevor Bayne for Thursday’s race. Majeski, who has just three top-10 finishes this year, will end his long-shot campaign for the playoffs as a result of this – unless the driver can find a last-second ride for the event.

Of the drivers up there who could win and get in, keep an eye on Friesen. The No. 52 truck has had a lot of difficulties adjusting from a move to Toyota this past offseason, but another big problem he’s had to face has been the lack of short tracks. Richmond is the first true short track on this schedule, and the renowned local track driver may just complete a Hail Mary this weekend.

Good to see somebody finally come out and admit that the networks are the real power in racing today.

However I don’t see this as anything other than another bandaid on the trauma that is effecting stock car racing today. Will it impact the fact that passenger automobiles are going away with the manufacturers going almost exclusively to SUV’s in the near future, or the desire/need to go to hybrid systems? Both of those and a myraid of smaller issues will have a huge impact. But I doubt if one more fan will tune in to see another short track race.
But of course I could be wrong.

NASCAR can’t do anything right, look at what they give us, stage racing, win and your in, a two tiered points system that is so stupid, all the above has ruined the NASCAR experience, don’t know how but they will screw this up some how

Right on the money

Solution for Fontana:
Sell it to a developer.
Give Sonoma a second date and utilize the old course.
Fontana was a mistake when second Bill France hatched the idea to move Labor Day from Darlington to California. If you wanted to see the first nail in the NASCAR coffin, that was it. Had the Second Bill France not left leadership, the sport would have already died or the Smith Family would have started another sanctioning body. The second Bill France killed the sport.

I’m excited about SoCal getting a Cup short track. Selling off or developing the extra land will maybe pay for the conversion completely. This is one of the smartest things NASCAR has ever done.

Here we go again. Nascar is trying to manufacture excitement. Stage racing sucks and so do the playoffs. And why does the third stage winner win the race? If you really want to make it fair have a shootout between the three stage winners to see who wins the race. I’ve been watching Nascar since about 1965. And back then it was exciting. At the height of viewership there wasn’t any of this crap they have now. But someone decided there needed to be a change. Gee do you think it was TV. Changing the speedway to a short track it crazy. If you want to bring people to the race make the race exciting. Let the teams work on their cars and find speed. Heck, do what Michael Waltrip suggested put restrictor plates on the cars in California. And what will happen when the short track doesn’t work?????????????