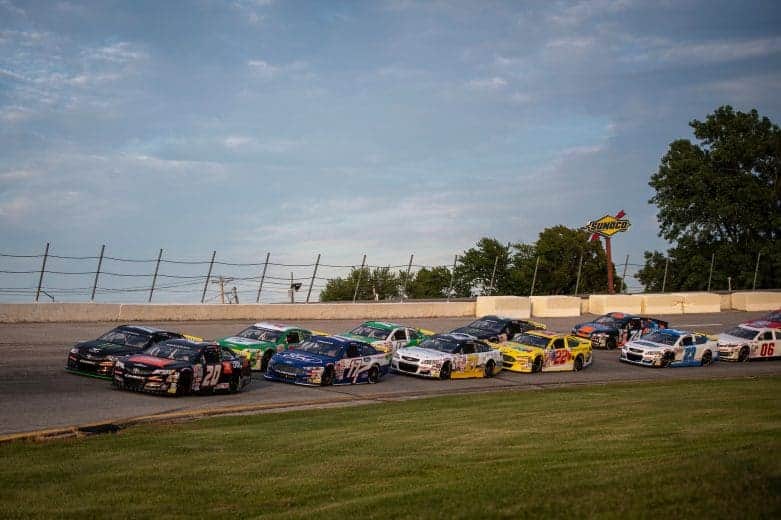 Mayer earned back-to-back victories at Toledo and also picked up the victory in the last East Series event at Dover. Gibbs also earned the victory in the last East Series race at Toledo back in June, the same East Series that has been hit severely by COVID-19. They are on just race No. 4 of the 2020 season, and Mayer holds the championship lead by 13 points. Meanwhile, Michael Self holds just a single point lead over Bret Holmes in the ARCA Menards Series.

It will be the 50th ARCA Menards Series event in the history at Toledo Speedway. Drivers like Frank Kimmel, Michael McDowell, Justin Allgaier, Chris Buescher, Todd Gilliland, Harrison Burton and others have earned victories in the previous 49 races. Of the active drivers in the ARCA Menards Series, Mayer and Smith are the only two previous Toledos winners in the field.

Venturini Motorsports’ most recent victory lane came last season with Smith, and on Saturday, it will look to earn another victory. All three Venturini drivers have experience at Toledo with Smith having the most experience and victories of the drivers. Self has three starts and a best finish of fourth, and Drew Dollar has two starts with a best finish of sixth. Self will also make his debut in the East Series.

Holmes had a solid showing last weekend at I-44 Speedway, leading 69 laps, but he came up short of that first short-track victory. He finished fourth and fifth at Toledo in the first round of races. Last weekend was the third time this season Holmes has led 60+ laps in a race. He’ll definitely be one to contend for the victory this weekend.

DGR-Crosley has been very close to its first victory of 2020 with its three drivers. Hailie Deegan threw everything out last weekend at I-44 Speedway in an effort to get the victory but came up short after making contact with Gibbs with two laps to go. Taylor Gray made his Toledo debut a few months ago, finishing a career-high third. Last weekend at I-44 Speedway, Gray matched that career-best finish.

The last time the East Series went to Toledo, Gibbs earned the victory. On Saturday he’ll look for a win in the East Series and seventh career victory in the ARCA Menards Series. In three ARCA Menards Series starts at Toledo, he has two runner-up finishes and was in the grasp of earning the victory the last race at Toledo before a wet racetrack caused him to spin while racing Mayer for the lead.

As noted above, the East Series will be running in conjunction with the ARCA Menards Series, meaning Chase Cabre, Bob Pawlowski, Mason Diaz, Parker Retzlaff, Justin S. Carroll and Nick Sanchez, will all compete for the victory representing the East.

Max McLaughlin, who is currently sixth in standings, is the only driver who has competed in all three races, not on the entry list but he is expected to enter.

Entry List for the Royal Truck & Trailer 200 at Toledo Speedway

Fans will be allowed to be in attendance this weekend after missing the initial three races. Tickets are available by clicking the link. The race will also be shown live on MAVTV and will be streamed live on NBC Gold: TrackPass starting at 5 p.m. ET.

ALL GOOD AND GETTING BETTER THANK YOU FOR YHE SHOW,BUT, WHEN POSSIBLE,AQUIRE ADDITOONAL CAMERA COVERAGE BECAUSE WHILE P1 & P2 BATTLE THERE ALSO P3 P4 P5¹,I FELT I MISSED MUCH RACING DUE TO THAT. Sorry unsubscribed at this time , but yall are good.