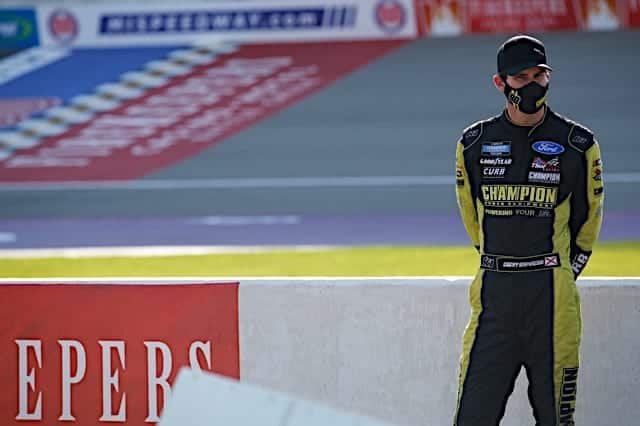 The NASCAR Gander RV & Outdoors Truck Series returned to Richmond Raceway for its first race there since 2005. The winning crew chief in that race was Jeff Hensley, atop the pit box then for Mike Skinner. Hensley ended his Thursday night (Sept. 10) in victory lane as his driver Grant Enfinger won the ToyotaCare 250.

Additionally, ThorSport Racing made Truck Series history as it became the first organization to finish 1-2-3. Matt Crafton finished second and Ben Rhodes, who won the second stage, finished third. Those three ThorSport Racing drivers all made the playoffs.

The Truck Series’ return to Richmond Raceway was the regular season finale. Ankrum and Todd Gilliland both clinched the final two playoff spots. Derek Kraus, who entered the race with a chance to make the playoffs via the point standings, finished sixth in the first stage but lacked speed in his No. 19 Toyota. He ultimately finished 23rd, four laps down.

Enfinger won his third race of this season and notched his fifth career win. He won the season opener at Daytona International Speedway and at Atlanta Motor Speedway.

“Man, definitely a special night for us,” Enfinger told Fox Sports 1 after climbing out of his No. 98 Ford. “This one’s for my buddy Jason who is laid up in the hospital for about a month and a half. Even though we got the year started out good, it’s been a rough couple of months. We catch a little flack every now and then. We had three ThorSport Racing Fords that could have won the race tonight. I’m really proud of that.”

After falling a lap down due to some damage sustained to his No. 98, Enfinger became the beneficiary of the lucky dog during the lap 175 caution flag period. Taking advantage of fresh tires, Enfinger steadily drove his way to the front, ultimately taking the lead for good from Crafton with seven to go.

“Pretty much did the same thing Ben did to me,” Enfinger said about his race-winning move. “Seemed like he [Crafton] wanted to be on the bottom but he went up to the top a little bit. We rolled the center really good and that was our advantage on the long stretch. [Hensley and I] have been up against a wall lately. We’re now going into the playoffs with some momentum. This has been a tough stretch — no sponsors or fans at the track. We’ve been working our butt off all season.”

“That’s pretty much what saved a pitiful night right there,” Ankrum told Fox Sports 1 post-race. “I was having brake issues from the start of the race. The No. 26 Chevrolet was not on point at all tonight. We got a lot of work to do. If not, we’ve got a short-lived playoff run. We’ll keep on hammering.”

As for his playoff mindset?

“Focus on winning, best way to secure your spot in the next round.”

In his first season with the first-year Front Row Motorsports Truck Series team, 20-year-old Todd Gilliland made the playoffs.

“If I was telling you before today I wasn’t nervous, I was lying,” he told Fox Sports 1 with a deep sigh of relief after the ToyotaCare 250. “I have confidence in my team. I restarted fourth on the last restart and then ended up getting lapped. This place is tough. Try to put this one behind us so we can reset. Work towards Bristol, our next race. Take it race by race. So cool to be a part of the playoffs; my first time in three years so it’s a big accomplishment.”

Furthermore, only six drivers finished on the lead lap in a race that only had four cautions. In addition to the top five finishers, Codie Rohrbaugh was the other driver to finish on the lead lap. It’s his second top 10 of this season and third top-10 finish overall.