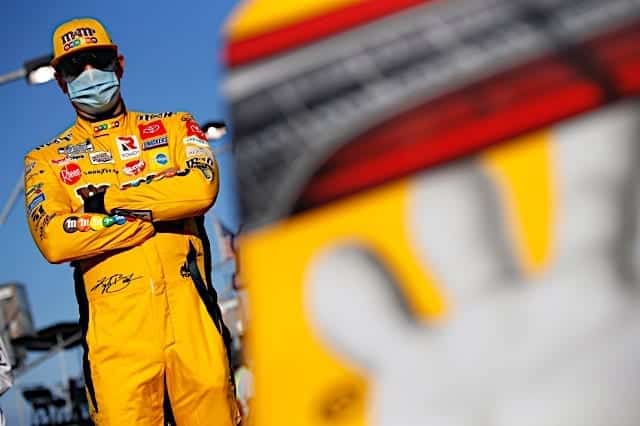 Get your NASCAR DraftKings lineups set for short-track racing under the lights! The NASCAR Cup Series travels to Richmond Raceway this weekend for the Federated Auto Parts 400 on Saturday, Sept. 12 at 7:30 p.m. ET. Television coverage is provided by NBCSN while the race can be heard on your local MRN affiliate.

This event will mark NASCAR’s second of three in the Cup Series Round of 16 to decide the season championship. Last week’s winner at Darlington Raceway, Kevin Harvick, is on the pole at the 0.75-mile track.

Richmond has fairly low banking with just 14 degrees in the corners. That means, although its length makes it a short track, the characteristics of this place are similar to flat, larger ovals like New Hampshire Motor Speedway and Phoenix Raceway. In fact, the tire setups for this race were used at those two ovals this year. Like all tracks 1.058 miles or less in length, the low-downforce, high-horsepower package is in play for this event. Drivers successful with this package in 2020 are key to your lineup, especially since it’s the first time NASCAR has visited the track this season.

This weekend also marks the second in a row all drivers will compete on an abrasive oval. That makes tire management important; you may want to take a closer look at who was successful at a similar track which eats up tires, Darlington Raceway, in last Sunday’s Southern 500.

There are slightly more laps in this event than there were last week, so drivers who lead laps and are fast are crucial to cashing your DraftKings contest(s). However, in recent races at Richmond, position differential points proved crucial; these extra bonuses can also help you win on DraftKings. It’s good to have the winner in your lineup for this race, especially if they dominate, but a well-balanced lineup can do just as much to push you up above the cash line.

Before I share my picks for this week, I’ll go over the results from Darlington.

Brad Keselowski had trouble early on in the race, as a flat tire sent him into the wall, leaving him in 31st before lap 100. Though he rebounded to 11th at the checkered flag, it wasn’t enough for this lineup. Basically, if you didn’t have Martin Truex Jr. (who scored 100 NASCAR DraftKings points), you probably didn’t cash in.

Note: The following is a sample NASCAR DraftKings lineup for Sunday’s race; you can use this information to create your own.

Like I mentioned earlier, Truex scored 100 points on DraftKings in the Cup Series’ third race at Darlington. Even though he ended up 22nd after contact with Chase Elliott in the closing laps, Truex led 196 circuits and recorded 90 fastest laps before that mishap. Anytime a driver puts up those kinds of numbers, he’ll produce a high DraftKings score for your lineup.

Prior to that poor result, Truex was on an eight-race top-five streak. He scored 44 or more fantasy points in each event, boosting rosters and bank accounts everywhere. The 2017 Cup champion has a great track record in the NASCAR playoffs and should be one to watch this week.

Truex comes to Richmond as the defending race winner, having swept both events held here last year. In six of the past seven Richmond races, he’s led over 100 laps, though he crashed in overtime in the fall 2017 event. Additionally, in that same time span, the No. 19 Joe Gibbs Racing driver notched between 10 and 88 quickest laps in each event.

Although Truex starts 14th Saturday night, he should be fast enough to make some on-track passes before the first round of pit stops. Let’s hope he doesn’t run into tough luck, short track trouble… or revenge after Darlington’s accident.

As good as Truex has been at Richmond, Kyle Busch has been better. He swept 2018’s events, even after starting 32nd in the spring. Last year, he led 101 and 202 laps, respectively, in each race while recording a grand total of 126 fastest laps. No current driver is as good as Busch is at Richmond; he has three more wins than the next-closest competitor.

Unfortunately, it’s been a rough 2020 season for Truex’s teammate. Busch is still looking for his first win, though he’s been fast in several races and his odds to win the Cup playoffs aren’t all that far out from the favorites. He had 23 fastest laps in the first race at Dover International Speedway and ended up in third place last month. However, Busch has also ended many races in the 30s after suffering an issue early (or late) in the event.

Still, Busch is too talented to keep enduring bad luck, and Richmond is a place where he can certainly turn things around. As long as the reigning Cup champion can etch out quick laps and secure a good finish, he should produce a fairly high score on DraftKings.

DiBenedetto is competing in his first NASCAR playoff after earning the final spot two weeks ago at Daytona International Speedway. Though the Wood Brothers Racing driver hasn’t totaled more than 40 DraftKings points since the beginning of August, he hasn’t had a negative score. At New Hampshire, DiBenedetto gained 13 positions to end in sixth, which boosted his DraftKings total to 52.5. Teams will run the same tire compound Saturday night that was used back then, so he may have another good score on the horizon.

Though Richmond isn’t one of his best short tracks, the No. 21 Ford wheelman did finish 16th in 2018 and 14th last fall. Additionally, DiBenedetto almost won at Bristol Motor Speedway last season before a tight race car caused him to slip to second in the closing laps. Add in a seventh earlier this year at Martinsville Speedway, another short track (though shaped differently) and hopes are high for a Cinderella story.

A win seems out of reach. But perhaps DiBenedetto can grab another much-needed top 10 this week at Richmond.

Yes, I know that Xfinity cars aren’t anything like Cup Series vehicles. But that doesn’t negate the fact Bell has dominated at Richmond before. He’s led 457 total laps in five starts and flat-out squashed the competition last fall, leading 238 of 250 laps en route to victory. Granted, that was in a Joe Gibbs Racing Toyota; Leavine Family Racing, Bell’s current team, doesn’t have the kind of funding. But DiBenedetto ran well in the same car last season on short tracks, showing they can be capable of top-10 performances.

For example, at NHMS, Bell recorded 21 fastest laps and probably had one of the best cars of the race. He was even an outside contender for a win but had a flat tire on lap 171 that sent him spinning. Bell still earned 33.5 DraftKings points in that race, even finishing in 28th.

The Cup Series rookie will begin Saturday’s race from 26th. That means he’ll have a good opportunity to race up to the front and earn position differential points for your roster. Don’t leave him hanging.

Wallace has had a busy week, as the driver announced he won’t be returning to Richard Petty Motorsports next season. It’s understandable, as the No. 43 equipment is nowhere near what he would want it to be if he wants to win. After ending the race 38th last Sunday at Darlington, Wallace will start at his lowest position since Bristol in May — all the way back in 30th place. That means he has a good opportunity to have a better result, and even a top-20 finish would be a pretty good DraftKings score. Oh, by the way, at that Bristol event? He earned a top 10 there and was 11th at Martinsville. It proves he’s a solid short track racer.

Though Wallace only had one good result at Richmond in four starts, it came last fall in the NASCAR playoffs. He moved up 25 spots to 12th place in that race, earning valuable position differential points.

Let’s hope Wallace has a similar performance this week. This low price could produce a high DraftKings score and help you win your contests.

Newman has struggled ever since returning from his horrifying crash at the end of February’s Daytona 500. However, he’s earned many top 15s and 20s, which keeps his DraftKings score in the 30s or 40s each week. One of those runs was at Martinsville in June where he ended the race in 12th place. Last week, Newman gained 16 spots to end in 15th, a respectable run at Darlington. Since Richmond is another track that tears up tires, Newman could easily reproduce that result.

Last year, the No. 6 driver for Roush Fenway Racing ended the two Richmond races in ninth and fifth, respectively; both were several positions higher than where he started. Additionally, in 2017, Newman finished seventh and third in those events. He’ll start 21st this time, and even if he gains just six spots, it would probably be enough to cash in your DraftKings contests.