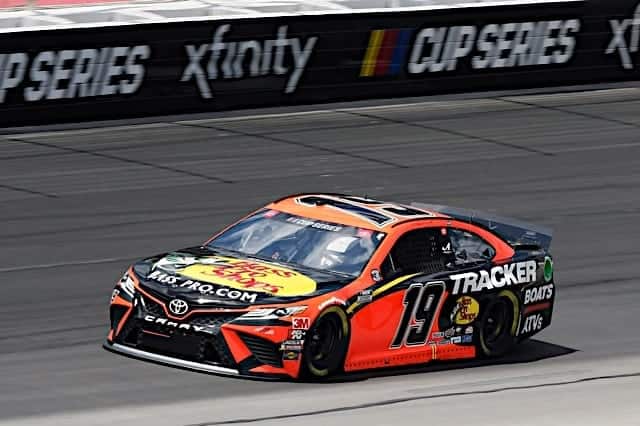 The second race of the 2020 NASCAR Cup Series playoffs is here, as the sport travels to Richmond Raceway for the third short track race of the season.

Kevin Harvick sealed his ticket to the Round of 12 last week, even though he likely would have advanced on playoff points alone. Ryan Blaney and Matt DiBenedetto are going to need to turn it around from their sub-par runs last week at Darlington Raceway, entering the race each 17 points below the cutline.

Coming into Richmond, there is only a 15-point gap from seventh to 14th in points. Unless the Big One strikes at the short track, typically only a few cars drop out of the race. So much so, that over the past 12 seasons, all drivers in the field finished the race on two occasions.

Don’t be surprised if a driver gets out front and leads a ton of laps, which is known to happen at Richmond. More often than not, at least one driver leads well over 100 laps in a given race, and as we’ve seen a handful of times over the past 15 years, even 350-plus is possible.

Also, with only 0.1 points awarded for each lap led by a driver, the need for a dominator is less important when building a winning lineup. The 400-lap race will have a total of 40 points up for grabs in this category. Take note when building your roster and focus on midpack competitors who can climb up toward the front on race day.

Here are a few drivers to keep an eye on when setting your daily NASCAR FanDuel roster for the race this Saturday.

Remember the “Big Three” concept in 2018? That’s starting to come into focus again as Truex joins the fray with Harvick and Denny Hamlin. Last weekend at The Track Too Tough to Tame, Truex was in line for another top-five finish, which would have been his ninth straight. Unfortunately for the No. 19 team, Truex was not clear of Chase Elliott, and the drivers finished 20th and 22nd, respectively.

Early in his career, Truex struggled at Richmond. He finished 40th and 41st in his first two starts in 2006. But those days are long behind him, as Truex has led at least 100 laps in six of the last seven races and swept the races in 2019, picking up his first win on a short track last spring. The No. 19 car will line up 14th.

One driver who wants to shake up the status quo is Brad Keselowski, who has quietly been finishing well since he re-signed with Team Penske for the 2021 season.

Historically, Keselowski has performed great at Richmond. In his last 12 Richmond starts, Keselowski has scored nine top-10 finishes with a worst finish of 17th in that span. Keselowski also won the fall 2014 Richmond race, leading 383 of 400 laps. If there is a time to make to noise in the No. 2 camp, Richmond would be the place.

Richmond, in recent years, is the house that Joe Gibbs Racing built. JGR has won seven of the last nine races on the three-quarters-of-a-mile track. Last year was a prime example with JGR having a clean sweep of the top four spots … until Erik Jones was disqualified.

Busch will look to continue the dominance and dethrone Truex as the best driver at Richmond. Unlike his JGR counterpart, Busch has had success at Richmond since the beginning of his career. He finished inside the top five in his first five Richmond starts, and had a sweep of the Richmond races just two years ago. If there is a track that Busch has the best shot to score his first win of the season, Richmond would be high on the list.

The 2020 Rookie of the Year is looking to prove everyone wrong and make the Round of 12. Custer is only three points below the cutline, so staying out of trouble is important for this weekend.

Back in 2018, Custer made one start at Richmond in a Rick Ware Racing entry (in Stewart-Haas Racing equipment), finishing 26th. Even though Custer is inexperienced in the Cup Series, he finished sixth in his first career Xfinity start at Richmond, and won the spring 2019 race. Custer has made strides as he has finished in the top 12 in three of the last four races, and will start in 13th on Saturday.

Nemechek will make his first NASCAR Cup Series start at the real Richmond. In the iRacing event earlier this season, Nemechek finished 11th among drivers competing in this Saturday’s race and 16th overall. Nemechek has had some quietly good runs with two top 10s this season with Front Row Motorsports .

Maybe with some luck, Nemechek can score a top 20 here, as he will start 31st.