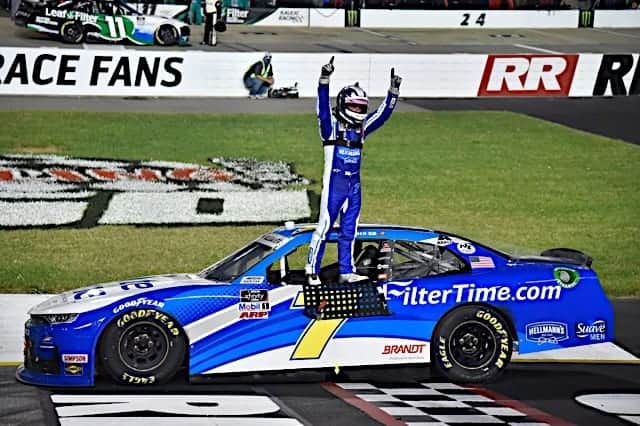 Conserving equipment was the name of the game for veteran NASCAR Xfinity Series competitor Justin Allgaier at Richmond Raceway on Friday night (Sept. 11) in the Go Bowling 250.

With long runs being the theme of the race, Allgaier took a conservative approach in the final stage as then-leader Justin Haley blew by. But as the track ate up tires and brakes, the 34-year-old methodically chipped away at Haley’s lead, finally passing his foe with 28 laps to go.

“I didn’t know when it was time to go,” Allgaier told NBCSN post-race. “(Haley) pushed the pace early on. I feel like we have let so many get away here, and we just haven’t been able to seal the deal. It’s been so frustrating, but I’m just so proud of the guys. I’m proud of the effort.”

Haley made a desperate charge when Allgaier managed heavy lap traffic, but was too far back to mount a serious charge.

“Tonight was definitely a push to the end,” Allgaier added. “We just had the luck. I say luck, but luck is opportunities and those opportunities came tonight.”

Polesitter Ross Chastain led the opening 39 laps, surviving an early lap 16 caution for a stalled Colby Howard and concurrent sprinkle, but was overtaken just before the competition caution.

However, a feverish skirmish on the ensuing restart saw an ambitious Chastain get squeezed into the fence and Myatt Snider end his day prematurely from a Joe Graf Jr. punt.

FOUR-WIDE at the front of the pack leads to trouble at the back! ?

With the mess was cleaned up, Austin Cindric used a fresh set of tires to win Stage 1, as Allgaier followed to become the victor of the second stage. However, as Stage 2 progressed, all focus was squarely on Haley, who was running laps over two-tenths of a second faster than the competition.

Since the field was spread out, Haley would have to wait until the final stage to get a taste at the front of the field. But once he did it by passing Allgaier on lap 174, it was lights out for the field… for the time being.

Behind the dominant duo was Kyle Busch, who had a surprisingly quiet night. Cindric followed in fourth while Chastain rebounded from his early contact to finish fifth.

Brett Moffitt gave the small Our Motorsports another great run with a respectable sixth-place result. With a seventh-place finish, Michael Annett successfully became the ninth driver to lock up a spot in the postseason and the second to do so on points, joining Chastain.

The second half of the Richmond Raceway doubleheader will commence Saturday, Sept. 12, as the green flag is set to fly for the Virginia is for Racing Lovers 200 at 2:00 p.m. ET. TV coverage will again be provided by NBCSN.