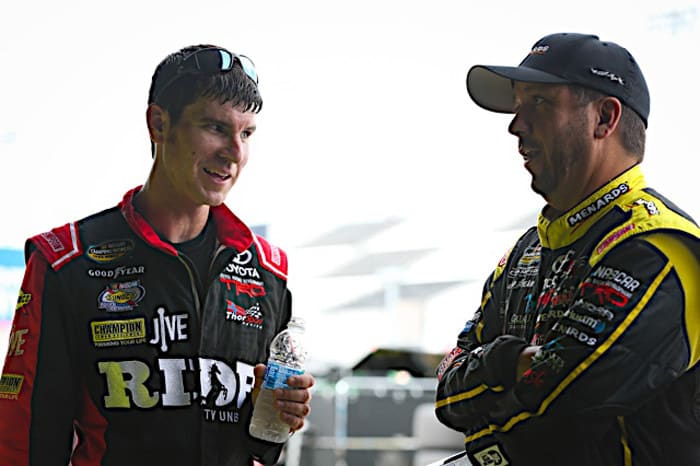 Grant Enfinger ended the regular season the exact same way he began it: in victory lane.

But through an eventful final stage in the ToyotaCare 250 at Richmond Raceway on Thursday (Sept. 10) for the eventual winner, ThorSport Racing also made Gander RV & Outdoors Truck Series history.

The organization, which has been in existence for 25 years, became the first team to finish 1-2-3 in series history, a remarkable accomplishment that Enfinger echoed.

“They’ve done so much in this sport. There’s only a couple things, or maybe one thing, that they haven’t accomplished in this sport to this point. We got three opportunities to get them an owners championship. That’s first and foremost what they deserve. But to do something they haven’t done before, that’s pretty cool. Definitely an honor.”

Runner-up Matt Crafton, who was passed by Enfinger with seven laps remaining, has been a part of ThorSport for every year of his career besides 2004. His relationship with owners Duke and Rhonda Thorson is unmatched in the garage, which makes this feat all the more sweet.

“That’s really stout,” Crafton said. “At the end of the day, that shows what Duke and Rhonda have done with this organization. They’ve built ThorSport. What we started in 1996, that’s what it’s all about.”

Ben Rhodes, who came home third, is in his fifth full-time season with the organization, and has scored all three of his victories wheeling a ThorSport machine.

“I’m really surprised it hasn’t happened yet. I guess it took long enough,” he joked. “ThorSport has became this amazing organization […] it took some time, but I think ThorSport is coming into their prime. Crafton’s got three championships and I’m hoping there’s going to be plenty more in the history of ThorSport.”

As for the race itself, Enfinger led three times for a total of 16 laps, but saw a good run potentially go out the window when contact between himself and Rhodes caused a tire rub. The No. 98 was forced to pit under green, but ultimately got the free pass and worked his way back through the field.

Contact! Between teammates!
Not good!!! ?@GrantEnfinger is forced to pit road under green in the #ToyotaCare250! pic.twitter.com/teFP9udRVH

Race winner @GrantEnfinger on pitting under green with a tire rub, but ultimately coming back from it:

"I didn't key the mic, but I was melting down inside […] I definitely thought we let that get away from us." pic.twitter.com/ycXboBa8Kx

Enfinger and company will look to continue ThorSport’s winning ways next weekend at Bristol Motor Speedway to kick off the Truck Series playoffs.