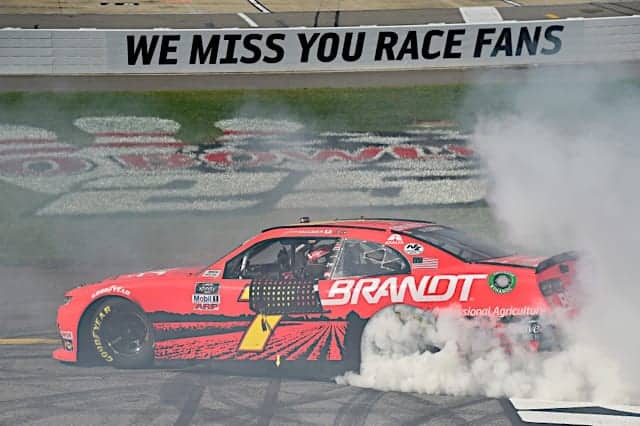 No, it wasn’t déjà vu. Justin Allgaier was just that fast.

The driver of the No. 7 Chevrolet for JR Motorsports led a race-high 135 laps en route to the victory in the Virginia is for Racing Lovers 250 at Richmond Raceway on Saturday (Sept. 12), his second win in as many days.

“Richmond has been a place that I’ve had some really good runs at,” Allgaier said. “But it seems to not come to fruition. I honestly thought today was gonna be much the same […] today I thought played out completely different. We were one set shorter on tires. And I think when the competition caution came out, we knew there was gonna be some movers and shakers, but we didn’t know how it was gonna play out.

“Proud of our guys, they built just such a fantastic race car. Our Camaros have been fast week in and week out, we just haven’t had the finishes to show for it. To be able to do that tonight was really cool.”

Allgaier was able to win stage one, his 10th such victory this season (tied for the series high) after starting 14th. The opening 75-lap frame was relatively uneventful, seeing polesitter Tommy Joe Martins slide back from first to outside the top 20 in 15 laps, and a fierce three-wide battle for the runner-up spot between Chase Briscoe, Kaz Grala and Justin Haley.

Ross Chastain was victorious in stage two, holding off Kaulig Racing teammate Haley to earn his second playoff point of the season on fresh tires. Allgaier’s crew chief, Jadon Burdett, opted to stay out under a caution with 11 laps to go in the frame, which saw the No. 7 slide back to eighth.

But upon the start of the final stage, Allgaier’s fresh rubber propelled him to the lead in almost no time. With 78 laps to go, he blew by teammate Jeb Burton for the top spot and never relinquished it. Even a late-race restart with under 15 laps to go was no match for “‘lil gator,” who earned his third win of the season.

Allgaier has won three of the last six races and nearly doubled his playoff point tally in a span of 24 hours.

He almost doubled his tally in a span of 18 hours. Not too shabby.

Despite a late crash, Riley Herbst clinched a playoff spot, as did Ryan Sieg. Heading into the regular season finale next weekend at Bristol Motor Speedway just one playoff position is up for grabs, currently held by Brandon Brown.