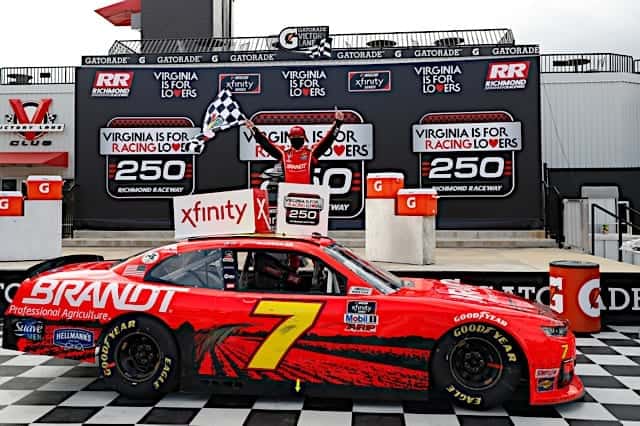 Justin Allgaier arrived at Richmond Raceway with just one win this year and zero career victories at the 0.75-mile oval.

After two races in less than 24 hours, Allgaier has two trophies and all the momentum in the world as the playoffs continued to inch closer. Allgaier swept the Go Bowling 250 and Virginia is for Racing Lovers 250 doubleheader at Richmond in the series’ lone visit to the track this year, after the spring date was postponed due to the coronavirus pandemic.

Friday (Sept. 11) night’s Go Bowling 250 ended up a battle of the Justins, with Allgaier and Justin Haley battling for much of the final green-flag run. Allgaier led for nearly 50 laps before Haley took control, but Allgaier was able to run the No. 11 back down, take the lead back and hold Haley off for the final 29 circuits. In total, the No. 7 car led 78 laps en route to the victory.

Allgaier nearly doubled his laps-led total on Saturday (Sept. 12) on his way to victory lane, leading early and often for a total of 135 laps led — more than half the race. With the win, Allgaier became just the second driver in series history to sweep a doubleheader weekend, the first being Austin Cindric at Kentucky Speedway earlier this year.

Cindric, meanwhile, finished among the top 10 in both races, clinching the regular season championship a week early. So far, Cindric has won five races and finished in the top 10 on 20 occasions.

Allgaier tops this list with his dominance, leading 213 of the two races’ 500 total laps. Issues plagued the No. 7 team all season, with six DNFs and multiple what-ifs — the biggest of those at Bristol Motor Speedway, where Allgaier and teammate Noah Gragson‘s battle for the lead ended with Allgaier in the wall — keeping the team out of victory lane.

There seemed to be a light at the end of the tunnel after the first race at Dover International Speedway three weeks ago, where Allgaier took the car to victory lane and locked himself into the playoffs. Races at Daytona International Speedway and Darlington Raceway weren’t kind, however, as Allgaier crashed out at the former and suffered mechanical issues at the latter.

With the playoffs looming, Allgaier seemed to be in a sort of momentum-less purgatory, but rose to the occasion at Richmond with the sweep.

Cindric, Gragson, Haley, Michael Annett and Ross Chastain all scored top-10 finishes in both races, but Kaz Grala was the standout of the weekend outside of Allgaier. Grala has made just four starts for Richard Childress Racing this year, but two of them came at Richmond and the No. 21 finished ninth in both races. Three of the four races have resulted in top-10 efforts for the team, and Grala managed to score points in all four of the doubleheader’s stages.

Additionally, Allgaier, Annett and Grala all finished in the same position in both races.

While Jeb Burton scored his best ever finish in Xfinity Series competition on Saturday, Friday night wasn’t so forgiving for the No. 8 driver. Burton went behind the wall with issues and could only manage a 32nd-place result, 17 laps down.

Timmy Hill, coming off a top-10 effort during Thursday (Sept. 10) night’s Gander RV & Outdoors Truck Series race at Richmond, had the worst Xfinity stint of all. On Friday night, Hill completed just four laps before suffering a vibration and taking the No. 66 behind the wall. Less than 20 hours later, he was on track for 56 circuits before a fuel pump malfunction ended his race and relegated him to last. Hill would have finished last in both events, but Chad Finchum was disqualified during post-race inspection on Friday.

The doubleheader was one to forget for championship contender Chase Briscoe, who finished 11th and 16th on Friday and Saturday, respectively. Briscoe scored points in just one stage of each race and ran up front only early on in the two events, falling back into the clutches of the field both nights.

Myatt Snider‘s playoff hopes took a shot early on Friday with a crash on lap 47, finishing 35th, and Saturday didn’t treat him much better. Snider ended up 31st, 14 laps down, and scored just eight championship points. He entered the weekend technically within reach of the 12th and final playoff spot, which Brandon Brown held with Jeremy Clements lurking within striking distance.

Snider’s dismal doubleheader concluded with a loss of 37 points. The 25-year-old was 51 points back as the series headed to the Commonwealth, but now sits 88 points back with one race left and is in a must-win situation heading to Bristol.

Underdog Performance of the Race(s)

Matt Mills tops the underdog category for the Richmond doubleheader. The Lynchburg, Va. native hadn’t finished in the top 15 all season, with just two top-20 results to his name, but ended up 13th in both Xfinity Series events. Despite not scoring any stage benefits, Mills collected 48 total championship points.

Meanwhile, Brown held onto his playoff position in the standings with finishes of 18th and 11th, and will secure the final postseason spot if no driver outside the top 12 wins at Bristol Motor Speedway. Additionally, Ryan Sieg grabbed top-15 results in both events, Brett Moffitt tied his second-best Xfinity Series result with a sixth-place effort on Friday, and Tommy Joe Martins and Jeffrey Earnhardt also added top-15 runs in the Friday and Saturday races, respectively.

Every single driver in the Xfinity Series events took on double duty, with both races starting and finishing within 24 hours of each other. Kyle Busch finished third in the first of the two events, his final Xfinity start of the season, and pulled double duty with the Saturday night Cup Series event.

A couple of drivers who ran both Xfinity races — Moffitt and Joey Gase — qualified for triple duty, with Moffitt also running the Truck Series’ return to Richmond and Gase driving for Rick Ware Racing in the Cup Series weekend finale.

“Blake Koch, we did it, buddy! We got FilterTime in victory lane!” – Justin Allgaier, Friday night

“I feel like we’ve had so many get away here, and just haven’t been able to seal the deal and it’s been so frustrating, but proud of these guys, proud of the effort tonight, pit stops were amazing … they built a fantastic Camaro.” – Justin Allgaier, Friday night

“Richmond has been a place that I’ve had some really good runs at … but it seems to not come to fruition. I honestly thought today was gonna be much the same […] today I thought played out completely different.” – Justin Allgaier, Saturday afternoon

Allgaier cemented his championship candidacy with his Richmond dominance. While most of his 2020 season has been spent in the back half of the playoff standings, even with the Dover victory, Allgaier vaulted himself into contention and now has the third-most wins this year. Allgaier has made the Championship 4 three of the last four years with JR Motorsports, and the Richmond sweep gives him quite the momentum as the playoffs approach.

2020 is also the most wins Allgaier has ever scored in an Xfinity Series season outside of 2018, so it would be prudent to keep an eye on that No. 7. He always runs well at Bristol, and could be a threat to win again this coming Friday (Sept. 18) night.

The Xfinity Series field gets a bit of a respite this coming week, as the drivers head east to Bristol for just one race. The World’s Fastest Half-Mile marks the last race before the playoffs get underway, and the field is essentially set unless a driver outside the top 12 manages to win the 300-lap race.

The Food City 300 will get underway shortly after 7 p.m. ET on Friday, Sept. 18, with coverage on NBCSN.