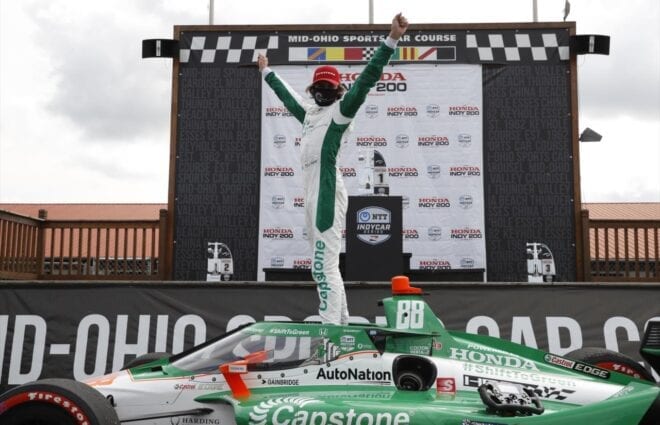 The second race of the Honda Indy 200 weekend was a far more chaotic event than the first. A rainstorm earlier in the day left damp grass lining the track, meaning that any driver to drop a tire would go for a ride into the gravel.

Despite that, Colton Herta maintained the lead from pole position. He crowned an all-Andretti podium — for the first time in 15 years — after a difficult season for a team.

“I’m so happy. We’ve been knocking on the door almost every week, and we’ve had the pace,” Herta said after the race. “For one reason or another, something has gone wrong. But we put everything together. We had an incredible car.”

It was a youthful front row, with Colton Herta and Santino Ferrucci starting side-by-side. Herta took the lead at the start, and Scott Dixon looked to pass both of the front two drivers. Ferrucci went off the track and rejoined fairly dangerously, almost clipping Dixon but knocking out Alex Palou and Felix Rosenqvist. Ferrucci was able hold onto it and stay on the track. However, he was penalized and was forced to restart from the rear of the field.

Santino Ferrucci slides through the grass — and collects Alex Palou and Felix Rosenqvist.

“I think we just have to look at the video. I did a good start. I was just keeping the position I had. Somebody went out and drove into me,” Palou said in an interview. “Disappointing because I couldn’t do anything. We’ve had such a hard season until now, with all the ovals and the learning.

Herta offered his perspective on the start after the Honda Indy 200: “[Ferrucci] was on the outside. I got halfway in front of him, so it was my corner at that point. He wanted to stick on the outside, so I had to push him off.”

The restart came on lap 4, and Herta got a clean start, slowly building up a gap to Dixon in second. Pit stops started on lap 16. The pits remained open for a moment, even as Dalton Kellett found himself beached in the gravel after losing control. Out came the second yellow of the day. Takuma Sato and Marco Andretti, who didn’t pit, took the green flag on lap 20 at the head of the field.

Ryan Hunter-Reay attempted to pass Dixon for fourth place, but Dixon desperately wanted his position. The drivers made contact, and Hunter-Reay slipped back, losing his position to Alexander Rossi. Rossi then passed Dixon with an aggressive inside pass.

Dixon spun on lap 22; he dropped a tire over the curb and touched mud, which saw him lose control. He managed to keep the car going, spinning several times and getting caught in the mud before finally getting the car on the track, albeit far back at the rear of the field.

The @IndyCar championship leader gets into the dirt and loses control. Coverage continues from @Mid_Ohio on @nbc.

Andretti lost control on lap 29, going for a ride through the grass while still avoiding the gravel as much as he could. He returned to the track just in front of Dixon, who was able to pass him just after. Sato made his tires last almost twice as long as his competition, finally pitting on lap 32. Herta retained the lead into next round of pit stops, which began on lap 46.

The latter half of the Honda Indy 200 saw things cool down, with drivers settling into a solid pace, with Dixon making the most of his push from the back to finish 10th.

Herta crossed the finish line in first place after essentially leading the race from pole position. With Rossi and Hunter-Reay rounding out the other two podium positions. After Andretti’s rough 2020 season, it was exactly the kind of boost the team needed to get back on its feet for the rest of the season. Herta becomes the seventh different winner in 2020.

“Right now, we just need to be finishing on the podium every other weekend,” Herta noted after the race, already looking forward to the next few races. “It seems we only finish on the podium when we win, and we need to fill out those other races.”

Second-place finisher Rossi sounded pleased with his finish: “I’m just so happy for Andretti Autosport. It’s been a terrible year for us, kind of globally, so to do this… huge hats off. It’s very cool for us. The championship went away from us pretty early on, so we’re just focusing on wins at this point and focusing on next year.”

In third, Hunter-Reay said, “The day was dictated by qualifying; it’s such a big deal here. Alex and I had a great start. We held station there at the end. It was nice to have a solid day with really no hiccups. The team needed it.”

Perhaps one of the biggest talking points, though, was Dixon’s mistake.

“We really struggled on the restart,” the championship leader said. “I got a little aggressive, hit the overtake, and got a little too much power, spun the tires and spun the car. It was such a stupid rookie mistake. It should have been an easy points day.

“The easiest way is to try to win race one at Indy road course. It’d be nice to go to St. Pete without having to worry about it.

After a physically difficult weekend at the Honda Indy 200, the drivers will be thankful for the upcoming break.

Elizabeth Blackstock is lead IndyCar writer for Frontstretch, a freelance journalist, and a novelist. She earned her bachelor's degree at the University of Texas at Austin and is currently pursuing a dual MFA/MA degree at Arcadia University. She is in love with her car, a 2013 Mazda 2.
@@eliz_blackstock
Previous Lewis Hamilton Wins Wreck Filled Tuscan Grand Prix
Next The Steady Rise of Williams Racing

Backmarker Blues: IndyCar Drivers Who Struggled At The Honda Indy 200