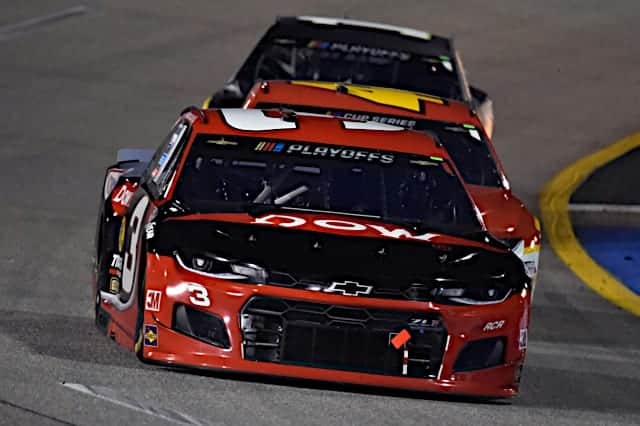 It wasn’t a win, but a fourth-place run will more than do for Austin Dillon in Saturday night’s (Sept. 12) Federated Auto Parts at Richmond Raceway.

The Southern 500 runner-up led five times for 55 laps, the most laps he’s ever led in a single NASCAR Cup Series race, and finds himself 36 points clear of the cutoff with one race remaining in the Round of 16.

“Our team has really kind of turned a corner the last couple weeks,” Dillon said. “Feel like [Richard Childress Racing] as a whole has had speed all year. Between myself, Justin [Alexander, crew chief], our engineer Billy Scott, spotter Brandon and everybody at the shop, we’ve got a really good team. We’ve shown a lot of speed this year and didn’t get some of the finishes we deserve.”

The 3️⃣ car continues to impress in the #NASCARPlayoffs. @austindillon3 (P4) reflects on a strong run Saturday night at @RichmondRaceway. pic.twitter.com/ySmsfD0Cdv

The result marks Dillon’s first time scoring back-to-back top five finishes in his Cup Series career. He pointed to his maturation process on and off the track, coupled with his age (30) as to a reason for his mental headspace being where it’s at.

“I just want to stay in the moment,” he said. “We’re in a great spot here and the more and more people start talking about you, the pressure builds. It’s nice to get interviewed every week and people starting to notice us […] just want to keep knocking down these finishes.”

This was Dillon’s first ever top five at the Virginia short track. It’s his third top 10 in his last four starts at Richmond, and a welcome rebound after finishing 22nd, four laps down the last time the Cup Series visited the venue.

He recalled completing a test a few years back, finding something that clicked with his driving style and a wonderful relationship was forged.

“Richmond used to be my least favorite track of every race track on the circuit,” he said. “I hated it. I literally hated this place. Now I circle it. Same way with Charlotte. I had bad races there, we had one test a long time ago and it helped me.”

"What a fast race car tonight for @austindillon3 and @RCRracing." – @DaleJr

And he had to overcome a pit road speeding penalty to do so. Under caution following the first stage, he was caught going a tad over the limit and was forced to restart in the rear. But once the second stage concluded, Dillon found himself back up front in second.

“In the past, I’ve been pretty solid on pit road and minimized mistakes; I don’t know why we got that one tonight,” he said of the penalty. “I’ll just have to look at it when we get back to the shop […] the good thing is to have a car like we had tonight and to be able to recover from it.”

Dillon also missed pit road during the final round of green flag stops, lost a few seconds and came back to pit road the next lap. It’s the little things that could come back to bite you, but with as fast of a car as they had tonight, it made up for the miscues.

A mistake out of the No. 3 car! ?@austindillon3 tries to hit pit road late, but he can't get slowed down in time. #NASCARPlayoffs pic.twitter.com/CIC8u1D2I1

“That car was pretty impressive tonight,” Dillon said. “Definitely could have finished second and had a shot at Brad (Keselowski), I feel like. We weren’t great on the short run, but on the long run I don’t think anyone had anything for us.”

Labeled as a sure-fire early out in the round, Dillon enjoys when people write him off, as many did to begin these playoffs. He’s still fine with that, though.

“I’ve had confidence in myself my entire career,” he said. “I’ve been through some ups and downs, kind of weathered the storm to this point. Kind of thought whenever I was given something to work with, I can perform with it and make it. The confidence from my side is there. The more opportunities you get up front, you start feeling comfortable up there and the confidence keeps growing. You expect to be up there and you drive to that caliber. There’s always another level to get to.

“There’s no time to smile right now. We’ve got work to do. It’s very hard to do what we’re doing right now in the Cup Series. I don’t take anything I’ve learned over time for granted […] I want to win races, I’ve seen a lot of guys reel off lots of wins in their careers and I want to be one of those guys who gets to that point where you’ve got 20 wins. Then you get to that point and it’s gravy, and you start smiling.”

He admitted that while running well feels good in the moment, he and the No. 3 team need to “keep on grinding and make it further” in order to achieve their ultimate goal. The next task at hand is at Bristol Motor Speedway next weekend, where he finished sixth earlier this season.

“I’m so proud of the team I have surrounded around me,” he said. “And I believe in them so much, like, when we unload, I’m not going into the race worrying if it’s going to turn going into Turn 1. That’s huge, because we have no practice, no qualifying, those guys are giving me the confidence to go out each and every week and drive the wheels off the car.

“I truthfully believe in momentum and believe in what we’ve got going on. My confidence comes from within my group.”

Why should 2 good finishes in the chase wash away an entire season of mediocre finishes during the rest of the season?
That is exactly why the playoff points are NOT a gimmick. They make it EXTREMELY difficult for a driver that didn’t have a championship-worthy season from taking the big prize. The “gimmick” is that they are giving him a chance to win the championship in the first place.

I get what you say. You have the better point of this gimmick. Well done.