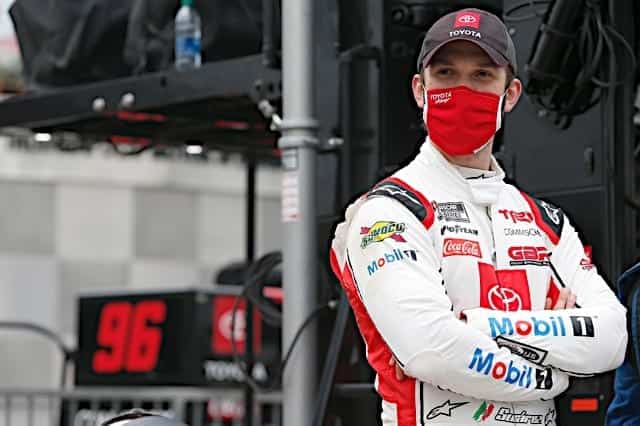 The 2020 NASCAR Cup Series season has been a tough one for Daniel Suarez.

At the end of January, Gaunt Brothers Racing announced it had signed on Suarez, 28, full-time for the 2020 season. That came two months after Stewart-Haas Racing announced it wouldn’t re-sign the driver. It was a tough pill for Suarez to swallow after finishing 17th in the championship standings in 2019. He missed out on the postseason by just four points and thought he was in position to continue with the team.

Instead, Suarez wound up a free agent and was forced to scramble late in Silly Season. So when he accepted the No. 96 ride, he knew it was going to be a challenge. After all, Gaunt Brothers Racing had never ran more than 22 races in a given year since entering the sport in 2017.

“I knew the season wasn’t going to be easy,” Suarez recently told Frontstretch. “I knew there were going to be a lot of challenges ahead of us. I was up for the challenge with the new team, with Toyota, which has always been extremely helpful when you have a lot of support from a manufacturer, like we do from Toyota.

“It’s been way more difficult than what we were expecting.”

Entering the season, GBR had three chassis in its fleet. Suarez was under the impression the team was scheduled to get some newer equipment, instead of continuously running its eight-year-old Michael Waltrip Racing cars.

But the COVID-19 pandemic put a halt to that upgrade. Instead, like many race teams, GBR spent the next few months just trying to make it out on the other side.

The team also stumbled a bit out of the gate. At the Daytona 500, Suarez failed to qualify because he wrecked out in the first Daytona Duel race. What most didn’t know then was that GBR, a single-car outfit, didn’t even have a full team assembled yet. Seven months later, the organization is still scrambling to organize and staff up.

“We’re still actually trying to get some people,” he said. “That’s been one of the struggles; there have been parts of the team that has been moving quickly and some other parts that haven’t moved as quick. There are many different areas that we were expecting something at the beginning of the year and things just moved in a different direction for the pandemic or whatever.

“It’s been a learning process. I’m extremely competitive and even though that we have older cars and stuff that’s not capable of running in the top 20, top 25, I’m able to put the cars in there. It’s frustrating to know that a top 20 is a good day.”

It’s been quite a turn of events for a driver once anointed one of the sport’s rising stars.

Less than four years ago, Suarez was hoisting the 2016 NASCAR Xfinity Series trophy at Homestead-Miami Speedway after beating out Erik Jones, Justin Allgaier and Elliott Sadler for the title. He was then hurried to Cup when Carl Edwards shockingly announced he was retiring that offseason. The Mexico native performed admirably under the circumstances, finishing 20th and 21st in points, respectively, in his first two seasons.

It wasn’t good enough for JGR, though. When Furniture Row Racing shut down following the 2018 season, Gibbs hired on 2017 Cup champion Martin Truex Jr. for the No. 19 car. Suarez was left without a ride, but not for long. He moved to SHR just a few months after the team had placed all four of its teams inside the Round of 8.

Suarez then had his most competitive Cup season to date in 2019, earning four top-five efforts and pacing the field for 166 laps. Yet once again… a team ran out of patience. By the time co-owners Gene Haas and Tony Stewart pulled the plug, choosing rookie upstart Cole Custer for 2020, Suarez had limited options.

That’s when Toyota stepped in.

“To be honest with you, the reason why I did this was because of Toyota,” Suarez said. “I have a lot of respect for those guys and everything they’ve been accomplishing and the way they work. I really like the way they operate.”

Suarez admits he had a few competitive options to go back down to NXS and chase a second title, among other choices, including a few established Cup teams.

“I did have some more options for Cup, and to be very honest with you, a couple of those options are running better than us,” he said. “The reason why is, sometimes I have just a gut feeling, and I trust my gut feeling a lot.”

So did going with his heart lead to a choice Suarez regrets?

“I really wanted to do this with Toyota and grow with them and try this new project,” he said. “I like new challenges and thought it was going to be extremely good.

When signing with GBR, Suarez labeled it a “process year.” Suffering in the short-term was expected; the hope was for long-term gain and development into a quality operation.

“Based on all the conversations we had, we knew we could have been winning races next year in 2021. That was the plan,” Suarez noted. “The plan was to build the team this year so that we would be winning races the following year. But like I said, everything changed with the pandemic. Everything changed with the [Next-Gen] car moving back and us not being able to get cars.”

Through 27 starts this season, Suarez sits 31st in the championship standings, 35 markers away from cracking the top 30, currently nailed down by Ryan Preece. The No. 96 car has an average finish of 26.1 this year, leading just 20 laps. 19 of those came in the regular season finale at Daytona International Speedway.

Having to overcome a multitude of different hurdles this season, it’s been more of a challenge than Suarez anticipated.

“I’m not used to racing like this,” he explained. “I came to this country to win and be competitive. I didn’t come here just to be in the show. I didn’t leave everything in [Mexico]; friends, family, everything, just to come here and make laps. I want to win races, that’s what I came here for. That’s been my goal. If I knew that this project wasn’t going to be to win races, I wasn’t even going to think about it. The project was made for that, to be competitive. With how Toyota operates, they do things well or they don’t do it.

“A lot of things have changed, a lot of things out of our control. We’re just hoping that things get a little bit better and see what happens.”

As all racecar drivers are, Suarez is cutthroat, especially when it comes to performing on track. With JGR and SHR, he was accustomed to battling for top-five and top-10 finishes. This year, he’s cracked the top 20 just three times.

Having to change his outlook on racing has been difficult.

“It really sucks,” he explained. “It’s not fun, because I’m an extremely competitive person and I want to win races the entire time. […] I feel like there’s a lot of good things coming for the future, we just have to keep working and be a little patient.”

Come this offseason, Suarez is a free agent. With less than two months remaining until the checkered flag waves on the 2020 season, the hope is to to set himself up well to get his NASCAR career back on track.

But nothing is solidified. Any shift would place him with a fourth Cup Series team in four years.

“There’s a lot of talks, a lot of things moving around and we don’t really know what’s going to happen,” Suarez stated. “I enjoy working with Toyota, with Marty [Gaunt, team owner], great people, great organizations. At the same time, I want to win races.

“There are a lot of parts and pieces moving around. Hopefully we can find out soon what’s going to happen, but as of right now, the main goal is to make sure that I’m going to be able to be competitive next year. The last thing I want to do is head into next year to run 25th and to feel like a top 20 is a win.”

I doubt there are any top tier teams beating a path to his door. His best scenario might be landing at RPM.

Honestly, he has had excellent opportunities in the last few years to win races and he didn’t. Not all successful Xfinity drivers can cut the mustard against the best. The grapes are sour here.

If Suarez can bring sponsorship with him and enough Toyota support for RPM to make the switch, great. RPM has made strides with Chevy this year, though. GBR is making strides, though. I’m not sure RPM in their first year as a Toyota would do much better than GBR in Year 2 with Daniel and increased Toyota support. Given how 95 is going to Spire, Germaine is for sale, and LaJoie is leaving GoFAS, GBR might move up three spots right there. Only way that 13 hangs with 96 with Daniel next year is if RCR buys the charter to field Ty Dillon directly. GBR has made huge strides this year.

For whatever my 2 cents are worth, Suarez is a good driver but you can’t win racing with the big boys just being “good”. He needs to be aggressive, he can’t win by driving in the middle or worst like he’s running from the back this year. That just does not happen. I know he takes care of the equipment and doesn’t like to make waves or ruffle other drivers feathers but if you want to win you have to go all out no matter what. RPM is not the place for him, RPM fields one car and that’s not good. He had ample opportunities his first three seasons and couldn’t win once! His best option I think is to get on with a good ride in the XFINITY and work his way back. None of the top tier teams are going to sign him, So maybe he should be grateful and stay with GBR.

Not too many Xfinity reboots work out. I wouldn’t consider Ross Chastain an Xfinity reboot, if anyone wants to cite him. I’d stay with GBR if I were Suarez, unless Hendrick or Ganassi come calling (doubt it). I think Daniel will get more respect if he can do what Corey LaJoie has done for GoFAS. I’ve been more impressed with what Suarez has done helping move GBR up to consistently compete with the 32 and 13 than anything he did with Gibbs. With the 95 being sold to Spire, maybe Toyota will even up support to 96. Toyota needs another team, but no reason to dump GBR. Support to the 66 commensurate to what the 96 has received this year would be awesome. I think GBR could be competing with RPM and FRM soon, and FRM is trending in a positive direction, too.