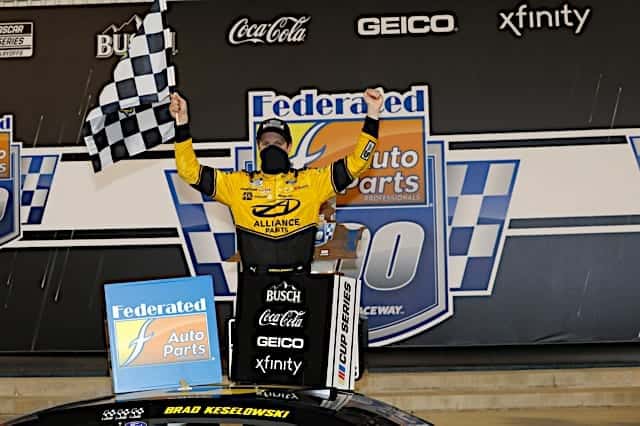 Brad Keselowski locked himself into the second round of the 2020 playoffs with a Saturday (Sept. 12) night win at Richmond Raceway, leading 192 laps en route to his fourth win of the season.

The Cup Series’ Federated Auto Parts 400 was the last of four races in three days between NASCAR’s three national touring divisions. It was also the back half of a doubleheader on Saturday, with the Xfinity Series’ Virginia is for Racing Lovers 250 concluding just a few hours prior to the green flag.

Keselowski joined Kevin Harvick in the Round of 12, and Denny Hamlin also clinched his berth despite finishing 12th.

Five different drivers led at least 40 laps throughout the evening, with Austin Dillon out in front for 55 circuits — a breakthrough night for the No. 3 driver, who nearly won last week’s race at Darlington Raceway.

Harvick earned the pole for the event and led the first 20 laps before Dillon took over to lead his first career laps at Richmond. Hamlin took advantage of a green flag pit cycle to win the opening stage. No major issues plagued the playoff contenders in stage 1, but Jimmie Johnson did scrape the wall, leading to what would be a horrendous night for the No. 48 team.

Hamlin’s stage victory and Dillon’s runner-up finish didn’t age well, though, as both sped on pit road and restarted at the back.

PENALTIES: @dennyhamlin and @austindillon3 are caught speeding on pit road.

Both drivers will restart at the rear of the field for Stage 2. pic.twitter.com/jUEZ8lpILl

Joey Logano, Keselowski and Harvick took turns in the lead, before Dillon’s No. 3 returned to the front of the pack and was out front for 36 laps.

Keselowski’s car began to come back to him and he led for his longest stretch of the night — the longest single stretch for anyone — at 76 laps, and went on to take the stage 2 victory.

His Team Penske teammate Logano made his way toward the front, but the No. 22 car’s battle with Keselowski quickly became complicated as the pair navigated lapped traffic. Keselowski ended up retaining the lead as Logano’s car began to fade.

He's back! @keselowski takes the lead away from @joeylogano with less than 90 to go at @RichmondRaceway! (?: NBCSN) pic.twitter.com/QhOUETR8Bh

Dillon missed pit road, but managed to lead a lap before Keselowski reclaimed the top spot. The lead was a position Keselowski held for the final 48 laps. Martin Truex Jr.‘s No. 19 car began to lurk in the rear-view mirrors of the leaders, and he managed to get up to second before the gap between his car and Keselowski’s stalled out.

The entire top 10 consisted of playoff drivers, with Truex, Logano, Dillon and Chase Elliott rounding out the top five.

Just 11 cars finished on the lead lap, continuing a trend throughout the quadruple-header: No more than 14 drivers completed all the laps in any event at the raceway.

The win was Keselowski’s second career win at the Virginia D-oval and first at Richmond since 2014, where he also dominated.

“I wanted to do a really cool burnout with [the car],” Keselowski said after the race. “But I want this car for Phoenix [Raceway]. It’s two for two and, man, I’m real pumped. I don’t want to look too far ahead, we’ve got to get there [and] the next round’s going to be really difficult, but still I’m really pumped about this performance and the way we ran on short tracks. Felt like coming in here … that we would run well, but man, this thing was awesome.”

The only major standings change occurred at the cutline, with William Byron‘s 21st-place finish dropping him four spots to 13th. Bowyer sits three points above in the final transfer spot, while Cole Custer, Matt DiBenedetto and Ryan Blaney remain in serious danger of elimination.

The Cup Series next heads to Bristol Motor Speedway for the final race of the playoffs’ opening round. Keselowski won the first event there this season, while Elliott scored the victory in the All-Star Race in mid-July. Coverage begins at 7:30 p.m. ET on Saturday, Sept. 19.