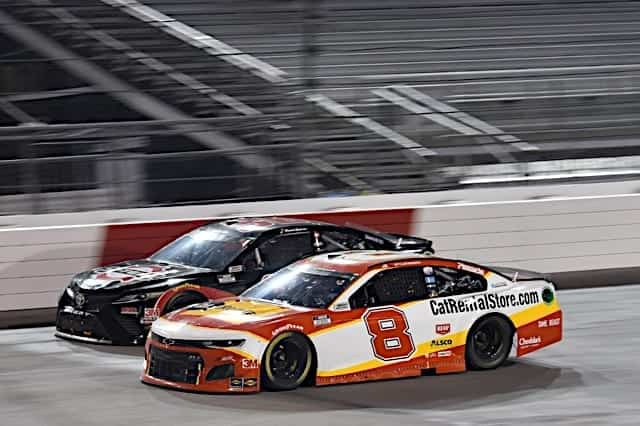 Who… should you be talking about after the Federated Auto Parts 400?

Brad Keselowski predicted earlier in the week that he would win at Richmond Raceway. The 2012 Cup Series champion made good on his word Saturday night (Sept. 12). Keselowski led four times for a total of 192 laps in the Federated Auto Parts 400. His No. 2 car came to him on long green-flag runs, and that’s just what the race provided in a virtually caution-free event. Twice, Keselowski was able to run down and pass both teammate Joey Logano and Austin Dillon, who led a career-high 55 laps. He also utilized lapped traffic to his advantage to make the winning move over Dillon. It’s Keselowski’s fourth win of 2020, the first time since 2016 he’s reached that mark, and locks him into the next round of the playoffs. Bristol Motor Speedway, another short track, looms on the horizon for Team Penske’s veteran leader to add to his victory total.

It’s Reddick, though who has been consistently strong throughout the season, boosting performance at the No. 8 Chevrolet vacated by Daniel Hemric. While people are asking what’s behind teammate Dillon’s surge, the biggest change at Richard Childress Racing this year was adding Reddick. That’s probably not a coincidence, as the two-time Xfinity Series champion has simply made this organization better.

What… was the hidden gem from the weekend?

Let’s back this one up to the last couple of weekends, actually. The NASCAR Gander RV & Outdoors Truck Series returned to both Darlington Raceway and Richmond after many years away from both tracks. Seeing the pickups back at two unique NASCAR ovals was a great thing for that division. The Trucks were conceived to run on smaller tracks and they put on a great show at both. The series has evolved to include several companion events with Cup but more of these pairings can only improve their schedule.

If the series is going to run companion events, it makes sense to run them at the best tracks for pure racing. NASCAR should cut a couple of the mile-and-a-halves from the Truck schedule after seeing how their final two regular season races transpired. Both Ben Rhodes’ overtime victory last week and Grant Enfinger’s late-race pass Thursday night are the type of phenomenal finishes this division is known for.

Either way, it was great to see them back, letting a new generation of drivers learn the ropes and look strong doing it.

Polesitter Kevin Harvick certainly didn’t have a bad night, at least not by anyone else’s standards. Harvick led 41 laps and finished a solid seventh, his series-high 23rd top 10 of 2020. With eight wins on the year, the finish might not have been up to Harvick’s own standards, but he’s in good shape for a deep playoff run so far.

The most recent Richmond winner Martin Truex Jr. hasn’t won since Martinsville Speedway in June. However, he’s been nothing if not consistent this year.  In the last 10 races, Truex has finished in the top four nine times, and a second-place finish at Richmond was his third runner-up result in the last five races.

Rookie of the Year Cole Custer had his moments Saturday night, knocking on the door of a top-10 finish with a solid 14th. He didn’t score any stage points, though, and that just might prove costly in his bid to advance in the playoffs.

Active Richmond win leader Kyle Busch led just four laps on Saturday night and finished sixth, but it was hardly a terrible race. Busch had to start at the back of the field after the No. 18 failed pre-race inspection twice and he was without crew chief Adam Stevens, who was suspended for a penalty following last week’s race at Darlington. Considering what was overcome, the finish was a good one and exactly what Busch needed.

When… was the moment of truth in the Federated Auto Parts 400?

There were exactly zero unscheduled cautions on Saturday night.  That’s right; a short track race happened where everyone behaved so well there wasn’t one single spin, blown tire with debris or fluid spill.

A lot of that can be attributed to the postseason. Nobody wants to be the guy who ended a playoff driver’s chances, and those 16 drivers are on their own agendas, saving equipment when a bad finish can mean elimination.

But did the lack of incidents make it a bad race? Not at all. There were comers and goers, different strategies that we might not have seen if there had been a rash of cautions. Drivers were running down and passing each other up front, tire falloff causing variation in lap times. Yet some viewers on social media were calling for cautions, even the dreaded invisible debris.

That makes no sense. Races should play out organically and this one did.

Saturday night is elimination day at Bristol Motor Speedway. While only three drivers – Harvick and Keselowski on wins and Denny Hamlin on points – are locked into the next round, can anyone else be counted in or out?

Realistically, Logano, Truex, Dillon along with Chase Elliott and Alex Bowman should move on provided they avoid complete disaster at Bristol and that’s not always easy to do. Ninth-place Kyle Busch has an 18-point cushion as well. While that margin is hard to make up, it’s not as hard to lose. But Busch is the best of this field at Bristol, and even a mediocre night should be enough.

Behind Busch, it’s not so easy to call. Kurt Busch and Aric Almirola have just seven points to lose; Clint Bowyer has only three. They don’t need a bad finish to lose their spot; someone else just needs a better one.

Below the cutline, Ryan Blaney is in real trouble. At 16th in points and 27 behind Bowyer, he’ll need a win to advance. But while Blaney hasn’t struggled as much at Bristol as he has at Richmond, he hasn’t set the world on fire with a 20.7 average finish.

Matt DiBenedetto also needs a win, and he’s at his best at Bristol, where he finished second after dominating much of the race last year. The Wood Brothers Racing No. 21 team has a fighting chance.

The other two drivers sweating it out are in better shape. William Byron is just three points outside the top 12 and Custer only has eight to make up. A stumble by Bowyer, Almirola, Kurt or even Kyle Busch coupled with a strong run could put either driver through.

How… likely is a win from a non-contender in the next eight weeks?

Not very, although Reddick or Jimmie Johnson might make a liar of me. Actually, with Talladega Superspeedway on the schedule, so could a bunch of others, but Reddick and Johnson are the most realistic. Reddick has NASCAR national series wins at Talladega and Las Vegas Motor Speedway, past history that should help this fall. Ideally, he’d put up some more top-five runs before being considered a real threat, yet I find him hard to bet against.

For Johnson, the last eight tracks of his Cup career are littered with success. He has won at least twice at all except the Charlotte ROVAL for a total of 31 victories. His best bet is Martinsville Speedway, where he’s won nine times. As tough as the last couple of years have been, counting Johnson out completely isn’t something anyone should do.

Agree that I wouldn’t want a questionable debris caution just to have a caution, but disagree that having no cautions is a good thing *especially at a short track). To me it points to “chase neutered” competition. No one wants to mix it up and push the limits because they are afraid of impacting the precious playoffs. That is a loss for fans that want to see a real race and not 40 guys riding around for 3 hours playing nice. Let’s see how chase neutered Bristol is next week.

It seems to me that cautions have been WAY down this year, well before the Playoffs started. I wouldn’t put it all down to what you call “chase neutered” competition. I’d like to see some real, factual analysis as to why we are seeing so many wreck-free races this year.

While this year is one big asterisk due to Covid, many have noticed how non-contenders yield to championship contenders once the playoffs/chase start. When most of the field is trying to stay out of the way it should result in fewer wrecks.

As for this year there are a lot of things that are different. The only analysis that could be done is to actually PROVE that there have been fewer legitimate cautions by the numbers but that wouldn’t explain why. No practice might make drivers more cautious during the early part of the race as they try to dial their car in which would result in fewer wrecks.

The fact that there is no qualifying means the cream is already on the top and doesn’t have to rise to it by passing a bunch of slower cars (and vice versa) which creates less opportunity for wrecks. The cars start lined up pretty much based on points each week.

Double header races have necessitated that drivers try to take care of their car in the first race so they can use it again in the second race. That would definitely result in fewer cautions.

I’m not sure if there is a place where that data can be easily retrieved (especially the part about legitimate cautions).