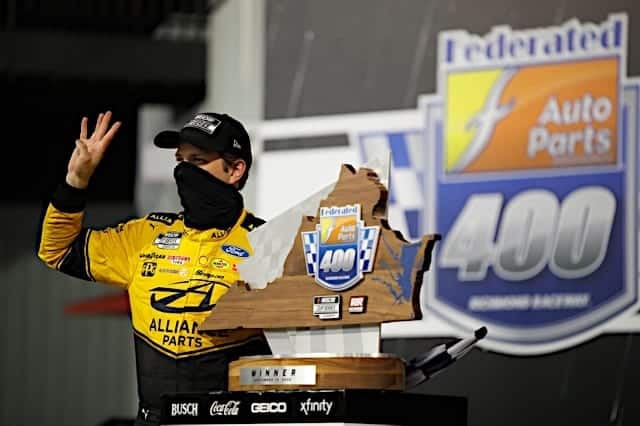 Kevin Harvick raced out to the lead on the initial start and led the first 20 laps before Dillon came up and passed him. The No. 3 looked fast early and often, a continuation of his second-place finish at Darlington last week. Early on, it was clear that Dillon had one of the cars to beat.

After a competition caution at lap 30, Dillon maintained the lead for only one lap before Denny Hamlin got around him. Dillon fell to third, but eventually worked his way back up to second and challenged for the lead late before finishing the stage behind Hamlin. There was also a fierce battle deeper in the top 10 between Truex, Elliott, Clint Bowyer and Ricky Stenhouse Jr.

Hamlin and Dillon were among the leaders off pit road after the stage break, but both were nabbed for speeding. As a result, Logano and Keselowski took the point and didn’t look back. Logano led for 36 laps until Keselowski decided it was his turn.

What a battle between teammates at @RichmondRaceway! @keselowski wrestles the lead away from @joeylogano in Stage 2! (📺: NBCSN) pic.twitter.com/mtFx55hSSN

With the second stage being significantly longer than the first, strategy came into play. Harvick and crew chief Rodney Childers implemented a two-stop strategy while the rest of the leaders were intent on making just one stop. The strategy appeared to be working for the No. 4, and he would’ve likely won the stage if he didn’t suffer a commitment line violation on his second green flag stop. Still, he rallied on the newer tires amid the penalty and got his lap back, and even earned a stage point.

Brad Keselowski wins Stage 2 and picks up his 30th playoff point. And ANOTHER nine stage points for Dillon in P2.

On what would be the final restart of the night, Keselowski, Logano and Truex pulled away. Similar to last week at Darlington, the final stage had some debate about whether to pit once or twice. Unlike last week, all teams — besides the Chip Ganassi Racing duo — opted for two stops.

The two-stop strategy blew the one-stop strategy away, as Keselowski vaulted to the lead with 48 laps to go and never looked back. It was a dominant performance for the Michigan native in a car that he’s becoming very accustomed to.

Marty Snider reports from pit road that Jeremy Bullins plans on bringing this car to Phoenix for Brad Keselowski (should they make it). Brad said earlier this week “I think the team told me we are bringing my Loudon car” for tonight’s race | #NASCAR

The win was Keselowski’s fourth of the season and 34th of his career.

The winning car was clearly better, but Keselowski and Logano showed that they are still among the title favorites. In the 750 horsepower races held at Phoenix Raceway, New Hampshire Motor Speedway and Richmond this season, the duo have three wins combined and five of a possible six top fives. They are definitely a pair to look at should they make it to Phoenix for the championship.

As for Keselowski, he’s having the best statistical season of his career. His average finish of 9.4 is a career-best, and his four wins are his best since 2016. The Penske crew chief swap seemed like it would hurt the No. 2 Ford the most, but it turned out to be the opposite. He’s been the best and most consistent of the bunch, and is lining himself up for a potential second championship.

We came here to win and this team got it done! I’m so pumped about our performance tonight…Wins like tonight really show the strength of our #2crew. Excited to keep this going! pic.twitter.com/jHXhh7f8eh

There has been no greater shock in the first two playoff races than Dillon and the No. 3 team. He was second at Darlington and fourth at Richmond, which meant he earned consecutive top fives for the first time in his Cup career. Dillon is driving better than ever, and his cars are definitely better as well.

"I feel like I gave one away" @austindillon3 tells his team over the radio.

It's the first time Dillon has scored consecutive top-five finishes in his Cup career.

The No. 3 team heads to Bristol Motor Speedway comfortably above the cutoff (+36). Barring disaster, he’ll be moving on to the Round of 12 for the second time in his career (2016). How far he can go after that is unclear, but it’s tough to count this team out after seeing how much they stepped up so far. It’s still a stretch to believe they’re a threat to make the title race with so few playoff points, but crazier things have happened.

After getting tangled up for the win at Darlington Raceway, Truex and Elliot had the quiet, workmanlike days that they needed. They both sit relatively safe above the bubble as they head to another short track. Truex, at one of his best tracks in Richmond, finished second yet again. It’s his ninth top five in the last 10 races this season, with the 10th seeing him crash out battling for the lead late. Though he still only has one win, there are few teams rolling like the No. 19 right now.

Missed it a little bit tonight, but @james_small and our guys did a great job with adjustments and on pit road to get us a solid finish. 👍🏻 @BassProShops #TeamToyota pic.twitter.com/dibyJp00fn

Elliott, at what he described as one of his worst tracks, was thrilled to come home fifth. He finished right around where he ran all night, and that’s just the day that he needed. There was nothing spectacular, but he didn’t need to hit a home run in the first round. He should be fine heading into Bristol, where he won the All-Star Race and nearly won the spring race.

While one half of the Penske camp rolled through Richmond, the other half hardly showed up. Ryan Blaney and Matt DiBenedetto are in serious trouble after another puzzling night. Blaney, whose 19th-place finish was actually the third-best of his career at Richmond, played from behind all night again. He pitted twice for a loose lug nut early and couldn’t get back through the field.

DiBenedetto entered the playoffs with the fewest playoff points, but I don’t think he was expected to be this off. He hasn’t finished in the top 10 in the last six races, and has been a non-factor since some great early-season runs.

It’s just strange to see these two struggle so mightily as their teammates run up front. Both drivers are essentially facing must-win situations at Bristol.

Not many drivers were hotter than William Byron entering Richmond, but all that changed on Saturday night. Three straight top fives heading into the weekend probably had the team feeling great. Richmond admittedly isn’t Hendrick Motorsports’ best track, and it showed with how off Byron was. He showed some speed early with his teammates Elliott and Alex Bowman, it just didn’t sustain throughout the night.

Now, he enters Bristol below the cutoff and being forced to make up points and positions. He finished eighth there in the spring. That might get the job done if he can secure some stage points. It’ll definitely be close for Byron and the No. 24.

Two playoff races, two uncharacteristic results for Hamlin. It might not matter, because he clinched a spot in the Round of 12 based on points. Hamlin claimed after the race that the surface at Richmond doesn’t match Phoenix, so it shouldn’t be a problem at the title race. Still, it’s concerning to see that performance on a short track.

He won the first stage before a speeding penalty sent him to the back. After that, he just couldn’t recover, similar to last weekend at Darlington when getting back in the pack. The car wasn’t strong enough, like the No. 3 was, to run through the field. They could be saving something. Who knows? It’s not a major concern right now, it’s just something to consider moving forward.

Richmond — being a short track with flat corners – was the last best chance to give us an idea of who could be the favorite at the championship race in Phoenix. After his Richmond performance, it might be fair to put Keselowski as the favorite for Phoenix, if he can make it. He doesn’t have the playoff points that Harvick and Hamlin do, so it isn’t as much of a sure thing.

Let’s look at Keselowski’s 750 horsepower track results this year, though:

If I’m a competitor, I’m looking at Keselowski as my biggest challenger outside of Harvick.

Stage 1 was 80 laps while stage 2 was 155 laps. The difference between those two made for odd strategies and more entertainment in a race that lacked any on-track incidents. At certain tracks where there are often less cautions, this could be something NASCAR tries to try and make strategy more important.

Bristol is going to be a wild cutoff race. OK, so tonight might not have proved that, but the way the points shook out, it’s sure to be fun. Saturday felt like the calm before the storm. It was very, very calm, so hopefully that means the storm will be that much crazier.

With the cutline so close and drivers willing to do whatever it takes, it should be quite the show. In the spring race, Elliott and Logano wrecked for the lead late. If that happens again, does someone who seemed safe end up getting eliminated early? Does someone unexpected sneak in for the win? I can’t wait to find out.

Most drivers returned to their standard schemes after a fun throwback weekend in Darlington. One car that stood out, though, was Erik Jones’ No. 20 Irwin Tools Toyota.

These days, Jones’ sponsor, Stanley Black & Decker, predominantly features DeWalt and Stanley Tools. The Irwin colors are always a fun change, and it has the throwback feel to Kurt Busch’s days in the No. 97.

As has been the case all season, the new 750 hp short track package delivered an improved race compared to 2019.

Last year, Truex won the Richmond playoff race after a dominant performance from him and Kyle Busch. The two combined to lead 311 of the 400 laps, with Keselowski leading the other 89. That’s right, only three drivers led that race and there were only six lead changes (three of which happened on pit road).

Austin Dillon puts the bumper to Joey Logano as they race for second.

Saturday’s race wasn’t a thriller, and it wasn’t particularly exciting at the end. Still, the racing was better, there were more passes for the lead and the differing strategies made for some excitement in the middle portion of the race. Overall, Richmond just isn’t an outstanding track, and this is about what you can expect when you visit.

Like last week, Keselowski’s win doesn’t move the cutoff line. Harvick and Keselowski are clinched due to their wins, and Hamlin joins them in the Round of 12 based on points. Outside of them, Logano, Truex and Dillon (!) are the three safest drivers.

Just 15 points separate 10th-place Aric Almirola from 14th-place Cole Custer, so it’s sure to be tight all evening at Bristol.

Only one race remains in the Round of 16. #NASCARPlayoffs pic.twitter.com/P92x04cXza

The Cup Series returns to Tennessee for the third race of the season (including the All-Star Race) at Bristol Motor Speedway. The prestigious Bass Pro Shops Night Race is set for Saturday (Sept. 19) at 7:30 p.m. This will be the third and final race in the Round of 16 — the last chance for drivers to secure their spot in the Round of 12.