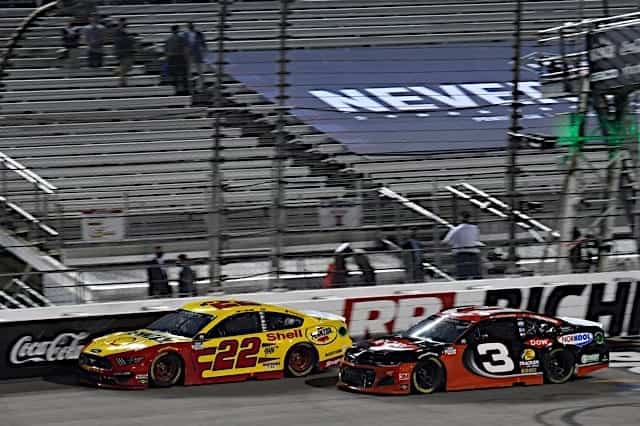 For the first time in his NASCAR Cup Series career, Austin Dillon has scored back-to-back top-five finishes.  Last week at Darlington Raceway, Dillon pulled off a surprising second-place result.  He followed that performance up with an even stronger run at Richmond Raceway Saturday night (Sept. 12).  Although Dillon finished fourth, he led 55 laps and appeared to have the fastest car on track at certain points of the event.  With one race to go in the first round of the playoffs, Dillon finds himself sixth in points, 36 above the cutline. Moving on to the Round of 12 is a near certainty.

It’s still early, but Dillon looks like the biggest positive surprise of the NASCAR playoffs so far. Although 2020 is the fourth time he has participated in the postseason, Dillon’s stats this year did not suggest he stood a good chance of making a deep playoff run.  The No. 3 team spent most of the regular season near the playoff bubble until arriving at Texas Motor Speedway in July.  Some clever pit strategy there got Dillon out front, where a few solid late-race restarts earned him his third career win on old tires.

But the rest of the regular season did not go as well.  Dillon missed a race due to a positive COVID-19 test and finished no better than eighth in the other seven events.  If not for the win at Texas, Jimmie Johnson, not Dillon, would have qualified for the 16-driver postseason. Richard Childress Racing’s veteran driver looked destined for a first-round exit after missing the playoffs altogether in 2019.

Instead, the No. 3 team has newfound momentum and is knocking on the door of the Round of 12.  Dillon is not a mathematical lock to advance next weekend, but it would take a very bad performance at Bristol Motor Speedway to knock him out of championship contention.  In all likelihood, Dillon will advance on the strength of his last two races, no matter what happens under the lights in Thunder Valley.

The real question now is, how far can the No. 3 team go into the postseason?  Are Dillon and RCR destined to fizzle out? Or are they about to become massive playoff spoilers?

In the history of NASCAR’s elimination-style playoff format, there have not been many instances of true underdogs advancing to the championship round.  Ryan Newman in 2014 was probably the biggest surprise, nearly winning the title without a single race victory.  One year later, Jeff Gordon competed for the championship in his final full-time season.  Gordon is one of NASCAR’s all-time greats, but he had to fight through an up-and-down year filled with poor luck.  The four-time series champion did not lock up a postseason spot until the final weeks of the regular season, going winless until a memorable Martinsville Speedway race that October launched his upset bid.

The introduction of playoff points in 2017 made things more difficult for drivers in Dillon’s position.  Instead of the 12 remaining contenders starting on equal footing in the next round, playoff points roll over with the drivers who have earned them, mimicking the points separation from the beginning of the playoffs.  In Dillon’s case, he began the postseason with five playoff points, all from his Texas win.  In the initial field of 16, that put him in a three-way tie for 10th place, just one point above the cutline.  Dillon had to build up a points cushion over the past two races to find himself in a much more comfortable position going to Bristol.  It is likely that one or two drivers who had a better regular season than he did will not be able to advance.

Yet even if Dillon does survive the Round of 16, all of his hard work gets erased.  Unless he wins stages or the race itself, he will still take exactly five playoff points into the Round of 12.  Where he winds up relative to the cutline will depend on who does get eliminated, but he will probably be somewhere right around the bubble once again.  Advancing any deeper into the playoffs will require the No. 3 team to either win or keep cranking out top-five performances, hoping Dillon can scrounge together enough points to stay in the game.  For a driver who has never earned more than four top fives in one season, that’s a difficult mountain to climb.

This year’s Round of 12 includes races at Las Vegas Motor Speedway, Talladega Superspeedway and the Charlotte Motor Speedway ROVAL.  In 10 starts at Las Vegas, Dillon has two top fives, including one earlier this season.  If he keeps his momentum up through Bristol, it is possible that hot streak could extend to LVMS.

However, Talladega and the ROVAL are going to be major wild card races.  Since Dillon does not have a lot of playoff points to fall back on, his postseason fate will hinge largely on those two events.  Both of his races at the ROVAL resulted in finishes outside the top 20.  Talladega has been a mixed bag for Dillon, with one top five and three top 10s in 14 starts.  Neither track is a place where he can count on a good result.

Dillon has reached the Round of 12 once before, during his first playoff appearance in 2016.  Dillon’s advancement that season was also a surprise, and he even did it without any top fives in the first round of the playoffs.  But when a crash at Charlotte (on the oval layout) left him with a 32nd-place result, Dillon had to rally to keep his postseason hopes alive.  He went on to score a sixth place at Kansas Speedway paired with a ninth at Talladega.  Despite the solid comeback, it wasn’t enough.  Dillon wound up tying with Denny Hamlin for the final transfer spot but Hamlin got the nod on a tiebreaker.  The No. 3 team’s upset championship bid came to a screeching halt.

Dillon is likely one week away from returning to the Round of 12 for the first time in four years.  He and the No. 3 team should be commended for avoiding the first round elimination that most people expected for them.  But if Dillon is going to advance any further, he will have to make up his playoff point deficit again.  That would require a level of week-to-week speed he has never before demonstrated in a seven-year Cup career.

Until Dillon proves he can run with the leaders for more than two to three weeks at a time, he cannot be considered a championship threat.  This postseason run is much more likely to resemble Ricky Stenhouse Jr.’s in 2017 or William Byron’s last year – a surprise advancement out of the first round but not enough speed or points to hang with the true contenders.