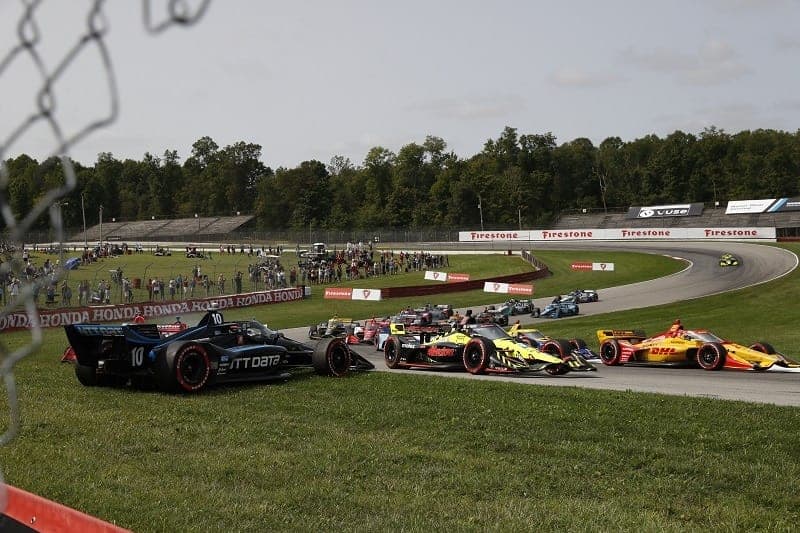 The 2020 Honda Indy 200 at Mid-Ohio almost didn’t get onto the NTT IndyCar Series schedule, but the weekend (Sept. 12-13) delivered two more races in an already packed season.

Two drivers got their first wins of the year at Mid-Ohio Sports Car Course, with Team Penske’s Will Power breaking into the win column with a relatively unopposed performance in Saturday’s Race 1. Then in Sunday’s Race 2, it was Colton Herta who had the same path to victory, also starting from the pole to take the checkered flag.

But while the racing may not have been breathtaking, there were still a few moments throughout those 48 hours (such as Marco Andretti giving the lawn a nice mowing) that gave IndyCar fans something to talk about while the league heads into a well-deserved break.

IndyCar fans and critics alike have been vocal about the pit stop issues that have factored into a number of races this season, but at Mid-Ohio it was driver errors that screwed things up. While the pit crews weren’t flawless, they got off pretty easy compared to what was happening on track.

In no particular order, there was Andretti’s detour onto the lawn (you have to love his upbeat “No problem!” on the radio afterward too), Scott Dixon shockingly making a completely unassisted spin that ruined his chance at another Mid-Ohio win, Power taking a skid in the second day’s qualifying, and Santino Ferrucci both driving off track and trying to push himself back on in the most inconvenient place possible.

Graham Rahal said after Race 1 that some of his colleagues would “fall off the saddle” doing yet another doubleheader, and he wasn’t wrong. It’s a good thing everyone’s getting a break after the 2020 Honda Indy 200 because they deserve and need it.

2) Points racing is alive and well

Let’s be honest: neither of these races were that exciting. The pole sitter lead the majority of both events without any serious on-track challenge for the top spot, and went on to win. Instead, the NBCSN broadcasting team turned fans’ focus to the IndyCar championship points, particularly after Dixon’s spin in Race 2.

Even though he had a ridiculous weekend, the Chip Ganassi Racing driver deserves credit for still managing to finish 10th in both races when he could have ended up much worse. And while his nearest rival Josef Newgarden had more success, you could hear his frustration on Sunday as he was stuck driving around in a Team Penske train, unable to really go anywhere and make the most of the door Dixon had opened for him.

Points racing is not anyone’s favorite way to race, but the 2020 Honda Indy 200 proved that there are some days where all you can do is make lemonade out of lemons.

3) The Andretti luck is finally starting to turn

Regardless of who your favorite IndyCar team is, was there anybody that wasn’t happy to see Andretti Autosport have a great weekend? The team has struggled mightily throughout the 2020 IndyCar season and things went very right for them at Mid-Ohio.

The Andretti roster went from having one podium between five cars in the first ten races to sweeping all three podium spots on Sunday, and Alexander Rossi picked up an additional podium on Saturday. Particularly for Rossi, who seemed to be cursed by some kind of IndyCar gods, it had to feel amazing. It also provides some hope that the weight has lifted off the team’s shoulders and they can be more competitive to wind down the season.

It’s been a Penske vs. Ganassi rivalry all season, but it would be fantastic to see some of the Andretti drivers get in there and mix things up in October.

I didn’t think you could purposely force another race car off the track. Colton Herta admitted that’s what he did to Santino Ferrucci.