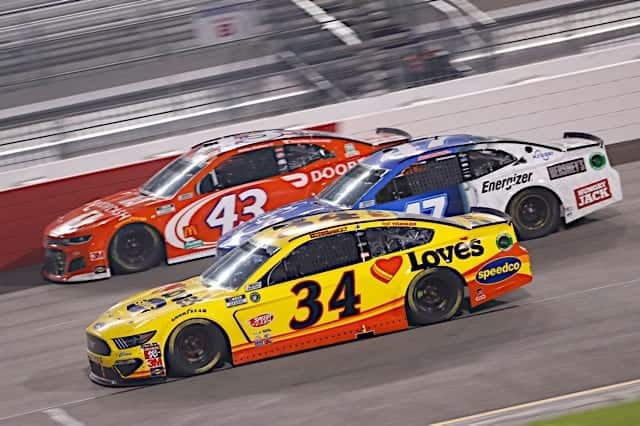 When covering underdog teams, there’s always a distinct possibility that looms over each and every race. That possibility is the potential for every Cinderella at the ball to wind up with a broken glass slipper. Or perhaps more appropriate, the ugly, well-funded stepsisters might steal all of the glass slippers. Such was the case this weekend during the Cup Series race at Richmond Raceway.

Michael McDowell was indeed the top finishing underdog … in 25th. Yes, only one of the unsung heroes managed to start and finish in the top 25. With only 37 cars in the race, such an achievement isn’t even worthy of being termed “an achievement.” At least part of this can be blamed on the lack of trouble that the typical frontrunners experienced. But even the mid-range teams like Roush Fenway Racing, JTG Daugherty Racing and Leavine Family Racing all steered clear of both mechanical problems and crash damage.

So McDowell got to stand atop our proverbial podium at the end of the Federated Auto Parts 400 with his paltry 25th-place finish. The No. 34 Ford actually started 20th but simply couldn’t keep up with the pace set by the leaders.

After the race, McDowell talked about the struggle being enhanced by the lack of cautions.

“Well that was a long night at Richmond. We fired off pretty good on the first run and I felt like we were going to have something, but I’m not exactly sure what happened on the second run; we just got really loose and lost a lot of track position for a while before finally getting it back. Without a lot of cautions, there weren’t many opportunities to get bunched back up. It wasn’t the run that we wanted for our No. 34 Love’s Travel Stops/Speedco Ford Mustang, but we stayed close to the guys that we’re racing with in the points and we’ll keep fighting; head to Bristol and try to get a better run in there. Everybody did a good job and worked really hard, we just didn’t quite have it tonight.”

No one. As previously mentioned, the lack of contenders falling by the wayside didn’t leave much room for underdogs to luck into a good finish. None of them were able to crack the top 20 at the checkered flag. Or the top 25 for that matter. Oh well. At least Bristol is next. Avoiding trouble there is like falling off a boat and trying to avoid water.

The NASCAR Xfinity Series got a double dose of Richmond as they raced on both Friday night and Saturday afternoon. Round one on Friday saw former truck champ Brett Moffitt end the evening in the sixth position. Also earning stellar results were Ryan Sieg in 12th, Matt Mills 13th and Tommy Joe Martins in 15th.

The second Xfinity Series show began with Martins on the pole courtesy of his 15th-place finish on Friday and the invert of the top 15 from that event. He didn’t stay there long, however, and faded to 26th by the end. None of the underdogs made the top 10, with Brandon Brown having the best result in 11th. Alex Labbe ran 12th, Mills was 13th for the second straight race, Jeffrey Earnhardt wound up 14th and Sieg rounded out the top 15.

On Thursday night, the NASCAR Gander Outdoors Truck Series took their turn at Richmond and one of the biggest stories ended up being Codie Rohrbaugh charging from his 28th starting spot to finish sixth. Also landing a top 10 was ninth-place finisher Timmy Hill.

Joining Rohrbaugh and Hill in the top half of the rundown were Austin Wayne Self and Tate Fogleman, who finished 14th and 15th, respectively.

The Cup stars get their short track on again this weekend at the high-banked Bristol Motor Speedway. Bubba Wallace scored a top-10 finish in the spring, so he’d be a good one to keep an eye on. Another driver who could fly under the radar straight to the top of the heap is Daniel Suarez. Suarez finished 18th in the spring race this year, the best ever for Gaunt Bros. Racing outside of a superspeedway.

As for the Xfinity Series teams, Moffitt has been rather competitive this season and is the most recent Truck Series winner at Bristol. Another good one to watch for is Brown, who has finished 12th and seventh in his last two Bristol races.

Looking to complete the underdog trifecta? Hill is going to be your guy in the Truck race. Hill is coming off a ninth at Richmond and finished seventh in the Xfinity Series event on the concrete half-mile last summer.

.@DaleJr is on the call as the field takes the green at @RichmondRaceway!

Tommy Joe Martins will start on the pole for today's Xfinity race. The last time the number 44 started a race on the pole was Tony Stewart at Rockingham in October 1998. pic.twitter.com/oMJPX22A78

A typical Monday morning after a race. Giving the five six a nice bath after a 9th place finish.

Thinking about putting together a vlog this week as we gear up for Bristol to give everyone an inside look on how we get to the track. pic.twitter.com/qqEyLPmRev

I’m a bit confused by this article. What does he mean by underdog? Both JTG Daugherty cars could certainly be considered underdogs, and both finished in the top 20. What am I not understanding?