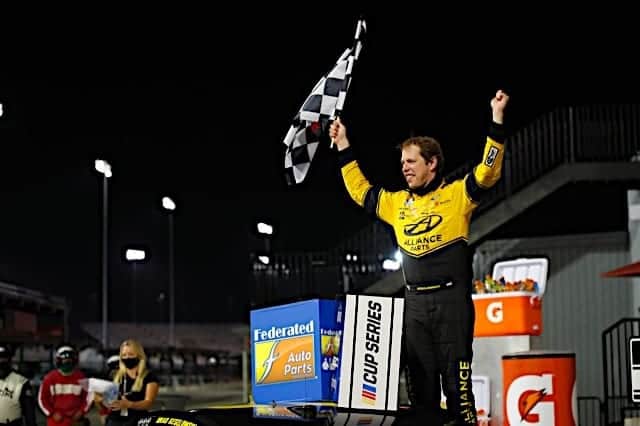 Did you notice? … Brad Keselowski has become the 2020 NASCAR Cup Series championship favorite? Keselowski’s dominating performance at Richmond Raceway Saturday (Sept. 12) proved he might be one to beat at Phoenix Raceway.

The No. 2 Ford Mustang of Team Penske had one of the fastest cars of the night and led nearly half the laps en route to his fourth victory of the season. After Keselowski took the lead on lap 121, he maintained control for much of the race.

How fast was @keselowski last night?

His fastest lap was 1.31 MPH faster than anyone else's at @RichmondRaceway. No wonder why he led 192 laps. pic.twitter.com/40HE47QPs8

He and his pit crew were flawless all night, while other championship contenders faltered. Austin Dillon and Denny Hamlin, who led 55 and 45 laps early on, sped on pit road on lap 84, following stage 1. Dillon later missed entering pit lane but was still fast enough to recover from his mishaps to rebound to fourth at the finish. Hamlin, however, ended outside the top 10 in 12th place. Kevin Harvick also had his own miscues: on lap 185, he had a commitment line violation and had to serve his penalty. He was seventh at the end, but no one could outdo Keselowski.

It appears the 750 horsepower package bodes well for Keselowski, as he led 184 laps at New Hampshire Motor Speedway on Aug. 2. He overpowered Hamlin, who was hot on his heels throughout the final laps, that day. At Bristol Motor Speedway in May, Keselowski led 115 circuits en route to the win.

However, he’s not just good at the shorter tracks; he also has performed well at 1.5-mile courses this year. In fact, his first win of the season came at Charlotte Motor Speedway in the Coca-Cola 600. He only led 21 laps, but he held off Chase Elliott (on fresher tires) to capture the prestigious victory.

So how does the rest of his playoffs look? Well, he has three short tracks using the 750 hp package and three 1.5-mile tracks. Unfortunately, there’s also two somewhat wildcard courses — Talladega Superspeedway and the Charlotte Motor Speedway ROVAL.

After Bristol comes Las Vegas Motor Speedway, one of Keselowski’s best racetracks. The first race in the round of 12 holds one of his longest top 10 streaks, reaching back to 2013. He won this race two years ago after leading 75 laps. Earlier this season (before the COVID-19 pandemic halted competition), the Michigan native crossed the finish line in seventh place.

The next two events in this round are wildcards, though Keselowski does have some good results there. He’s won five times at Talladega (the most of all active drivers) but has unfortunately ended outside the top 10 in the past five races. Then at the Charlotte ROVAL, he crashed out from the lead in the inaugural race but rebounded to finish fifth in last year’s event. There are obvious favorites at road courses, but if he can avoid trouble on the track, he should move on to the next round.

The Round of 8 consists of two intermediate tracks and a short track, and Keselowski has had some success in two of these. In July at Kansas Speedway, he was runner-up after leading 30 circuits. Last spring he won in overtime after leading 12 laps. He did have a poor result last fall, though, after making contact with Daniel Suarez while three-wide in the pack. He ended in 19th place.

He hasn’t performed as well at Texas Motor Speedway, but he did finish ninth there in July. Martinsville Speedway, however, is one to keep an eye on. Keselowski has only had one finish outside the top 10 since 2015 and won twice during that span. One of those wins came last year where he flattened the competition, leading 446 laps.

Lastly, at Phoenix Raceway, host of the championship race, Keselowski led 82 laps before ending 11th in March (that was after getting in an early wreck). It hasn’t been a great place for him in recent years, though, as he only has four top 10s in the past 10 events. Still, if he and his team bring the same car that he won at NHMS and Richmond, he’ll be tough to beat.

But who stands in his way of the title? The obvious favorites are Harvick and Hamlin, who have won a combined 14 races already this year. Don’t count out Martin Truex Jr., though; he finished a strong second to Keselowski last Saturday at Richmond. The 2017 champion won at Martinsville earlier this season after leading 132 laps. Also, he charged hard down the stretch at Darlington Raceway, but misjudged Elliott’s run on the outside and wrecked them both. Truex has some good races coming up and can possibly sneak a win should he get to Phoenix.

Also, throw Elliott’s name in the hat as a contender, as he won at Charlotte and the Daytona International Speedway road course this year. And, as previously mentioned, he was leading in the final 30 laps of the Cook Out Southern 500 when Truex came up and ruined his day. He led 114 laps before resigning to 20th place.

He has one to look forward to, though: the Charlotte ROVAL. No one could forget his celebration last year after rebounding from an earlier incident. Additionally, he won at Talladega that same year and at Kansas in 2018. If he can avoid Joe Gibbs Racing (or other cars), he just might make it to the end.

And yes, I know Kyle Busch hasn’t won a race this year, but you just can’t ignore him. He’s in too good of equipment and too experienced to be counted out. The driver of the No. 18 Toyota has two straight top 10s and ended fourth at Texas, Bristol and Charlotte earlier this season. The reigning Cup champ is stellar at Thunder Valley, having posted eight victories. In fact, the only place he hasn’t won at yet (of the remaining races) is the Charlotte road course. Busch can always just earn enough points to make it into the next round, which would give him a chance to take the championship at Phoenix. After all, he won there last year and in 2018.

But the biggest dark horse, as of now, seems to be Dillon. Though he only has one win, it was at Texas. He has two top fives and four top 10s in the past six events and led 55 laps last week. His team can give him a strong car, and crew chief Justin Alexander can make the right pit calls to put his No. 3 car in victory lane. Though it will be tough to beat Harvick at Texas (should he make it that far), he’s done it once before and can do so again.

Still, Keselowski certainly is one of the strongest of the aforementioned drivers and will be one to watch come November.

I just find it amusing that whoever has won the most recent race automatically becomes the Championship “favorite.” Remember that just last season, the driver deemed by the experts to be the least likely to win among the Final Four actually won the Championship!