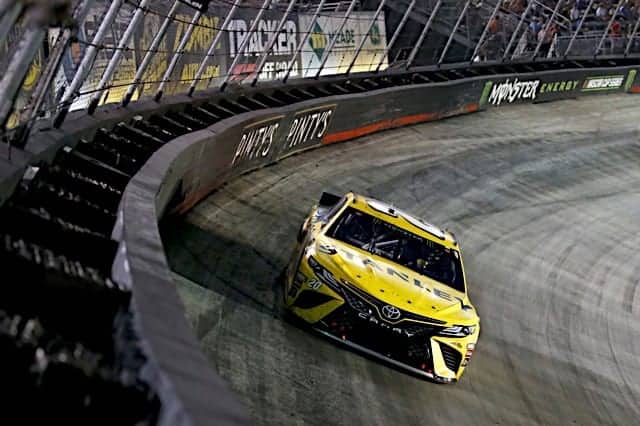 With the NASCAR Cup Series playoffs underway, the rest of the field often gets overlooked.  Actually, that’s putting it mildly; they’re generally soundly ignored as the drivers in title contention battle it out each week. But there are drivers outside the playoffs with plenty to prove, and they’d love nothing more than to waltz in and take the spotlight with a win. Who’s most likely to pull it off? Here are the top candidates.

Why he can win: Reddick has shown a ton of promise in 2020. Since the two-time NASCAR Xfinity Series champion joined Richard Childress Racing’s Cup team this year, the entire organization has improved drastically. Reddick might not get credit for all of that, but it’s hard to argue he’s helped RCR as a whole step up its game. His two top-five finishes and seven top 10s are as good as playoff driver Matt DiBenedetto’s stats and a top 10 better than fellow rookie Cole Custer’s. Despite Custer’s win at Kentucky Speedway, Reddick has led more laps as well. Teammate Austin Dillon is contending as well, so the cars are competitive.

Why it’ll be hard: Reddick hasn’t yet shown he can run consistently in the top five and 10 and be there at the end of the race. That doesn’t mean he can’t win (Custer has, after all), but many times a string of top 10 runs is the precursor to a first Cup win. Reddick hasn’t had that yet.

Where it might happen: Vegas, baby. Reddick has wins in Sin City in both the Xfinity and Gander RV & Outdoors Truck Series.  He finished 18th at Las Vegas Motor Speedway earlier this year, but he’s improved since then.  He also has NXS wins at Bristol Motor Speedway and Talladega Superspeedway.

Why he can win: Because he’s done it 83 times. Johnson is the best driver of his generation, and he wants nothing more than to go out on top. He’s fought bad luck this year, but only narrowly missed the playoffs (by six points) after spotting William Byron two full races’ worth of points. Johnson has multiple wins at seven of the last eight venues, with the lone holdout being the infield road course at Charlotte Motor Speedway, where he’s posted a pair of top 10s in the only two races run there. It’s simply hard to believe he hasn’t got one more win in him.

Why it’ll be hard: Johnson has struggled to find consistency this year — and he’s made some very uncharacteristic mistakes along the way, most notably a solo crash at Darlington Raceway in the spring while leading with the best car in the field. In order to get a win, he needs to be in position to capitalize on every position, and he hadn’t done that consistently. Also, with three teammates in the playoffs, Johnson is scraping the bottom of the barrel at Hendrick Motorsports — that’s still better than many drivers get, but the organization’s focus is elsewhere.

Where it might happen: Based on past performance, if he’s got the right car, anywhere. Johnson has at least two wins at every track left except Charlotte.  But one of his best performances of the year was at Daytona International Speedway’s road course, so that bodes well there. With seven wins at Texas and a pair at Talladega, he’s shown he’s dangerous.  But Martinsville Speedway has been his personal playground, with nine wins. Johnson’s former teammate and car owner Jeff Gordon won for the last time at the storied short track.  Can Johnson follow in his old mentor’s footsteps one last time?

Why he can win: Jones hasn’t set the world on fire in the Cup Series, but he’s got two wins under his belt.  He’s a former Truck champion and has nine wins in his short Xfinity career. He has plenty of raw talent.

Why it’ll be hard: Jones is in a similar position to Johnson: he’s the lone non-playoff driver at Joe Gibbs Racing and a lame duck, out of a ride after this season, and unlike Johnson, he doesn’t have the “retiring seven-time champion” card to play at JGR. You can certainly argue that Jones never got a fair shake at JGR, given only one full Xfinity season before being brought to Cup at just 20 years old. But he hasn’t shown consistent success, and that makes winning now that much more difficult.

Where it might happen: Jones finished a solid sixth at Texas in mid-July, and he has three Xfinity and a Truck Series win there, so it’s safe to say he’s comfortable on the 1.5-mile oval. That’s his best shot at a parting shot to JGR, but he also has two NXS wins at Bristol and two Truck wins at Phoenix Raceway… and winning the title race as an outsider would certainly be a statement as Jones looks for a new seat for 2021 and beyond.

Why he can win: Richard Petty Motorsports has shown improvement this year — the RCR satellite has definitely benefited from that organization’s improvement. Wallace has had a career-high five top 10s in 2020. The No. 43 car has finished almost four spots better than last year on average, and Wallace has mixed it up with the leaders from time to time. When he’s had the opportunity to race competitive equipment, Wallace has had strong finishes.

Why it’ll be hard: RPM as an organization isn’t there yet. They’re still badly underfunded, and with Wallace moving on after this season, the focus may already be on the future for both team and driver.

Where it might happen: Talladega. Both RPM and Wallace have been strong at superspeedways in the past, with the organization’s most recent win coming at Daytona in 2014. Wallace has been better at Daytona than Talladega, but he’s a decent speedway driver. He also has a pair of Truck Series wins at Martinsville, and RPM has had good finishes there.

Why he can win: After a dismally rocky start to 2020, Bell has had some bright spots. He sat 32nd in points after the first five races of 2020; he’s since climbed as high as 19th and is currently 20th. Those are decent gains, even against smaller teams. The 2017 Truck Series champion has talent to spare, and he’s got a vote of confidence from JGR, where he’ll replace Jones next year.

Why it’ll be hard: Despite an alliance with JGR, Bell’s Leavine Family Racing team doesn’t have that level of equipment, and they haven’t been a contender.  And the team is already sold; while they want to go out with a victory, it’s understandable that hearts and minds are already looking elsewhere when they’ll be out of a job in eight weeks. It’s not that they won’t try, but the underlying insecurity can play a role.

Where it might happen: Bell excells on flat tracks, and he’s got Xfinity wins at Kansas Speedway and Phoenix to show for it. He also has an Xfinity win and a Truck Series win at Texas, so that’s a possibility, as is Bristol this weekend, where he finished in the top 10 earlier this year and where the No. 95 team finished second after leading the most laps a year ago with DiBenedetto.

Listen up, jj can’t drive a lighter car with less hp. He showed y’all that in Xfinity and for the last three years. But some never learn and still bet on a lame horse. Another writer drinking the bubba cool aid. Bubba said Chip wants him or is it Rick. Regardless, some writers will bite. Right !

Another rumor I just read has him going to the seat vacated by Suarez at Gaunt Brothers. That is by far the most believable scenario I have heard yet. More a of a lateral move if you ask me, although Gaunt Brothers seem to be more serious about getting better than RPM.

The only Bubba worth talking about is POLLARD.

Bubba 4 laps down, again, and it’s not over. JJ just as bad.