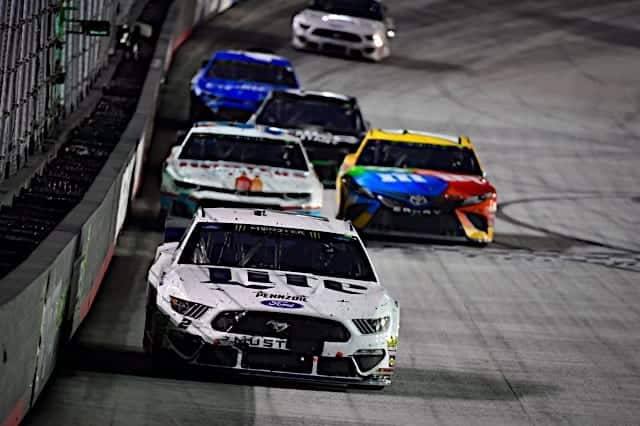 Now, a great many NASCAR tracks have undergone several changes and transitions over the years, but perhaps none has had any more dramatic than Bristol Motor Speedway.

It’s gone from a half-mile flat track to a 0.33-mile facility with 36-degree banking in 1969, which has been altered to range from 24 to 28 degrees. Its surface has been both asphalt and concrete. It once could accommodate only about 30,000 fans (and seldom sold out) which was eventually increased to 160,000 and accompanied by suites and other amenities.

For many years the track’s races, especially its annual late summer night event, were sold out weeks, if not months, in advance.

In this time of pandemic, the speedway can provide only limited seating to be in compliance with safety rules. For this weekend’s event, those seats are sold out.

Indeed, the night race at the track known as “The Last Great Colosseum” has routinely been one of the most anticipated events in each NASCAR Cup Series season.

For many years Bristol’s races were fan favorites because of the method drivers had to use to be competitive. Because of the high banking, they raced at speeds unmatched by other short tracks. And given the scarcity of racing room offered at all half-milers, passing was at a premium.

Many times, drivers had to employ the “bump and run” – or any other form of contact – to get around each other. Too much of that stuff, particularly if not correctly done, led to mayhem. And Bristol saw more than its share of that.

It had its critics, some of whom were drivers.

But fans loved it.

Many of them were disappointed when the banking fell by as much as 12 degrees. Speed dropped a bit, but the key was drivers found more room to pass without using bumping tactics.

Almost all of them approved. Many fans did not, and I daresay there are those today who wish for the “good old days.”

Now, I freely admit I come from those days. I agree that in some ways, they were better. They were simpler. Fans were immersed in the sport – they were willing to buy tickets to sit on wooden planks – and they knew it well. The media was smaller, but its relationship with competitors was far more personal, which allowed for good reporting and human interest pieces.

Yes, today, technology is better, exposure is more widespread, money is plentiful, safety is vastly improved, speedways are showpieces and there are more fans – but not as many completely immersed in NASCAR as in the past.

Some fans who know of the bygone years have said the competition – the racing – was better in the “good old days.”

It wasn’t. Not even close.

Oh, there were plenty of exceptional, competitive races with exciting finishes. Too many to count. But at the same time there were countless events that were downright boring. It’s the same as today.

Bristol serves as a good example of this. For every time Dale Earnhardt, Bill Elliott, Rusty Wallace, Terry Labonte and others made fans get on their feet, there was another race that nearly made them fall asleep.

There was one race I’ve used as an example more than once.

It happened on April 17, 1977. The Southeastern 500 was the eighth race of the season. Cale Yarborough was in his second season as Junior Johnson’s driver and would win his second Winston Cup championship that year.

Yarborough and Johnson were always tough on short tracks, and no one thought it would be any different at Bristol. To say it wasn’t is an understatement.

Yarborough won by an astonishing seven laps. He led 495 of the 500 circuits. There were only two caution periods for nine laps, so he barely slowed down.

“The only way I was going to catch him was to have someone in the pits shoot out his tires,” Dick Brooks, the second-place finisher, said.

The crowd was announced at 30,000, but half of that was gone well before the race was over. Thirty minutes after the event, the grandstands and parking lots were empty. The media were packing up.

In my opinion, it stands as the primary representative of how bad a NASCAR race could get. If it had happened today and not the “good old days,” social media would melt from the heat generated by disgusted fans.

But then, I seriously doubt we’ll see anything like that this weekend at Bristol.

How did Yarborough get a 7 lap lead if there were cautions every 10 laps?

Cale won because the “race” played out like it should and there were no phantom debris cautions or TV time-outs for a “competition caution” or staged cautions. Yeah, it was a lot better then.

The only point was, there couldn’t be cautions every 10 laps AND someone win by 7 laps. The writer used both as the reason why the old Bristol wasn’t as good.

I know. I watched the beating Geoff Bodine gave at North Wilkesboro and it was great. It wasn’t a “product” then.

I preferred the “old” Bristol and yes I liked the bump and run. I was fortunate to go to Bristol before the last round of changes were made to the track AND before the COT showed its ugly self.

These days almost all races are IMO boring. NASCAR continues to manipulate races. It used to do it with its phantom cautions to be used whenever they felt it was necessary to rescue a favorite. With its institutionalized “stages”, it allows for the race to be manipulated in a different fashion. They have removed the challenge of having to manage tires and fuel. Plus the “chase” in all of its various iterations have made the championship a total joke.

You say there are “more” fans. There were more fans. I agree with you that there are far less “dedicated” fans and I include myself in that group. Once I would have known exactly when and where the Cup series was racing. Now I don’t. If I didn’t get an e-mail giving me the schedule, I wouldn’t know when to look. A secondary topic is that I despise the late day starts. Night races are fine but the late afternoon starts are useless.

men. Once the ‘chase/playoff’ or whatever started, Bristol became like every other track. I guess it’s hard for people to understand that, having at least 1 track where the racing was totally unlike any other was one of the reasons it was such a hit. Yes, lots of crashes may not be the most pristine racing, but it certainly is entertaining. besides, condemning fans for enjoying the ‘bump and run’ while ‘Dega and Daytona are on the schedule is hypocritical. The last night race I attended was 2007. after nearly falling asleep in the stands because the racing was so polite (no one wants to upset the ‘chosen’ in the chase/playoff), that I didn’t renew my tickets. Several years of run of the mill races no longer justified the expense.

I’ve always said I had no desire to go to a demolition derby and I wouldn’t want all the races to be like the old Bristol and in general I don’t like to see a bunch of wrecks, but twice a year it was nice to feed that dog and watch the spectacle. Plus, since it was a short track, being involved in a wreck wasn’t an automatic DNF.

You are right, I wouldn’t want all the races to be like the old Bristol either but as sb pointed out with the wreckfests of Talladega and Daytona on the schedule it is hypocritical of both the writer AND NASCAR to bemoan the way racing at Bristol was – before the chase/playoff/crapshoot whatever it is these days. Unfortunately with the new rules in place about being able to fix the cars, these days a wreck anywhere is an automatic DNF unless it is really minimal damage. I remember races at Bristol, Richmond and Martinsville where cars would be back on the track looking more like modifieds than cup cars (and yes many laps down) but they were able to finish and not have that DNF. Maybe that wasn’t right but it could certainly be interesting to watch which I am far less inclined to do than I was 10 years ago.