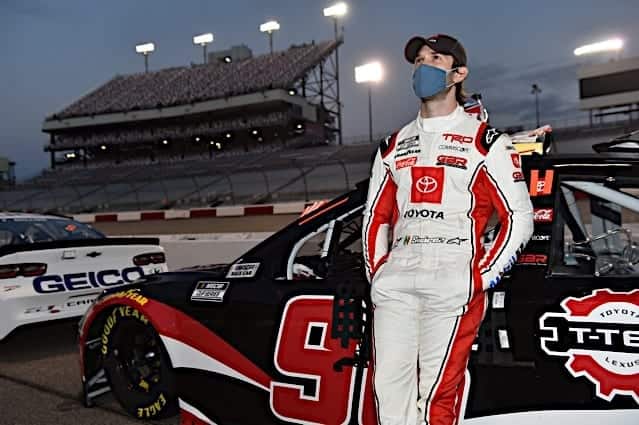 The silly season rumors have been hot and heavy recently, and while there still is a lot that needs to be sorted out, one thing was made certain this week. On Monday, it was announced that Daniel Suarez and Gaunt Brothers Racing will part ways following the 2020 season.

The news came as a bit of a shock, considering Suarez and Gaunt Brothers Racing were in their first season together and both parties seemed to indicate they were interested in a long term partnership together.

However, a lot of things have changed since January, and Suarez finds himself as a free agent once again. The 2016 NASCAR Xfinity Series champion’s future looks murky. There are plenty of rides available for Suarez whether it be in the Cup, Xfinity or Truck Series garage, but where he will end up for 2021 is still very unclear.

This has led us to wonder: Will Daniel Suarez ever become a consistent winner in the Cup Series?

The Monterrey, Mexico driver’s future is debated this week by Clayton Caldwell and Mark Kristl.

There comes a time in a driver’s career when they get opportunities to capitalize. These moments are few and far between. Daniel Suarez has already had two big-time opportunities to prove his worth in NASCAR. It’s not often someone gets a third shot at it.

Big-time rides are rare in NASCAR – there are only a few seats, and everyone wants them.

There have been numerous drivers in the history of NASCAR who were extremely talented racecar drivers who, for one reason or another, did not win in NASCAR despite having a ton of talent. Think of Steve Kinser or Juan Pablo Montoya, two talented drivers who just couldn’t make it happen in Cup.

But after three middling seasons in strong cars, it appears Daniel Suarez is going to be in that boat. He had two opportunities to win races early in his career. He was the defending Xfinity Series champion and had plans to run for the title again in 2017 until Carl Edwards abruptly retired in January. That led to a late promotion to the Cup Series with Joe Gibbs Racing, possibly before he was ready.

In his three years in big-time equipment in the Cup Series, Suarez struggled, there’s no question about it. He finished 20th in his rookie year with a team capable of making the final four at Homestead-Miami Speedway. The following year, he finished a mere 21st and was released from JGR.

Suarez found himself in a new home at Stewart-Haas Racing for 2019. It was a fresh start for him with a new team and a new outlook, and the expectations were high. But he again missed the playoffs in a car that had easily made it to the playoffs for the past few years. In his prime, Suarez should have gone much farther than he did.

While I don’t think his lack of success in Cup was 100% his fault, Suarez has failed to capitalize on his opportunity in prime rides. These opportunities don’t come around often. Will he get a third shot at the big time? I find it highly unlikely.  – Clayton Caldwell

Suarez is only 28 years old. He can become a winner in the Cup Series. He just needs a long-term home to reach victory lane for the first time in his Cup Series career.

Suarez found a full-time ride for 2019 with Stewart-Haas Racing, but for 2020, that full-time ride was with Gaunt Brothers Racing, not a contending team. The team lacked a charter and attempted to run its first full-time Cup Series season. The year began costly for the team as Suarez wrecked out of his Duel race, failing to qualify for the Daytona 500.

Since then, he has failed to muster any top-10 finishes, but he only has one DNF – in the second Cup Series race at Daytona International Speedway. While his 31st-place showing in the point standings obviously is reflective of his performance, Gaunt Brothers Racing faced an uphill battle entering this year.

This year, there were two new winners in the Cup Series – William Byron and Cole Custer. Both drivers wheel cars from championship-winning organizations. Byron won in his third Cup season whereas Custer won in his rookie season. However, Custer won at Kentucky Speedway by acing a late restart.

Nevertheless, those two drivers are proof Suarez can win in the Cup Series. He just needs a long-term team.

Suarez is rumored to replace Bubba Wallace in the No. 43 car for Richard Petty Motorsports. The team has shown an uptick in performance this year. With a charter, Suarez would not have to worry about qualifying into every race.

With that peace of mind, Suarez and Richard Petty Motorsports could work together to build the program. The team has shown a commitment to its drivers. Wallace drove for the team for four years while his predecessor Aric Almirola spent six years driving for RPM.

After NASCAR returned from its COVID-19 hiatus, there have been no practice sessions. It has been a detriment to Suarez in his first season driving for a new full-time team. There is less track time to improve its No. 96 Toyota, and it also leaves the team with a smaller notebook for the next time the Cup Series races at each respective track.

Should practice sessions return next year, Suarez would absolutely mount a significant upward curve in his first year with the team, whether it be Richard Petty Motorsports or another team. He and the team would have more time to hone their communication, tune the car, and study for the race itself.

Suarez’s NASCAR career is at a crossroads. Should he fail to land a long-term ride in the Cup Series, he will not grow as a driver. However, if he joins a team with a multi-year contract, Suarez can continue his development. He has demonstrated he knows how to keep a car clean to finish a race. Winning a Cup Series race is still realistic for Suarez. He just needs a long-term team to do it. – Mark Kristl

I feel bad for Mark, having to pretend to think Suarez will ever win a race outside of a fluke like Justin Haley or Chris Buescher.

In today’s Nascar you need to deliver results to find a long term home. Just ask Erik Jones, someone who actually won races for Joe Gibbs.

He’s already been with the two best teams in the sport and could deliver nothing. He’ll be a forgotten also ran the rest of the time he runs cup.

I think Chris Buescher is a decent driver who has had the misfortune of coming up in the outdated Roush-Fenway organization. He would win a small number of races if he was driving for a top notch team like JGR. This is to say, Suarez is not up to Chris Buescher’s talent level. Suarez is a poor driver who can stay out of trouble at his best.

Must have run out of ideas for a good topic to debate.

Suarez and Eric Jones are a byproduct of the new NASCAR- Driver money talks. It has created an atmosphere of looking for the next driver with money, as opposed to sticking with,and working to improve, your current drivers.
This attitude is pushing drivers to Cup too fast, and creating a shortage of top rides- Just ask Chase Briscoe and Austin Cendric. Both are being pushed towards Cup, but no space yet.

I’m not sure when drivers started having to bring their own money along (as opposed to the team having the money and finding the best driver,) but I believe that has been a detriment to our sport.

I don’t think it has changed the number of top tier cars at all. However you have the contradiction of the teams insatiable desire for more money colliding with the established drivers hanging around longer and younger drivers, some of them family of team management, wanting those rides and bringing money.
Maybe when the older generation finally leaves it will level out for awhile.

There is a wild rumor flying around that Bubba Wallace will be taking all of his new sponsors to Gaunt, with Denny Hamlin (& other famous investors?) also buying into the team. The rumor goes that the Gaunt team will be buying, or leasing a charter and will be getting more TRD support, along with leasing cars & race day crews from Gibbs (similar to the deal LFR had this past year). This got me to thinking that Suarez might have been let go by Gaunt to make way for this crazy plan?

Suarez will not be in the running for either of the current top Cup ride openings (HMS #48, CGR #42). His remaining Cup opportunities would be a semi-lateral move to one of the other teams languishing in the high 20’s that have openings, such as JTG’s #37, RPM’s #43, or GoFas’ #32.

Too many comments by people that don’t get behind the wheel in these races !
Suarez is where he is for a reason , so we should wait and see what the boy can do as he has been doing something right in order to be the topic of this post !
Blessings for Suarez and all of us that enjoy the sport !

Bill B
Reply to  Valdemar Meza

Whether you get behind the wheel or not, if you’ve been watching and paying attention for a long time, you have seen that once a driver gets a chance in not one but two top tier teams (JGR and SHR) and haven’t produced decent results, rarely do you get an opportunity with a third top tier team. So, yeah, none of us have been behind the wheel but we have seen similar scenarios and can draw valid conclusions based on our experience following the sport. It has nothing to do with his talent. You get a chance and you either capitalize on it or you don’t. Mr. Suarez did not. Maybe he will prove us all wrong but I wouldn’t bet on it.

It’s so funny that you have followed the sport so much and you fail to remember other drivers that took years to win and are considered great drivers. One example is Michael Waltrip. It took a great team and for a few years for him to win. He didn’t just get on a car and began winning. Suarez has gotten 3 years of Cup seat and has had 3 different crew chiefs. How can anyone get a chance like that. Sometimes people get lucky and win like Cole Custer but I think it all goes back to a name Suarez and Custer. We need American names to win that is how people like those cutting Suarez down feel. How can a Mexican come in and win, you hated he won the Exfinity Championship. Not everyone can do that or I forget all the Nascar drivers have won that honor. He is there because he has talent not because of his name. If it’s you all don’t want a Mexican to win just go out and say it don’t be afraid.