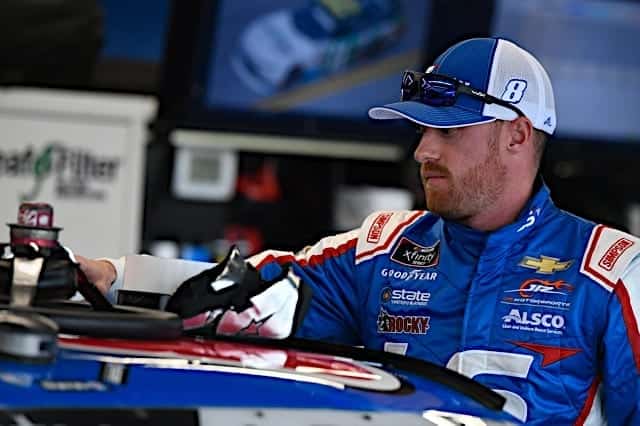 As many know, in order to compete at a competitive level of NASCAR – and really all racing series – drivers need funding. Not many work harder to nail down sponsorship than Jeb Burton.

Burton, now 28, had the world by his fingertips seven years ago when he was running full-time in the Gander RV & Outdoors Truck Series with Turner Scott Motorsports. In his breakout 2013 campaign, he scored his lone NASCAR national touring win at Texas Motor Speedway, tallying a total of five top fives and 11 top-10 finishes. In the process, he won seven pole awards.

Then 2014 came. One month before the season kicked off at Daytona International Speedway, his sponsor, Arrowhead, defaulted on its payment, meaning Burton was out of a ride. Luckily for him, he landed on his feet at ThorSport Racing en route to an eighth-place finish in the championship standings.

In 2015, he jumped to the Cup Series with BK Racing, running in 28 races. After a disappointing season, he moved to the NASCAR Xfinity Series in 2016, planning to run a full season with Richard Petty Motorsports. Unfortunately, his primary sponsor J. Streicher reportedly missed payments to the team, forcing the team to shutdown its Xfinity program in late May.

Since then, it’s been a battle for Burton in the NASCAR ranks, picking up rides wherever and whenever he can.

Then his break came. Prior to the 2019 Xfinity season, JR Motorsports tagged him on to drive in seven events, where he scored a pair of top-five finishes and six top-10 efforts. With his efforts, LS Tractor upped its primary sponsorship from two races to five for 2020, meaning he could be in the car for a total of 11 events.

Through eight races this year Burton labels 2020 a “disappointing” season, even though he is coming off a career-best second-place finish last weekend at Richmond Raceway.

“Daytona, Talladega [Superspeedway], we gave those two races away; got wrecked at Daytona, at least we finished at Talladega,” Burton recently told Frontstretch of his season. “The good thing is, we’ve been in position to win [four] races. We’ve been right there.

“I’m not in the seat every week, so it gets extra frustrating when you miss it a little bit and you run fifth or seventh, because I don’t have next week.”

In the first race of the season at Daytona, Burton led a race-high 26 laps. But with five laps to go, the No. 8 Chevrolet was involved in a 13-car pileup, resulting in a 23rd-place finish. On paper, his 17.2 average finish this season isn’t all that attractive. Even while he was on a career high in the second race of the Richmond doubleheader last week, he experienced a brake failure in the first while running inside the top five. At Kentucky Speedway in mid-July, he was involved in a lap 1 incident, placing 34th.

“I’ve run [15] races with JRM, and every one of them I’ve been inside the top nine besides [three] of them that we’ve had parts failures. Then this year I wrecked one time – that was my fault, and then Daytona was out of my control,” Burton said. “Every race we’ve been fast. We just have to put it all together. […] Mentally and physically, I’m the best I’ve ever been in all categories.”

Burton believes the biggest key to winning races is communication. When he’s not driving in the car, he’s not able to communicate with crew chief, Taylor Moyer, in race conditions.

The Virginia native admits the morale of the No. 8 team is “not good” this season, due to the fact that anything that can go wrong has gone wrong. Splitting the No. 8 ride with Burton primarily is Daniel Hemric. In 16 starts this year, he has seven DNFs – mostly not of his own doing – with an average finish of 18.9.

“Everybody is just frustrated,” Burton said. “A lot of things have happened out of my control and out of Daniel’s control. It’s frustration built up, but those guys are working hard, and they believe in me. I have no doubt in my mind that we can’t go down there this weekend and win the race.”

In order for Burton to get more chances behind the wheel, he’ll ultimately need to bring more sponsorship dollars to the table. This season he’s had primary sponsorship from LS Tractor, State Water Heaters and Rocky Boots, collaboratively making him competitive with JRM.

Finding that funding in order to race is what thrives Burton to continue pursuing racing.

“It’s all I work on. It’s something I work on every single day of the year,” he said. “I work every single day, trying to figure out how I can find businesses deals for my partners, because a logo on a car just doesn’t cut it. It costs so much.

“All my partners work really well together. They all want to help, and they know how hard I’m working for it and want it. That’s something that’s very special with my partners.”

While Burton has a small group of people that help him pitch sponsors, his wife Brandi has played a vital role. The couple met in 2015, when Burton sought after her a non-traditional way, seeing a picture of her on social media while sitting at a restaurant in South Boston, Va. He asked his friends about her and played his cards.

Brandi, who is an ICU nurse and knew nothing about racing growing up, helps Burton find potential sponsors by making sponsorship decks, which he’ll ultimately send out to different companies.

“What sets him part is he’s working his best to try and form these deals,” Brandi said of Burton. “I try to help him out as far as decks and help him find other partnerships so he can find those B2B relationships and make the partnership work for all of his partners all around.

“I find it really fascinating. I think what sets Jeb apart, too, is [that] it makes him have more skin in the game. For both of us, every single race he’s out there, it’s a major difference in having next week.”

Doing it mostly by himself, Burton says the first step of securing funding is to find the right contact. Should the company sign on, then it’s about being in a competitive scenario on the track so the sponsors can get exposure.

With Burton running inside the top 10 for JRM, it gives the company TV time. That’s ultra-important in 2020, given sponsors aren’t allowed to have activation at the racetracks due to the ongoing COVID-19 pandemic.

But that’s when the pressure amps up.

“In our sport, if you don’t perform, you’re done,” he said. “There are some people that can survive and just ride around, but it’s not going to work for me because my partners want exposure. When you run good, everybody is excited, and it leads to more opportunities. I’ve got to run well for myself, my team, my family. That’s how I eat. That’s how I make money, is racing. If I crash out, I can promise you, you make less money.

“It all boils down to running well. It’s all I think about and want to do and want to win. We’re working hard to put it all together.”

In a day where the almighty dollar surpasses driver talent in most cases, he believes running well is still valuable. At the same time, you better bring some change to the table.

“Winning helps you find more funding, I believe,” he said. “I can promise you it does help. But at the end of the day, you still have to have partners, nobody is just going to pay for it themselves unless you’re in a really, really lucky situation.”

When a sponsor falls through, or doesn’t respond to the marketing deck, Burton can turn to his wife for support.

“I try to let him vent the best he can whenever he is racing or if he’s had a bad day,” she said. “This is his career, and this is what he signed up for, so I’m going to support him the best that I can. Anything that he needs to talk to me about, I’m his wife, I’m his go-to, and if there’s any way possible that I can help him, I try to with his partnerships, just so it’s not so much stress on him. It’s difficult when everything is on your shoulders.”

Dale Earnhardt Jr., co-owner of JR Motorsports, sees how hard Burton chases after sponsorship, allowing him the opportunity to race.

“Jeb Burton grinds hard with his partners,” Earnhardt said on this week’s episode of the Dale Jr. Download when talking to Justin Allgaier about sponsorship. “He works really hard on his partnerships, developing those partnerships, going the extra mile.”

When Burton hasn’t been racing this season, he’s been a backup driver for JRM, still traveling to the racetrack. That’s a tough ask for him.

“That’s something that is not fun at all. I hate it, to be honest,” Burton said. “I appreciate the opportunity being there, but it’s miserable for me to be there watching someone else drive the racecar.”

When not at the track to compete and the Cup, Xfinity and Truck races are ongoing, Burton still watches to keep up with what’s going on in the racing world.

But if it’s a mentally grinding day, he has other ways to escape, still living in Virginia.

“Some days are more stressful than others for him,” Brandi said. “But if he’s having one of them really rough days then I try to direct him to the tractor or to his dad’s farm to get him to go burn some fields, go planting, go work on the farm, go do something like that. Generally, that’s a pretty good stress relief for him.”

Burton admits running for JRM has revived his racing career, with 10 top-10 efforts in 15 starts driving the No. 8 car. After running this weekend at Bristol Motor Speedway, it will be the first time he’s put a string of three consecutive races together in any series since 2016.

But his end goal is to find funding to become a full-time NASCAR driver once again.