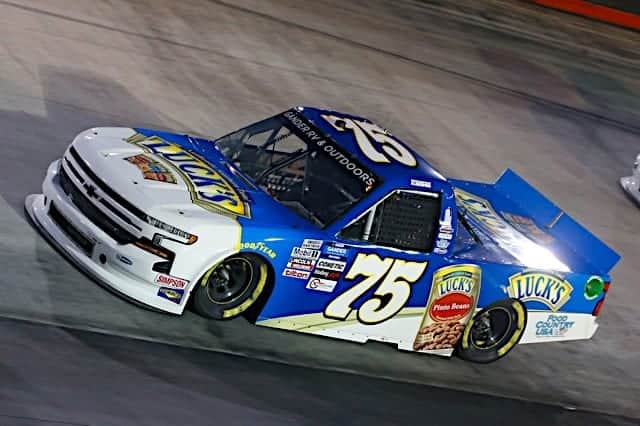 With all of the focus on the Gander RV & Outdoors Truck Series playoffs, Parker Kligerman nearly stole the show at Bristol Motor Speedway on Thursday night (Sept. 17). Kligerman finished fourth in the UNOH 200, coming across the line side-by-side with third-place Tanner Gray.

“We were third there with a couple laps to go, and I just started moving around, seeing if I could find something and fell back to fourth,” Kligerman said in a post-race video. “Thought I had third right at the line but just didn’t have enough. But yeah, a good night, a solid night.”

It was Kligerman’s first Truck top five since Bristol two years ago, when he also finished fourth in Henderson Motorsports’ No. 75.

Due to Kligerman and his Henderson team only running a partial Truck schedule, the part-time driver/TV personality started the race 35th in the 36-truck field. He quickly worked his way up to the front, finishing 15th in the first stage and going up to ninth by stage two’s end.

Then Kligerman began setting a blistering pace. He moved up into the top five while turning the second fastest laps on the track prior to the second-to-last caution of the race.

Kligerman held his ground on the final two restarts and raced Gray tooth-and-nail in the closing laps, missing out on a podium finish by five hundreths of a second.

“It’s impressing, your driver prowess out there. Keep going.” the spotter tells @pkligerman as he moves up to fifth #UNOH200

The top five was huge for Kligerman, a two-time winner in Trucks, but it’s even more sentimental for Henderson. The team operates out of Abingdon, Va., a 30-minute drive from Bristol. The team’s lone Truck victory came at the hands of Kligerman at Talladega Superspeedway in 2017.

“I’ll think we’ll do about one more race this year,” Kligerman said. “We’ll hopefully clean this truck up. It’s our newest piece and obviously fast.”