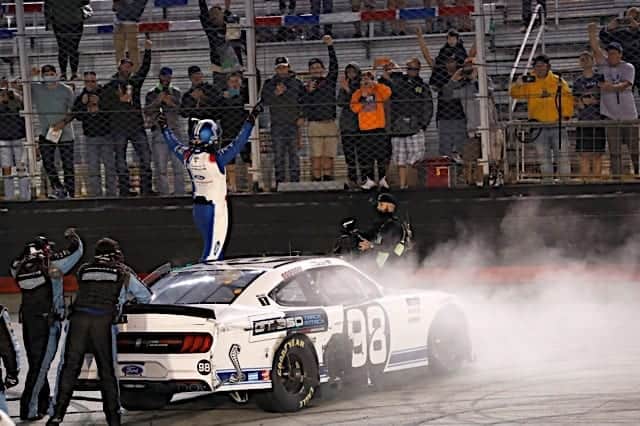 Chase Briscoe is back to his winning ways.

He may not have had the fastest car at Bristol Motor Speedway, but circumstances prevailed for Briscoe as he picked up his series-high seventh win in the NASCAR Xfinity Series this year by winning the Food City 300.

However, it was Briscoe’s primary foe and Ford teammate Austin Cindric who was just a handful of laps away from picking up the victory when heartbreak occurred. Briscoe passed Cindric with just seven laps to go after the power steering failed on Cindric’s No. 22 Ford.

A thankful Briscoe was elated with the luck.

“I told all the guys that there was no way we were getting beat today,” Briscoe told NBCSN. “I was so mad after how we ran last week. I finished second here the last two races and I wanted to win here so bad, but it is awesome that I get to celebrate here with all these race fans.”

Riding high on momentum after sweeping the Richmond Raceway doubleheader last weekend, Justin Allgaier did not look like he was not going to miss a beat as he swept the two stages.

But, after getting beat off pit road by Briscoe and Ross Chastain at the stage two break, the handling on Allgaier’s Chevrolet went sour.

With Allgaier out of the picture, Chastain was initially the point man in the final stage, but when Dexter Bean crashed with 55 laps remaining, Austin Cindric grabbed the lead on the ensuing restart until the power steering ran dry.

However, the boisterous action at the front was not apparent early in the event as silence hallowed around the turns after a grinding crash on lap 63. BJ McLeod slammed the wall before being violently t-boned by Vinnie Miller, who was ironically was driving a car McLeod owns. Although dazed, McLeod remarkable emerged from his battered machine and transitioned into crewing duties for his remaining entries in the field.

Tommy Joe Martins was also collected, but unlike McLeod and Miller, the Mississippi driver was able to continue. The incident prompted a short red flag.

On lap nine, the leaders had already caught the back of the field, and by the lap 40 competition caution, just 17 cars remained on the lead lap.

Later, as the leaders worked traffic, Joe Graf Jr was punted by Brandon Jones and then barrelled into Michael Annett. With nowhere to go, Annett slammed the wall, breaking the right front suspension and ending his night prematurely. The incident drew the second red flag.

Despite the tough end to his regular season, Annett still has a ticket to the playoffs after locking up a spot thanks to an insurmountable points buffer garnered last week at Richmond Raceway.

Along with Annett, 10 others had already locked themselves into the postseason, leaving just one open slot. Entering the event, Brandon Brown held a comfortable lead over 13th place Jeremy Clements, so much so, that he needed just seven points to clinch his first postseason appearance. Brown successfully accomplished the feat as high attrition waterlogged the garage early in the event.

Chastain crossed the line second while Cindric held on to finish third. Harrison Burton and Allgaier rounded out the top five.

Next weekend, the Xfinity Series will trek across the country to Las Vegas Motor Speedway for the Alsco 300 on Saturday, Sept. 26. The green flag is scheduled to drop at 7:30 p.m. ET with TV coverage provided by NBCSN.

I liked how the booth explained about the power steering. How it has changed over the decades. This is the kind of info we want, not how many dogs they have at home.