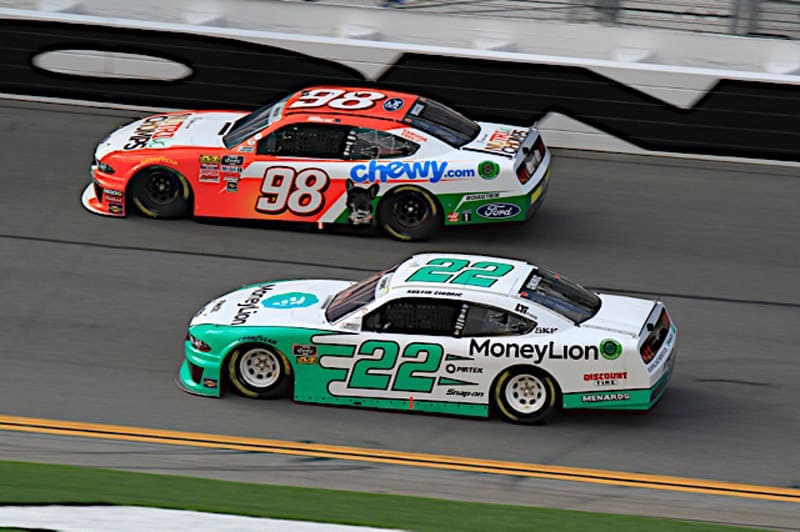 Chase Briscoe and Austin Cindric are ready for the NASCAR Cup Series, make no bones about it.

But the way NASCAR operates nowadays, the Cup Series may not be ready for them.

As silly season continues to heat up with rumors flying every which way, the two leaders atop the Xfinity Series standings are right in the mix to make the jump to Cup next year. It’d make the most sense for Briscoe to enter the No. 14 at Stewart-Haas Racing and for Cindric, with all of Team Penske’s cars filled, to either join Wood Brothers Racing, have Penske add a fourth car or be loaned (a la Chris Buescher to Front Row Motorsports) to another Ford team.

There’s still a ton of moving parts and pieces, and we won’t know who will be driving where for probably a few more weeks at least. But if Briscoe and Cindric don’t make the jump next year to Cup, will it be a detriment to their development?

Well, with the Xfinity cars driving entirely different to Cup cars (which more so model Gander RV & Outdoors Truck Series vehicles with more on-throttle time), plus the adjustment period of moving up to Cup historically taking a few years as opposed to one or two, one would argue that spending another year in Xfinity is a misuse of their talent.

Last year’s Big 3 of Tyler Reddick, Christopher Bell and Cole Custer all made the leap to Cup in 2020 following back-to-back successful seasons in Xfinity. Reddick claimed both titles, but Bell and Custer earned and 15 and eight wins in those two years, respectively, clearly demonstrating they were ready for the leap.

The days of having a Cup rookie be over the age of 25 are long gone. Seeing a teenage Joey Logano and William Byron, or an early-20s Erik Jones and Alex Bowman. are the norm. And look at them now; they’ve won championships, races and have cemented themselves as perennial playoff drivers.

But it wasn’t that way at the start. It took time to develop a different skill set in Cup, to learn the intricacies of how the drivers at the top level race week in and week out and ultimately, contend weekly for race victories.

Custer’s win this season was an anomaly (first rookie to win since Chris Buescher’s rain-shortened triumph at Pocono in 2016), and rookies in the Cup Series going to victory lane shouldn’t be viewed as normal. It’s anything but.

That’s why Bell and Reddick, just like Jones, Byron, Bowman, etc., all struggled out of the gate and didn’t win immediately. They didn’t spend too long in Xfinity or Trucks, they spent just the right amount.

Two years is plenty of time to race (and dominate) in Xfinity. Just look at Cindric and Briscoe’s stats so far (five and six wins, respectively), and then look at the competition around them. It’s good, but not great.

Wouldn’t you want to put yourself up against the best and learn from them? After all, what else do you have to prove in Xfinity?

Even if Briscoe and Cindric were to wind up with lesser teams that don’t have the budgets of SHR or Penske, it’s still valuable seat time they’d benefit from in five or 10 years from now when they’re winning Cup races at a high clip.

The Xfinity Series is where names are made. Briscoe and Cindric have made their names — and then some — so now it’s time to make the jump up where the names speak for themselves.

With the cars changing in 2022, there may be some logic in delaying bringing drivers up for 2021. If Stewart Haas doesn’t bring back Clint Boyer and also doesn’t add Kyle Larson, then I can definitely see them adding Chase Briscoe. If sponsors will accept Kyle Larson, I jump at that if I’m SHR. If not Kyle Larson, I probably go with Boyer in the 14 for one more year and bring up Briscoe in 2022 if Larson is not an option in 2022, either. If SHR can make it worth GoFAS’s while to run Briscoe in 2021, that’d be an option. I’d be disappointed if Penske forces out DiBenedetto at WBR for Cindric after only one year.

With Ryan Newman having a year left at Roush Fenway (I believe), maybe it could be worked out in 2022 to have DiBenedetto move to RFR, put Cindric at WBR, and then have Briscoe in the 14 if no Larson or the 32 if Larson is at the 14. I think FRM has a good thing with Michael McDowell and John Hunter Nemechek. I wouldn’t want to see that messed with for 2021.

These wins don’t mean what they would have five years ago, when Cup drivers were more prevalent in the series.
I’m a fan of SHR and Briscoe, but I don’t think Briscoe is ready yet, at least up to this point in the season. He’s been outperformed by Cindric by a good margin, both in top organizations.
I’d say Chastain is just as ready as Briscoe. Chastain is the top Chevy driver this year, as far as consistently competing at the front the field, better than any of the JRM cars. I don’t think Kaulig has the speed of JRM, which is why he doesn’t have the wins yet.
Anyway, up to this point, I think Cindric is the only driver who has proven he’s ready for a promotion. But a lot can change between now and season’s end.