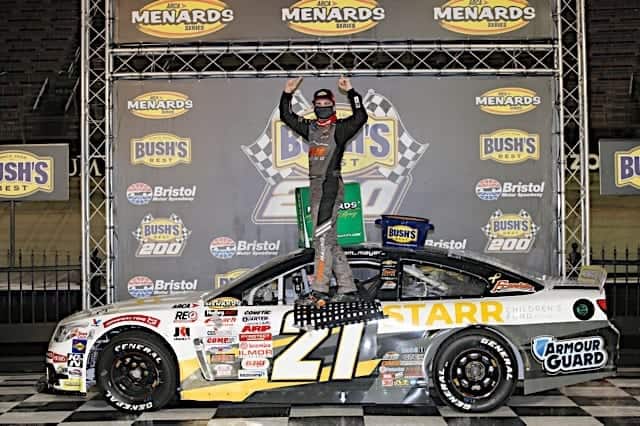 Mayer led the most laps en route to his fifth main ARCA win and his seventh combined win in the ARCA Menards Series East.

“Tonight has been awesome,” Mayer said post-race. “This GMS Racing team has been fast all night. The way we unloaded, we hardly did anything to it, just some trackbar stuff. That’s all we needed. It put us in victory lane.

After Mayer crossed the finish line in first place for his third straight ARCA win, his crew chief Mardy Lindley told him he became a great racecar driver.

“It hit me like a brick wall. I didn’t expect him to say that,” Mayer said. “This came after my JR Motorsports [announcement], which is huge. I think that’s why he said that. He knows I’m finally ready for it. Obviously, everyone believed in me. We proved it this weekend that we can do it. I love this momentum and we’re just going to keep it going.”

Mayer has dominated racing at Bristol. In addition to winning at Bristol twice tonight, he won both East races there last year, leading a combined 163 of those 300 laps.

“I don’t know, it just really suits me,” Mayer said about his dominance at Bristol. “Everyone at GMS Racing makes this so special. They know what they’re doing here and that helps me a lot, makes my life a lot easier.”

“All night, I felt like we were better than him,” Gibbs said. “These cars are high downforce, making them hard to pass. When you run behind people, you can’t really pass them in the dirty air.”

Gibbs was also frustrated with Nick Sanchez, who he claimed held him up for eight laps late in the race. Sanchez finished two laps down in 11th.

Max McLaughlin, Mason Diaz and Michael Self rounded out the top five.

Rookie Hailie Deegan finished sixth after being moved by Self late in the race.

She bested fellow full-time rookie Drew Dollar, who finished 18th due to a DNF.

Dollar exacted his revenge on Parker Retzlaff after the two made contact in the previous race at Toledo Speedway.

After finishing sixth in the Truck race earlier, Chandler Smith suffered setbacks once the green flag flew in the race. Something broke on his No. 20 Venturini Motorsports Toyota, and the swaybar made his racecar difficult to drive.

Finally, on lap 71, his rough race ended after Smith slammed into the wall, ultimately resulting in a DNF.

There were a multitude of cautions in this 200-lap race, with only nine of the 26 drivers finishing on the lead lap.

Unofficially, after the 16th race of the season, Self leads Holmes by one point in the championship standings. Deegan is 49 points behind, more than a full race worth of points. Dollar sits 74 markers behind in fourth place.

ARCA has a quick turnaround for its next race, as it will race in the Toyota 200 at Winchester Speedway in two days (Saturday, Sept. 19).

IMO ARCA did a marginal job running this race.
Some unnecessary cautions for cars that spun and kept going. But when it came for a necessary caution for debris, non was displayed until it almost took out the leader. I understand no one likes back to back cautions but you can’t ignore legitimate cautions.
The officials should not have let Chandler Smith back on the track until the crew fixed the broker sway bar. We all new it was going to cause a wreck sooner or later. It did.
Also Drew Dollar should of been penalized for intentionally wrecking Parker Retzlaff. It’s becoming a habit with Drew.