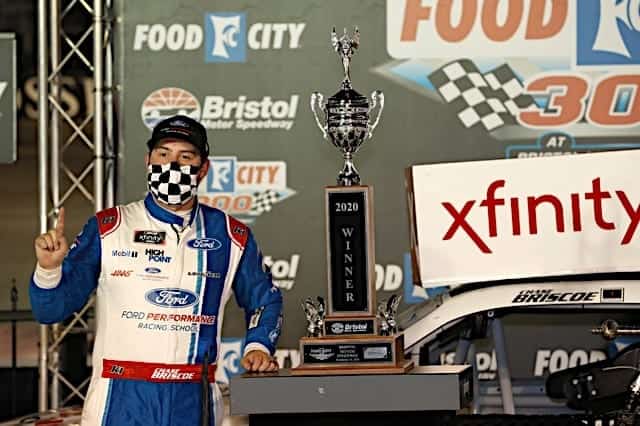 With the NASCAR Xfinity Series playoff field essentially set, the regular season finale at Bristol Motor Speedway ended up focusing on a three-way battle for the Food City 300 win, with Chase Briscoe coming out on top.

Friday (Sept. 18) night’s 300-lap showdown at the half-mile track featured a frenetic, back-and-forth fight between Briscoe, Austin Cindric and Ross Chastain for the victory during the final green-flag run.

Early dominance from Justin Allgaier, less than a week removed from his sweep of Richmond’s doubleheader, gave way to Chastain’s No. 10 car. Chastain led the second-most laps – 117 to Allgaier’s 126 – and was managing to stay out of the reach of Cindric and Briscoe out front.

However, a late caution bunched up the field, which allowed Cindric to clear Chastain for the lead after the restart before Briscoe scooted by as well. Sitting in second, Briscoe then set his sights on Cindric, ran him down and took the lead from the No. 22 with six laps left, with Cindric falling behind Chastain to finish third.

Harrison Burton and Allgaier rounded out the top five.

Briscoe led just 11 laps, but the final six were the ones that mattered. After disposing of Cindric for the lead, Briscoe set sail and won the race by more than half a second over Chastain. The No. 98 was once again sporting the Ford Performance Racing School scheme, designed to pay tribute to Ford pioneer Carroll Shelby, a livery that Briscoe has won in three times this season.

Allgaier seemed set to continue his hot streak from Richmond, leading the most laps and sweeping the opening two stages, but brushed the wall in lapped traffic and his car overall faded as the night went on.

Brandon Brown needed either a repeat winner or a first-time winner already inside the top 12 to retain his playoff spot, and Brown got his wish. No driver who could have leapfrogged him finished above 11th, and Brown secured his spot in the playoffs with a 12th-place effort.

Myatt Snider didn’t have a good pair of dates with Richmond, and his flight at Bristol barely got off the ground. His No. 93 Chevrolet lasted just 31 laps before the engine expired.

Justin Haley finished in the top 10 in both of Richmond’s races last week but had an early unscheduled stop while running fifth, suffering a flat tire. He finished 16th.

Haley’s Kaulig Racing teammate Chastain bridges both the good and bad, as the second-place run was a much-needed confidence booster for the No. 10 team heading into the postseason. However, Chastain just can’t seem to close out a win in the Xfinity Series this year.

Chastain reeled off 11 straight top-10 finishes between the June race at Atlanta and the August race at Road America, a streak of two months and two days, and Bristol marked his fifth second-place effort of 2020. The frustration continues, though, after a battle with Denny Hamlin at Darlington two weeks ago left Chastain empty-handed after coming extremely close to a win.

Two red flag stoppages marred the night, kicked off by an incredibly hard crash in the opening stage.

B.J. McLeod and Vinnie Miller were both taken out in a violent lap 61 crash that was, appropriately, “ugly.” McLeod came down on JD Motorsports teammate Jeffrey Earnhardt just a little bit exiting turn 2 and his No. 6 went straight into the outside wall, slamming it broadside.

The chaos wasn’t over quite yet, though, as McLeod slid back across the track and was slammed on the driver’s side by Miller, who was driving the McLeod-owned No. 99. The latter impact concluded a very rough half lap for two teams, and resulted in the first of the two stoppages (one that only lasted a little over a minute).

Michael Annett was the cause of the second, as he also broadsided the wall on lap 122. Joe Graf Jr. and Brandon Jones were also involved, but Annett’s Chevrolet dumped oil on the track and caused the second red flag for cleanup.

Alfredo seems forever cursed to nearly always finish sixth when he has a top-10 effort, but he tops the list. Driving Richard Childress Racing’s No. 21 part-time this year, Bristol marked his seventh top-10 and fifth sixth-place finish in 2020. Alfredo was mired back early as most of the field began to get lapped by the leaders, but managed to score stage points in the second segment and ended up just short of a top five.

As he has so many times this season, Hill is set for triple duty at Bristol. After finishing 20th in the Gander RV & Outdoors Truck Series event on Thursday night (Sept. 17), Hill finished 15th in the Friday night race and rolls off 38th for the Cup Series’ Bass Pro Shops NRA Night Race.

Josh Bilicki is the only double-duty effort of the weekend, but the Xfinity Series was the exclusion from his schedule.

“…Man, what a race! …I was so mad after last week and I told all the guys, ‘there ain’t no way we’re getting beat today.’ I was so mad after how we ran last week and I get on the Internet all the time and see guys counting us out after one bad race. I know what this team’s capable of … I finished second here the last few races, I’ve wanted to win here so bad. It’s awesome that I can actually celebrate with all these race fans.” – Chase Briscoe

Briscoe and Cindric still sit atop the playoff standings as the postseason begins next week, tied at 2,050 points. Briscoe leads in victories, but Cindric claimed the regular-season championship last week at Richmond.

Allgaier sits 17 points back, with Gragson, Jones, Haley and Burton all within 20 points of the No. 7. All of the top seven drivers make up the series-regular race winners this season.

Chastain, Sieg, Annett, Herbst and Brown round out the 12 playoff contenders.

The first round consists of Las Vegas Motor Speedway, Talladega Superspeedway and the Charlotte Motor Speedway ROVAL. Briscoe and Haley are the defending winners at the former two tracks, while AJ Allmendinger scored the win at the ROVAL last fall.

Despite Allgaier’s back-to-back sweep effort last week at Richmond Raceway, Briscoe heads into the playoffs with all the momentum. He will have main competition from Cindric and Allgaier for the series title, but Briscoe closed out the regular season on nearly the highest possible note and should carry that into Las Vegas.

As the opening round of the playoffs gets underway, the Xfinity Series heads across the country to Las Vegas Motor Speedway, where Briscoe won in the spring. The Alsco 300 is set to get underway at 7:30 p.m. ET on Saturday, Sept. 26 on NBCSN.