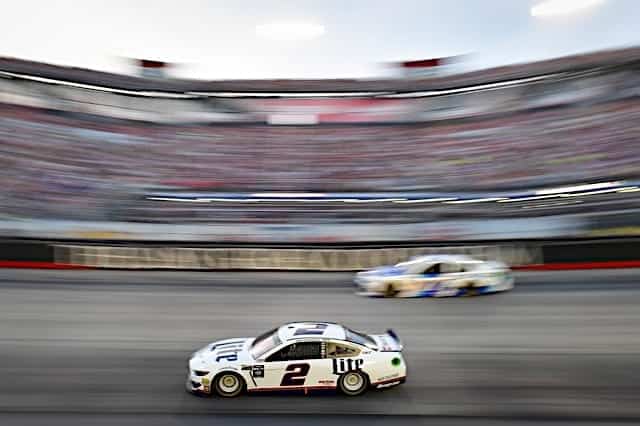 The playoff field will be slimmed down from 16 drivers to 12 after 500 laps at Bristol Motor Speedway on Saturday night (Sept. 19th). Last week at Richmond, Brad Keselowski made a statement by leading 192 laps and winning the race. Three drivers have locked themselves into the round of 12: Kevin Harvick, Denny Hamlin and Keselowski. Who will be the other nine drivers advancing to the round of 12?

William Byron, Cole Custer, Matt DiBenedetto and Ryan Blaney all sit below the cutoff line. These drivers have had some success at Bristol. Bryon finished 8th in the spring Bristol race. Custer finished in the top 10 in four of his six Xfinity starts. DiBenedetto won the final spot from the Open for the 2020 All-Star Race. Blaney had led over 60 laps in the last four of the five races at Bristol.

Here are a few drivers to keep an eye on when setting your daily NASCAR FanDuel roster for the race this Saturday.

What a difference a week makes for the No. 2 team. Brad Keselowski has set himself up to be the driver to beat. Last weekend’s race at Richmond proved that Keselowski runs well with the 750-horsepower package. Team Penske has been a force at tracks like Phoenix, Loudon and Richmond. Keselowski has some recent success at Bristol with a third and a first in the last two races. In the spring Bristol race, Keselowski put himself in a position to lead the final three laps after leaders Joey Logano and Chase Elliott wrecked. Keselowski will start from the pole for the night Bristol race.

Hey now, All-Star winner Chase Elliott wants redemption for what happened in the spring race. While racing with Logano, Elliott made contact with the No. 22 while going for the lead and finished 22nd. Bristol is one of Elliott’s best tracks, holding the best average finishing position among active drivers with at least two starts. Elliott won the one and only All-Star race at Bristol for a millon dollars. With Bristol being one of his better tracks, Elliott escaped one of his least favorite tracks in the playoffs with a fifth-place finish last week at Richmond. Even though Elliott was happy to take the $1 million, he would be happier to secure a spot in the round of 12 from the sixth starting position.

2020 has not been a Jimmie Johnson year. His sendoff season has been rough, exemplified especially last week at Richmond after Johnson hit the wall early in the race and finished 31st. He should get a breath of fresh air at Bristol, where he scored his best finish this season with a third in the spring race. Johnson has finished in the top 10 in eight of the last 12 Bristol races. Johnson will come from deep in the field from the 24th position.

Christopher Bell looks to ring in the best finish by a non-playoff driver at Bristol. In this race one year ago, the No. 95 team finished runner-up with Matt DiBenedetto. Even though this is his just second start at Bristol, Bell finished ninth in his first Bristol Cup race this spring. Bell has had some success at Bristol with a win in the Xfinity spring race in 2019. Bell has been showing some first-year struggles but has shown great potential as he will roll off from the 18th position.

Michael McDowell’s season has not been flashy but productive, improving his average finishing position by four spots compared to last year. One shining spot for the No. 34 team this season came at Bristol, where McDowell earned a career-best Bristol finish of 14th. McDowell’s stats can be deceiving as his average finishing position has been affected by four start-and-park efforts. Heads up this season with his teammate, McDowell has outperformed rookie John Hunter Nemechek by three spots. McDowell will start in the 26th position.