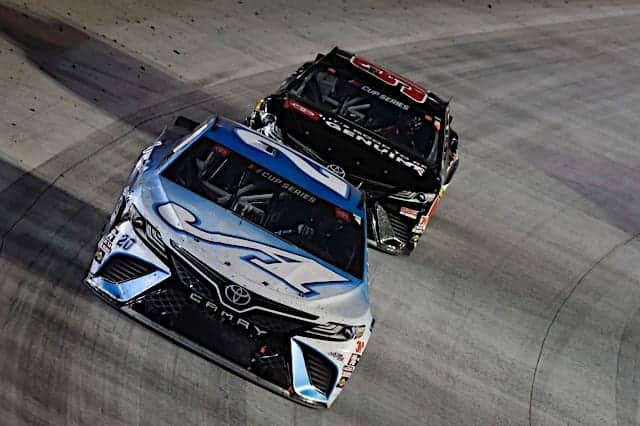 The 24-year-old was presented a tall order before the race even started when his No. 20 team failed pre-race inspection twice, sending him to the rear of the field along with teammates Kyle Busch and Denny Hamlin.

Jones would work his way up to 16th by the end of stage one, battling tightness in the corners according to team radio.

A late caution in stage two allowed Jones to crack the top 10 on the restart, and the Byron, Michigan native would round out the stage in the ninth position.

Jones would hold steady for most of the final stage, remaining in the top 10. A late caution and restart propelled Jones forward some more, and with less than 75 laps to go the fourth-year driver found himself in third.

While leaders Kevin Harvick and Kyle Busch fought for the lead, Jones slowly began to close in but came up just short of catching the leaders to finish the race with a strong third. Despite missing the playoffs, Jones now has two top fives in the past three races.

“It was, I guess, a solid day. I felt like we had a good car out there in the end.”, Jones stated after the race. “We had to start in the back and that took a while to work through there and get some track position. It’s pretty challenging to pass here even though it’s a short track. A good run.

“The Auto-Owners Camry got better all night, and honestly, the last run of the race was our best. We got up there into third and I kind of knew I couldn’t beat those guys straight up. So, I tried to stay a little bit on the front half of the run and run at the end hard and just kind of ran out of time. I had just got to those guys when I took the checkered, so a good day.

“It was nice to be up there in contention at the end, but close again at Bristol. Especially in this race. We’ve been close a few times, just want to close one out here soon.”

The strong finish will certainly boost some confidence for the young driver, who still sits as a free agent for the time being. It’s no question the talented driver is a top target among teams for looking for someone to step in, and some more momentum could very well land Jones in a favorable spot.