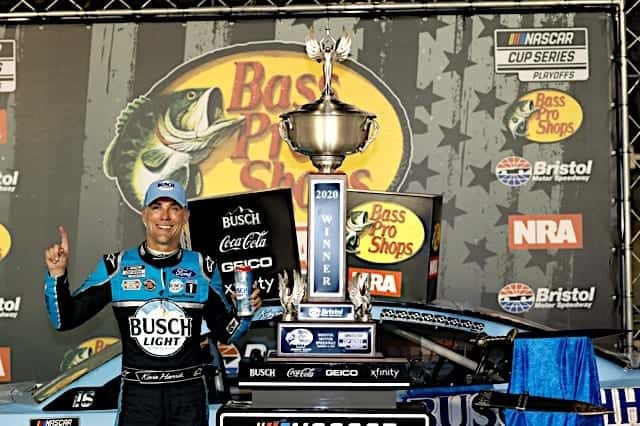 Kyle Busch did pretty much everything that he needed to do in order to get back into victory lane on Saturday night at Bristol Motor Speedway in the Bass Pro Shops / NRA Night Race. He raced from the rear of the field to second by the end of stage one. He then went on to dominate the second stage for his second stage win of 2020. Busch led 159 laps on the night and was out front with 37 laps to go.

The trouble was, Kevin Harvick had something to say about it.

Battling for the lead with Busch amongst lapped cars, Harvick, taking advantage of Busch’s momentum being slowed by Joey Logano with 31 laps ago, used it to inch away. He had just enough to hold off the No. 18 as Harvick bagged his ninth win of the season. It’s Harvick’s second win in three races after also winning the Southern 500.

“We didn’t have anything to lose. We were here to win a race. I know how much (crew chief) Rodney (Childers) really enjoys coming to this place,” Harvick said.

The checkered flag also set the Round of 12 for the playoffs as Matt DiBenedetto, Cole Custer, Ryan Blaney and William Byron failed to advance.

Let the Round of 12 begin. Ryan Blaney, Cole Custer, William Byron and Matt DiBenedetto have been eliminated.

Byron was in place to advance to the Round of 12 as the race approached its halfway point. But when the No. 51 car of Joey Gase appeared to check up,  Byron got into the rear of Christopher Bell, damaging Byron’s No. 24 machine enough to end his night.

Busch started from the rear of the field after he and Joe Gibbs Racing teammates Denny Hamlin and Erik Jones failed pre-race inspection twice. Busch moved up quickly, rising to second by the end of the first stage, won by Chase Elliott.

Busch got the lead in the pits and didn’t relinquish it, leading all but one lap until 30 laps into the final stage.

In a pure illustration of the night, it was Harvick who took the top spot – the two drivers combined to lead a combined 381 laps in a race in which the caution flag flew three times for on-track incidents. The final of those was with 94 laps left when James Davison and Austin Dillon got together trying to avoid Harvick pitting during green-flag pit stops.

That lack of cautions played a role in the final outcome. Just six drivers finished on the lead lap, resulting in a higher number of lap cars for the leaders to navigate.

“We just didn’t have enough there in the end. The guys gave me a really good piece (Saturday),” Busch said. “Lapped cars were definitely a problem, but it’s part of racing, you have to get around them.”

The NASCAR Cup Series returns on Sept. 27 in the South Point 400 at Las Vegas Motor Speedway at 7 p.m. on NBCSN.