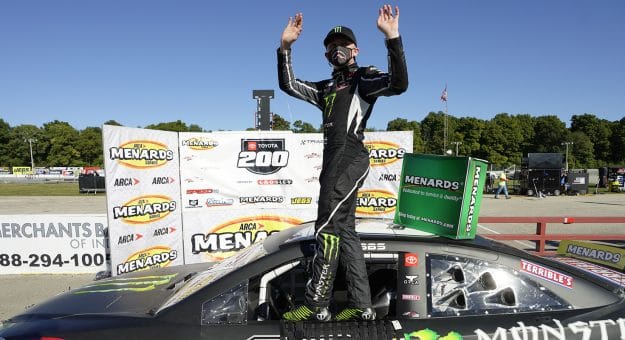 Ty Gibbs snagged the pole position just before the end of qualifying for Saturday’s (Sept. 19) ARCA Menards Series Toyota 200 at Winchester Speedway, and nobody was able to knock him off that perch on the way to his sixth overall win of the season.

Chances were there for other front-runners such as Michael Self and Bret Holmes to take the lead, whether it was the green flag or restarts coming off on-track cautions or race breaks. Gibbs, however, was too strong, powering to the win at the half-mile, high-banked facility.

“It was a fun time, I’m just trying to get as much experience as I can,” Gibbs said. “It’s a dream come true to win here, it’s a really cool track with a lot of history.”

It was a good rebound for Self, who was in a min-slump of sorts, having finished outside the top four in the past four races. That ended on Saturday as he spent the race solidly in the second-place position. More importantly, he extended his lead in the points standings by three points in front of Holmes.

“It’s no secret that we’ve struggled pretty bad recently,” Self said. “These guys have been working pretty hard, and it showed.”

Jesse Love and Taylor Gray rounded out the top five.

It was a forgetful afternoon for Hailie Deegan. After spinning on the 61st lap with an apparent tire going down and falling two laps down, she got into the wall again with just under 90 laps to go, pancaking the right side of her car into the wall, ending her day.

The ARCA Menards Series returns on Sept. 26 at Memphis International Speedway in the Sioux Chief PowerPEX 200 at 7 p.m. on MAVTV.

I’m confused about the ARCA CHAMPIONSHIP. How many championships are there? East, West, Sioux Chief, Short Track, Big Track and ARCA MENARDS SERIES.