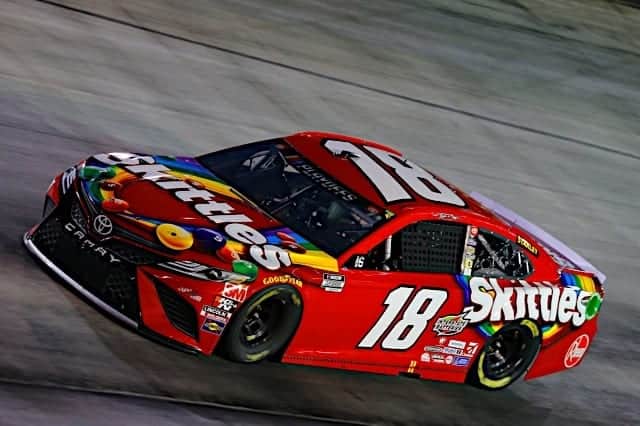 There’s the Daytona 500, Coca-Cola 400, Southern 500, Brickyard 400, but there’s just something about the Bristol Night Race that makes it stand out.

Close racing, fenders banging, tempers flaring, Bristol has had it all. This year, though, the NASCAR Cup Series race was lackluster with only six drivers finishing on the lead lap, though it had a solid finish between two Cup champions.

Regardless of the outcome, 1,000 laps were turned around the famed half-mile short track across the top three national touring series over the past three days and we’ve got some stats to show it.

Whenever Kyle Busch competes at Bristol, he’s going to be a factor. With his eight Cup victories at the track, you could probably put him in a boat and he’d still be competitive at The Last Great Colosseum.

But what’s rare is for Busch to not have a victory 28 races into the season. In fact, prior to this year, it’s never happened (the longest he’d ever gone is 25 races in his rookie season, 2005). And he came into the Bass Pro Shops Night Race less than 20 points above the cutline, having to start at the rear of the field for failing technical inspection.

Busch rocketed to the front, finishing second in the opening stage before dominating and winning the second stage. Over the final half of the race, the No. 18 car and Kevin Harvick nearly lapped the field.

After catching Harvick in lapped traffic, Busch was able to pass the No. 4 car for the lead with 51 laps to go. But 10 laps later, Harvick repaid the favor, passing the No. 18 in lapped traffic when Busch struggled to get around Joey Logano, to put the No. 22 Ford a second lap down.

Over the final 40 laps, Busch remained on the rear bumper of Harvick, though not able to get by, extending his winless streak to 29 races, dating back to last year’s championship race at Homestead-Miami Speedway. The margin of victory: .310 seconds.

Busch did, however, lead a season-high 159 laps.

On Logano: "He's nobody's friend for a reason."

On the "dipshit kids" who got in the way tonight: "Nothing like a Gase and a Smithley."

On what's next: "We'll be eliminated next round."

The No. 18 teams heads to Las Vegas Motor Speedway next weekend seeded 10th in the Round of 12. After Bristol, Busch sarcastically said he will be eliminated from the playoffs following the next round.

Following 300 laps at Bristol, the 12-driver playoff field is set for the NASCAR Xfinity Series, with the postseason beginning next weekend at Las Vegas Motor Speedway. While most of the championship favorites visited victory lane multiple times during the regular season, one did not: Ross Chastain.

After making the Championship 4 in the Gander RV & Outdoors Truck Series last season with Niece Motorsports, Chastain returned to Xfinity full time, this go around with Kaulig Racing. The first 26 events of the season have seen Kaulig step up from its previous four years of existence, winning three times, twice with Justin Haley.

Meanwhile, Chastain has been the most consistent driver across the board in team history, no doubt. In the regular season, he led 460 laps, including a season-high 117 on Friday (Sept. 18) at Bristol. He’s scored 13 top-five finishes in the No. 10 car – the organization had 10 as a company through its first four seasons – and a series-high 23 top-10 efforts.

After climbing out of the cockpit on Friday, Chastain showed a ton of emotion, finishing runner-up for the fifth time this season. Disappointed, sure, but not out.

Chastain enters the playoffs as the eighth seed, finishing third in the regular season points battle after winning just two stages. Put money down on the No. 10 team making it to Championship 4 because consistency is key in the opening two rounds. Come the championship race at Phoenix Raceway, he’ll need to win.

The Truck Series playoffs kicked off at Bristol … and was mostly dominated by 2018 champion Brett Moffitt. That was until his 17-year-old GMS Racing teammate Sam Mayer got by with 30 laps to go en route to the victory.

A 17-year-old winning a national touring race? Yup. Mayer isn’t the youngest driver in series history to win, though, as that title belongs to Cole Custer, who won at New Hampshire Motor Speedway in 2014 at the ripe age of 16.

On Thursday, @sam_mayer_ became the second-youngest driver to win in the @NASCAR_Trucks Series at 17 years, 2 months and 23 days.@ColeCuster remains the youngest winner in Gander Trucks history (16 years, 7 months and 28 days) after grabbing the ? at @NHMS in 2014. pic.twitter.com/fXVq1TlhNt

The difference is, many drivers didn’t find it a surprise to see Mayer win just seven starts into his Truck career. When I asked Moffitt post-race if he was surprised of the victory he said no, and reflected back to the end of August when Mayer led 24 laps at Gateway before crossing the finish line in fourth. On paper, though, Mayer’s average finish in his first six starts was 17.6.

Later that night, Mayer went on to lead a race-high 116 laps in the ARCA Menards Series race at the World’s Fastest Half-Mile, sweeping the night. In 18 ARCA starts this season between East, West and traditional ARCA, the Wisconsin native has 10 victories. Quite impressive.

So impressive that earlier in the week, JR Motorsports announced Mayer would return to the team (having previously run in the team’s late model program) once he turns 18 next June to compete in the second half of the Xfinity season. The plan is to then run the full 2022 season with JRM.

Quite the week for Mayer.