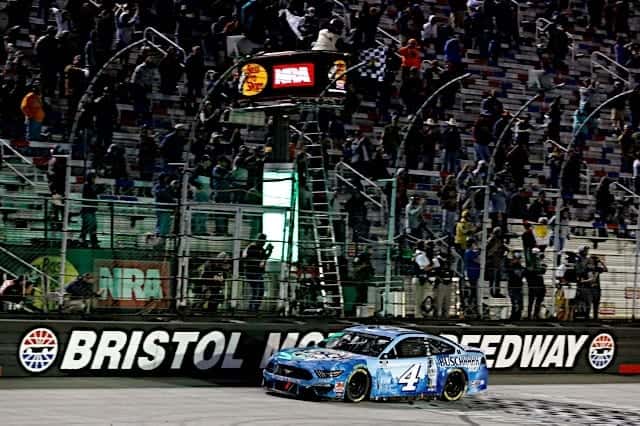 Who… should you be talking about after the Bass Pro Shops NRA Night Race?

Kevin Harvick snagged his ninth NASCAR Cup Series victory of the season at Bristol Motor Speedway, but it didn’t come easy.  He absolutely earned the spoils, coming out on top of a great battle with Kyle Busch for the last 50 laps. The pair had to contend with lapped traffic, including some of the top cars in the series, on the way to the Bass Pro Shops NRA Night Race checkered flag.

Joey Logano held up a charging Busch as fellow Ford driver Harvick was able to fight his way by. It then looked like Busch’s teammate Denny Hamlin would return the favor. But having already clinched entry to the next round, Hamlin moved over and allowed Harvick to pass instead of holding him up to help Busch.  That allowed Harvick to hang on to the checkers and set a new career high for wins in a season.

The best of the non-playoff drivers was also one who’s looking for a ride in 2021. Erik Jones put on a show,  slicing his way to a third-place result. He was one of just six drivers to claim a lead-lap finish after a late incident during a round of green-flag pit stops trapped most of the field a lap or more in arrears.  Jones made the most of his good fortune, tying his best finish of 2020 and grabbing his second top five in the last three races.

Jones might have been the best of the rest Saturday night, but it was refreshing to see some different and non-playoff faces in the top 10. Rookie Tyler Reddick wasn’t exactly a surprise in fourth. However, Chris Buescher (eighth), Ryan Preece (ninth) and Michael McDowell (10th) made unexpected appearances. They used late strategy to their advantage to beat some of the usual contenders at their own game.

NASCAR needs a variety of drivers scoring good finishes. While it’s true that not every driver is capable of winning any given week, the illusion that they can is vital. This week gave fans a glimpse of something unpredictable and that’s always a welcome sight.

Polesitter and spring Bristol winner Brad Keselowski looked solid early, leading 82 laps and mixing it up with the other playoff drivers. But his luck changed mid-race when the power steering on the No. 2 went south. From there, the night didn’t get better, winding up inside the garage for repairs. In the end, Keselowski finished a disappointing 34th, lowest among cars still running. The silver lining is that he already assured a place in the next round of the playoffs via his win at Richmond Raceway, which takes the sting out a bit.

All-Star Race winner Chase Elliott looked like a Bristol repeat might be in the cards when he won the first stage. But Elliott found himself in a pickle late, when he was trapped off the lead lap as the caution flew in the middle of the last pit cycle once Austin Dillon clashed with the No. 53 of James Davison. Elliott got a lap back with the wavearound and made the most of it, finishing seventh. He was the first driver a lap off the pace, but the incident kept him from advancing further in the race.

Jimmie Johnson, in his final Bristol event, got off to a rocky start after a tangle with Ricky Stenhouse Jr. that left the JTG Daugherty Racing Chevrolet the first car out. After that, he rebounded, running inside the top 10 late until getting bitten by the caution flying after his final pit stop. Johnson had to settle for 17th.

Active Bristol win leader Kyle Busch remains winless in 2020. But this week, it wasn’t for lack of speed. Busch had to start at the back of the field after failing pre-race inspection twice, yet charged to second by the time stage one ended. He won stage two before falling just short of his first win. Instead, he ran second, earning his third runner-up result of the year. Busch had some harsh words for laps-down drivers after the race and predicted he won’t make the next round of this year’s playoffs.

When… was the moment of truth in the Bass Pro Shops NRA Night Race?

He could have held up his fiercest title rival on Saturday night, and helped his teammate win to boot.  Instead, Hamlin gave the leaders plenty of room to duke it out between themselves. The No. 11 Toyota driver pulled out of the preferred racing groove and let the leaders race by. For Kyle Busch and his fans, it must have seemed like quite a slight. Hamlin could have taken Harvick’s line away as Logano had taken away Busch’s, and that would likely have given his teammate the win.

It could prove to be a smart move on Hamlin’s part. Whether he moved over out of respect to Harvick or for some other reason, it could mean Harvick giving Hamlin a little slack sometime in the coming weeks as the two continue to be title favorites. Setting up Harvick to win the race might help set Hamlin up to win the championship.

It would be wrong for NASCAR to change the game now. However, the current way of determining the starting lineup is junk and never should have happened in the first place. It’s little better than a random draw because of one huge, glaring mistake: favoritism shown to playoff drivers. Prior to the postseason, it worked OK, rewarding a solid finish the previous week without overemphasizing it.

Consider Jones and his third-place run. That should net him a good start at Las Vegas Motor Speedway next Sunday. Instead, he’ll start no better than 13th. What that means is non-playoff drivers will struggle to overcome their starting positions while those in title contention enjoy an advantage they didn’t entirely earn.

Without qualifying, where anything can happen and playoff drivers didn’t necessarily start up front, there was a better, and easier, option. The lineups should have been set simply by using each driver’s fastest lap in the previous race as a qualifying lap.  Done, fair, and no math involved. By comparison, the current system is an example of overthinking at its finest.

How… does the playoff picture look heading into the Round of 12?

Thanks to the points reset, being below the cutline currently doesn’t mean much as NASCAR heads to the 1.5-mile in Las Vegas this weekend. But with Talladega Superspeedway already looming large, and the also unpredictable Charlotte Motor Speedway ROVAL after that, things are going to get real fast.

Aric Almirola, Kyle Busch, Clint Bowyer and Kurt Busch are the drivers currently in the center of the storm. That said, just 21 points separate fourth from 12th place after the points reset. A win in Nevada would mean that neither Talladega nor the ROVAL matter nearly as much. It’ll be tough, though as the bottom four have just one LVMS victory among them.

Keselowski’s three wins in Sin City are most among the contenders. Harvick, Logano and Martin Truex Jr. have a pair apiece while the rest of the wins belong to drivers outside the playoff picture. This week is the race where drivers have the most control over their own destiny in the Round of 12, and they will certainly be trying to take advantage of that on Sunday night.

“The current system is an example of overthinking at its finest.”

No it’s not. It’s NA$CAR’s way of keeping the chosen ones up front from the beginning of the event.

ha, no overthinking on NASCAR’s part. I agree that the whole point is to keep the “playoff” drivers up front.

There were 32 TV time out yellow flag laps. At almost 4 laps per minute that’s about 125 laps of green flag running. Having that many more laps at the end would have made the ending a lot more interesting, especially if the 38 or one of the other fill-the-field cars had spun out on his own AGAIN near the end.