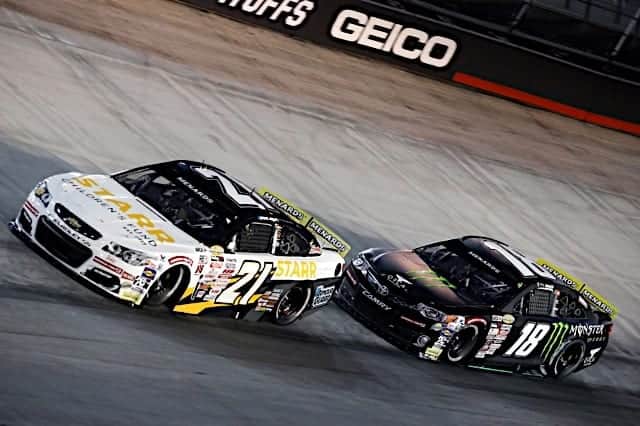 And then there were two.

Sam Mayer proved Thursday night (Sept. 17) that he means business — and at the perfect time, to boot. Mayer dominated the ARCA Menards Series’ return to Bristol Motor Speedway, leading 116 laps en route to his fifth victory of 2020 despite Ty Gibbs was nipping at his tail the entire night.

As ARCA heads 492 miles west to Memphis International Raceway for the ARCA Menards Series Sioux Chief Showdown finale, there is a six-point gap between the two.

Chandler Smith‘s second-half woes continued as he finished 23rd after a sway bar issue. The worst finish of his ARCA career officially eliminated him from contention; Smith led a majority of the 2020 SCS campaign but will come up short of earning the title.

Michael Self moved into third, while Bret Holmes remains in hot pursuit. These two won’t battle it out for the SCS championship, but once the checkered flag falls on Saturday, the spotlight is on them and the final races of the 2020 season as the two battle for their first ARCA championship.

The race at Bristol was the second to be run in conjunction with the main ARCA series, making up for the April 4 event that was postponed due to COVID-19. Mayer currently holds the East lead by 26 points over Gibbs. Save for the first race at Toledo Speedway, Mayer has won every ARCA East event in 2020, and with only one event remaining, Mayer will go back-to-back as the champion.

East will run its season finale on Oct. 10 at Five Flags Speedway.

ARCA Menards Series West Standouts: There were zero representatives from the West in Saturday’s event.

West is slated to return to action on Sept. 26 at the Bullring at Las Vegas Motor Speedway.

What’s Next?: It all comes down to this. The first of four championships in 2020 will be handed out Sept. 26 in Memphis. Saturday’s race will mark ARCA’s return to Memphis for the first time since 2001. After being an East track, Memphis was upgraded to ARCA in 2020 and will host the inaugural Sioux Chief Showdown championship race.

The Sioux Chief PowerPEX 200 will be shown live on MAVTV and will be streamed live on NBC Sports Gold.