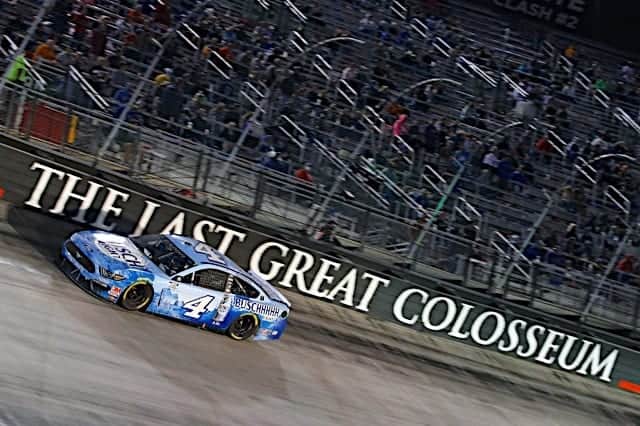 It’s that time of year again. Overnight, four NASCAR Cup Series drivers were eliminated from the Round of 16 championship-eligible drivers down to the Round of 12. Somehow the indifferent old sun did what it always does and went ahead and rose Sunday morning.

My guess is that it will do so again as the NASCAR field is trimmed first to eight drivers, then further down the road to four flying mother nature’s silver seed to a new home in the sun. (OK, that last part is somewhat unlikely.)

As hard as it is to believe, NASCAR’s playoff-style method of choosing a champion (which to date hasn’t included a swimsuit competition) has been with us since 2004.

Why did they go ahead and stir up a simmering pot that had been working just fine for decades? Cynics originally called it the Matt Kenseth rule; in 2003 Kenseth won just one race, and the race he won was just three races deep into NASCAR’s bloated season. That same year, Ryan Newman won eight races (22% of them). Jimmie Johnson finished second in the standings in 2003, followed by Dale Earnhardt Jr. Poor Newman could manage no better than sixth in the final rundown despite all those wins that made him the poster child of NASCAR.

To correct this issue, NASCAR immediately overhauled the old Latford points system and wrote a new rule that stated whichever driver won the most races in the season was the sport’s champion, right? With ties broken by whichever driver sold the most t-shirts in the parking lot. Nope. That didn’t happen.

For one thing, our vanquished ex-pal Brian France didn’t go to a lot of races, and when he did attend one he typically hauled his ass back to the corporate jet and left before the halfway point of the event, so how would he know who won? I mean, there was MRN and whatnot, but it’s tough to pay attention when you’re singing “Day-O” at the top of your lungs with a boat drink held aloft in each hand on the flight home.

France and NASCAR were after bigger game. Every year NASCAR did pretty well in the ratings and new fans were showing up in record numbers back in the early 2000s. But then every fall the NFL season would start and the World Series began, at which point interest in NASCAR went into a tailspin. The playoffs, originally dubbed the Chase for the Championship, were NASCAR’s quixotic attempt to compete against the NFL for the hearts, minds and wallets of we the people. As it stands written in the Book of Bruce, “Poor man wants to be rich, rich man wanna be king and the king ain’t satisfied until he rules over everything.”

The strategy didn’t work. And it ain’t ever going to. Fact is, the ratings for the first week of this year’s NFL season for the Tampa Bay Buccaneers/New Orleans Saints game came in at a 13.2 Nielsen rating with over 25 million viewers. NASCAR’s ratings? Despite being broadcast on Saturday night to avoid head to head competition with football, NASCAR managed just a 1.05 rating and 1.738 million viewers.

Despite it all, NASCAR packed up its flying circus and headed off first to Bristol Motor Speedway and this week onto Las Vegas Motor Speedway to kick off the Round of 12 to a largely indifferent audience.

(For the record, no fans will be allowed at the Vegas, race despite the fact what happens in Vegas supposedly stays in Vegas. And apparently, what happens in the whole rest of the world stays in the whole rest of the world. I was struggling to be believe that Vegas track President Chris Powell was even petitioning to be allowed to have fans in the stands this weekend amid a COVID-19 flare-up that had sickened over 1,000 workers in two casinos in Sin City.)

But somehow, between so-called boring Richmond and problematic Vegas, NASCAR managed to stage a barnburner of a race, a truly outstanding race last Saturday night, one that earned (to date) 78% approval from the fans who voted in Jeff Gluck’s weekly “Was It a Good Race” poll. Hell, if Joe Biden or President Donald Trump could get that sort of approval rating, we could call the whole election off and coronate our next president right now.

How’d that happen? Call it a perfect storm. The sort of perfect storm that turns a three-hour tour into becoming castaways on an uncharted desert isle for years.

Look at the two drivers involved in the classic duel at Bristol. Kevin Harvick didn’t have to worry about points — not stage points, not race points, not bonus points, none of them. His win at Darlington punched Harvick’s golden ticket into the next round. He was advancing whether he wrecked the car on the pace laps or if he won, which, in fact, he did.

In the opposite corner in the gaudy red and Skittles colors, unable to complete a sentence without a grotesque profanity and meaner than a rattlesnake with an impacted molar, we find reigning champion Kyle Busch.

If you haven’t gotten the news yet, it’s been 29 races since Busch last won a Cup event, and he’s less than pleased by that turn of events. He’s pretty vocal right now about the fact he doesn’t give a damn about points or championships — he just wants to win another race. In fact, after finishing second (by less than a third of a second), Busch went on to predict that he’d be eliminated in the next round.

Those who follow the sport know Busch is not a paragon of humility, so implicit in that statement is, “And I don’t give a damn. I just want to win some races.”

Busch is quite concerned that this deep into the season, his streak of at least one win for 15 seasons is on the line. Maybe he thinks he won’t be around another 16 years to match it. I’m damn near twice as old as Busch and I ain’t getting measured for a suit that zips up the back anytime soon.

So again, it was a perfect storm. Two drivers unconcerned about points who didn’t have to win the race but wanted to anyway. It seems that most drivers in the playoffs have adopted a mindset that; a top 10 would be fine, and a top five would be nicer. But taking any type of risk that potentially could lead to a DNF isn’t even an option on the table. Which is the sort of thinking that turns races into parades and allows for the first caution-free race at a NASCAR short track since the earth was cooling.

Harvick’s driving and mindset this year remind me of David Pearson. At the height of his career, Pearson was a Ford factory team driver. The team didn’t compete in every Cup race; it only went to the big ones. And when it went to a race, it typically won them or at least finished second to Richard Petty. Why? Pearson wasn’t competing for titles, though he won championships in 1968 and ’69. He also won 16 races in ’68 and 11 in ’69.

So why cut back to a part-time schedule? The big races grabbed all the headlines. Win the Southern 500, the World 600 or even the Rebel 400 or a race of that stature and a picture of your car appeared on page three of the sports section of newspapers across the Southeast that Monday. Occasionally those races and your pretty mug would even show up on Wide World of Sports, though usually weeks after the race.

Back in the page three days, there normally wasn’t a whole lot of talk about the title even late in the season. Every race was a unique event unto itself to be savored and enjoyed on its own merits. Imagine that being the same mindset these days, especially among the people tasked with broadcasting the event.

Typically, life holds that a process that takes too long to explain won’t work out well in real life. So you see, starting with the first race in February (and hitching your coach to a wagon train that runs until November, weather and viruses permitting), every driver who wins a race is automatically in the playoffs. In addition to race points, they gets bonus points. Oh, and at indeterminate times during the races we picked in advance, there are what we call stages, and drivers can get stage points, too. There are usually three stages during the race, but that last one doesn’t count, because that’s the one that pays race points. Sometimes there are four stages. Maybe we’ll have four stages in every race next year. You never can tell.

OK, so some folks have embraced stage racing like a rabid porcupine. To be frank, NASCAR doesn’t give a damn what you think. How do you think it got to be the second-biggest sport in America behind only the NFL and closing fast? Oh, wait a second, they’re not. Now let’s discuss how the starting order for the race is determined now that qualifying has gone the way of tailfins, whitewalls and Blinky the Wonder Cat package shelf ornaments.

Somewhere in the midst of your NASCAR 101 lecture explaining how it all works to a new fan (and good luck finding one lately), no matter how erudite it might be, you’ll probably see your subjects eyes glaze over. They’ll likely ask if there’s going to be any big wrecks, how many laps the race lasts and which one of these cats is Jimmie Johnson. Then they’ll go to find the snack table and sneak off without saying goodbye. Likely to catch the 1 p.m. NFL games.

What’s the solution? I’m not sure; that’s several pay grades above mine. If NASCAR wants to go back ahead, give the title to the driver who wins the most races, with ties broken by who finished second the most, then third-place finishes, etc. I’m all for it. I can explain that system in less a minute.

2020 has been a trying year to date, and the hits just keep on coming. When I start feeling overwhelmed I try to remind myself, “This too will pass.”

I mean, there’s not a whole lot of passing going on out on the track lately anyway, is there?

Matt joined Frontstretch in 2007 after a decade of race-writing, paired with the first generation of racing internet sites like RaceComm and Racing One. Now semi-retired, he submits occasional special features while his retrospectives on drivers like Alan Kulwicki, Davey Allison, and other fallen NASCAR legends pop up every summer on Frontstretch. A motorcycle nut, look for the closest open road near you and you can catch him on the Harley during those bright, summer days in his beloved Pennsylvania.
Previous 5 Points to Ponder: Ross Chastain Plus Chip Ganassi Equals What in 2021?
Next Backmarker Blues: IndyCar Drivers Who Struggled At The Honda Indy 200