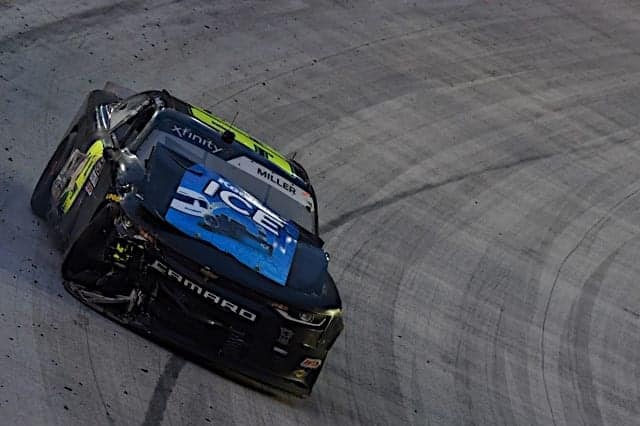 Both the NASCAR Cup and Xfinity series had cutoff races this past weekend at Bristol Motor Speedway. In recent years, Bristol has either provided very exciting or very dull races. It was literally all over the place Friday and Saturday night. You had drivers running away and hiding at times, while there was side-by-side racing to be had at other times.

Saturday night saw Cup’s Round of 16 conclude at Bristol. For Kevin Harvick, I think he’d want that round to just keep on going. It says something that he finished the round with a lead of nearly a full race on second.

Naturally, the focus for much of the race was on those at or below the playoff cutoff. Viewers got interviews with Cole Custer, Matt DiBenedetto and Ryan Blaney prior to the race. We also got an interview/feature with Clint Bowyer at his farm, where he goes to unwind. Of course, since we’re talking about Bowyer, he was his typical, loquacious self.

Thankfully, the race wasn’t just constant coverage of what Blaney, DiBenedetto, Custer, William Byron and Bowyer were doing, but they got a lot of coverage. Then NBCSN dropped the ball when those drivers ran into problems.

As you’re probably aware of by now, Byron busted his radiator after he ran into the back of Christopher Bell. Given the current damaged vehicle policy in NASCAR (which I continue to disagree with and will not change my tone about it), that meant that Byron was done for the night.

I have no idea what that looked like. There was no replay of what happened. Quotes from Byron indicated that Joey Gase all but stopped him in front of him, forcing both Bell and Byron to smash their brake pedals. Would have loved to see it.

In these situations, broadcasters need to be honest with their viewers. If their cameras failed to catch the actual issue, they need to tell the viewers about it. ESPN was actually not terrible at this, although that may have been something that Marty Reid (currently running for an at-large seat on the Hendricks County council in Indiana) took upon himself to do. If so, that was a good idea.

Later in the race, DiBenedetto was running in seventh and in position to get the Lucky Dog had a late caution flown. However, he apparently ran over some debris and was forced to pit. This is why he finished three laps down. There was no mention of this that I can recall on the broadcast. I just saw DiBenedetto coming out of the pits and I thought to myself, “what happened?”

There were some tire and wheel issues during the race in addition to DiBenedetto’s late problems. For the most part, NBCSN covered those well. Brad Keselowski had cording issues early in the race at which viewers were able to get a good look.  Martin Truex Jr. had a loose wheel that forced him to pit, something that he never recovered from. It was pretty definitively loose based on the oblong lugnut holes that viewers saw.

Speaking of Keselowski, he was able to contend until his power steering pump failed. This meant that he had to tool around the track until NASCAR black-flagged him for going too slow. The mess completely ruined his night. Since Austin Cindric had a similar issue the previous night (see below), the NBCSN booth was already prepared for this potentiality.

Post-race coverage was about what I expected, but it finished earlier since the race only had five cautions. Viewers got a half-dozen interviews and a check of the points. There was also some post-race analysis from Charlotte before the broadcast left Bristol. This occurred a full half hour ahead of schedule, though. NASCAR America Post-Race was scheduled to run up to 11:30 p.m. ET Saturday night. Instead, NBCSN signed off from Bristol at 11 p.m. and went to tape-delayed coverage of the Lucas Oil Pro Motocross Championship from Spring Creek in Minnesota.

Overall, I felt that there was too much cutoff coverage during the race. I don’t watch a 500-lap race at Bristol for the broadcast to talk about five different drivers. I want an inclusive broadcast that covers all the big storylines that are out there (and there are a lot of them). If something big happens, I do want to be able to see what happened. If we can’t see it, I want you to be honest about it.

In regards to the Byron issue, perhaps NBCSN just didn’t have a camera on it when it happened and was only able to catch aftermath footage. Perhaps one of NASCAR’s non-broadcast cameras picked up it, like that one incident between Busch and Blaney at Pocono earlier this year.

The on-track action that we did get to see was pretty satisfying. There were multiple grooves and drivers did have the choice of where to go. With the exception of Blaney late in runs, nobody really got right up against the outside wall in the turns, but you had a wide groove, which was at least partially responsible for the relatively clean race. There would have been more cars on the lead lap had the final caution not fallen where it did, though.

Friday night saw the Xfinity regular season come to an end at Bristol Motor Speedway. Unlike the Cup Series, there really wasn’t that much that was going to change. Yes, there was still more or less one spot still up for grabs, but Brandon Brown was far enough ahead of Jeremy Clements that it would have been impossible for Clements to advance without winning the race.

The fact that Cindric had already clinched the regular season championship in Richmond also lowered the amount of points discussion. That said, there was still a fair amount of points discussion since the actual positions (other than Cindric and possibly Ryan Sieg’s) were not in stone prior to the race. The possibility of Ross Chastain taking second in points away from Chase Briscoe was there until Cindric’s power steering broke in the closing laps.

Similar to Darlington, NBC had one of its booth commentators drive up to Bristol and serve as a roving reporter. It was Jeff Burton at Darlington Raceway. For Bristol, Steve Letarte made the trip up there, and it seems like he had a blast.

Bristol is a much smaller venue than Darlington. As a result, there aren’t as many unique features to point out about the place that isn’t already obvious. Instead of pointing out interesting things, Letarte served as a hybrid pit reporter/roving reporter. The closest I would describe to this was when FOX Sports had Jeff Hammond serve as a roving reporter a few years ago.

Letarte was effectively right at the exit of turn 4 when Jeffrey Earnhardt got into teammate BJ McLeod and created the biggest wreck of the weekend.

That was a big hit for McLeod into the wall, then possibly an even bigger hit from Vinnie Miller. He described it as an impact “…that shook the entire place.” It was every bit of a big crash. I feel like someone should have been at the infield care center when McLeod and Miller came out just to check on their conditions knowing how big the hits that they took.

The coverage throughout the race was focused on about six to eight cars. Too narrow for my taste. Yes, the scoring bar/scoring pylon kept you up to date on the running order, but you didn’t really see many others outside of them being lapped. It says something that half the field was a lap down before the competition caution came out on lap 41.

The race ultimately came down to power steering issues for Cindric. Viewers first heard about this issue on lap 285, when NBCSN played some audio from Cindric’s radio that indicated that his power steering had taken a vacation. The booth appeared to be surprised that he held onto the lead as long as he did. The fact that Keselowski ended up having power steering issues that put him behind the wall for a time (after getting black-flagged for failing to maintain minimum speed) Saturday indicates that Team Penske may have gotten a bad batch of parts.

Since Friday was the final race of the regular season, there was a little post-race coverage to talk to those drivers that advanced. Unlike the Cup and Gander RV & Outdoors Truck Series regular season finales, not everyone got on-air time.  Only five of the drivers were interviewed prior to the coverage ending. This is because the race ran a little long. Red flags due to oil downs will do that.

I’m still not a fan of such a narrow focus on race broadcasts. Especially right now, that is not a good look for NASCAR because nearly everyone is probably hurting for money. Without the ability to truly activate sponsorship at the track, exposure on television is far more important than it was before. NASCAR would do well to explain this to both NBC Sports and FOX Sports going forward since sponsor retention is going to be absolutely critical.

That’s all for this week. Next weekend, there will be a NASCAR tripleheader at Las Vegas Motor Speedway. In addition, Formula 1 will return to action in Sochi, while IMSA will be at Mid-Ohio Sports Car Course. While it will be a normal weekend for most of the series, Michelin Pilot Challenge teams will have a doubleheader since they will not be joining the IMSA WeatherTech SportsCar Championship teams in Charlotte next month to make up the canceled Northeast Grand Prix at Lime Rock. TV listings can be found in the TV tab above.

We will provide critiques of at least two of the three races from Las Vegas in next week’s edition of Couch Potato Tuesday here on Frontstretch. The Critic’s Annex will cover Thursday night’s UNOH 200 for the Truck Series from Bristol. I’ll also pepper in some thoughts on the Le Mans broadcast that aired live on Motor Trend.