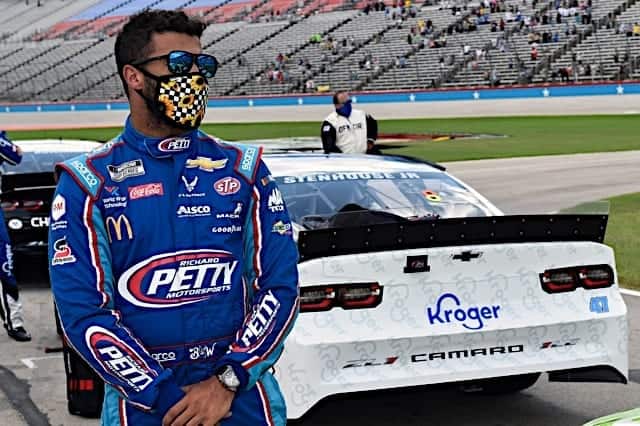 Bubba Wallace has found a home for 2021, thanks to Denny Hamlin. And Michael Jordan.

Wallace will drive for a newly formed Cup team owned by Hamlin and basketball legend Jordan in 2021, Hamlin announced Sept. 21.

The single-car Cup team does not currently have a number or make announced. Sponsorship has also not been announced, though it’s assumed that some funding will come from the multiple sponsors Wallace has announced in recent weeks.

Tonight, I’m excited to announce MJ and I are starting a new, single car @NASCAR Cup Series team for 2021. Deciding on a driver was easy – it had to be @BubbaWallace. pic.twitter.com/nIJv0X6ZOX

“Bubba has shown tremendous improvement since joining the Cup Series and we believe he’s ready to take his career to a higher level,” Hamlin said in a release. “He deserves the opportunity to compete for race wins and our team will make sure he has the resources to do just that.”

Added Jordan: “Historically, NASCAR has struggled with diversity and there have been few Black owners. The timing seemed perfect as NASCAR is evolving and embracing social change more and more.”

Michael Jordan quote on becoming a NASCAR team owner with Denny Hamlin and hiring Bubba Wallace as their driver: pic.twitter.com/XDufeB0KBn

“This is a unique, once-in-a-lifetime opportunity that I believe is a great fit for me at this point in my career,” Wallace tweeted. “I’m grateful and humbled that they believe in me and I’m super pumped to begin this adventure with them.”

The car will race with a charter purchased from Germain Racing, which will sell its No. 13 team at the end of the season.

The agreement for Wallace to drive is a multi-year deal, though the exact length was not specified at press time.

Wallace joins Jordan and Hamlin’s team after a three-season stint with Richard Petty Motorsports’ No. 43. Through 29 races in 2020, he’s 23rd in points with one top five and five top 10s.

I guess Jordan isn’t as smart off the court as on unless it is used as a tax write-off.

If Bubba can concentrate on driving and not “extra-curricular activities”, this could work. If Bubba brings in new fans, that can only be good for Nascar, as they’re losing fans at a record pace. I wish them luck… they’re gonna need it.

For Hamlin’s sake I hope MJ puts up all the dough. I put the over under at four seasons tops. NASCAR will funnel money to keep this afloat.

Best of both worlds business-wise. They can lean on the Gibbs technical alliance to get going and yet have the “new organization” excuse when the results aren’t there.

Question: Can a half white guy be the face of diversity ! !! I’m serious.

Ah Denny, always the name dropper and star flucker! Imo. Always promoting at every turn MJ is his guy. Funny, I never see MJ mention Denny, Other than an obligatory tweet from MJ. LOL. Should be interesting. A quick way to ruin a “friendship”, going into business. MJ has more money then God, and well Denny does not.

Time will tell. Too bad the product being promoted sucks. IMO. Oh, at first the hype will be huge, coverage over the top, what NASCAR press morons do best! We will be told our eyes lie and the person driving the car has always been the best thing ever! We were just to hateful and ignorant to see it! Wait for it! Stats don’t matter. We were told if this driver was in “better equipment” he would be the best ever, or close to it!

I look forward to that prophecy!

Things will settle in, and time will tell…for real. LOL.

Tony, the only way they will be able to lean on Gibbs is if they run Toyatas. So far that has not been confirmed.

What is up with this website? On top of the slowness now the Reply doesn’t seem to be working. It doesn’t put the reply under the comment to which the reply is being made.

So why isn’t Denny going to drive for his own team? Sounds like he has no faith and commitment to his own vision. In for a penny in for a pound Denny. Well at least he has a new distraction to help him choke in this year’s championship.

Danica ll is in the works. What hype this team will have for a year or two. We will just see how good a driver Bubba is and I have my doubts. He will have the best of the best and no excuses this time over money and talent. This team has the money for everything. But, you know the excuses will come. This is a new team, we need time to gel, we need to communicate better, we are still working on putting the right pieces in place, etc. That is why I say Danica ll. It will be almost a carbon copy and NASCAR and the media will do everything in their power to make Bubba one of the greatest ever just like Danica. Mark my words.

I hope MJ puts together a better organization than Hamlin and Wallace so far. If they fail it could leave another black eye on the sport.

The car will have to be a Toyota. Built and bought from Gibbs with TRD motors. Can’t imagine Toyota paying Hamlin to field Fords or Chevies.
More folks will show up to see Jordan then Wallace. That’s if Michael attends the races. I do think Jordan joining NASCAR is a plus for the sport. He is a popular fellow. However I wouldn’t count on black people showing up in droves. They have never supported oval track racing on any level over the years. Go to any oval track in the country and look at the grandstands.
Beginning to wonder when we will be seeing some gays and transgenders enter the diversity program.

Al Tourney is right. The only racing I see attracting a black fan base is drag racing. This is from personal experience at dozens of tracks in many states.
As for Bubba’s talent level he seems to be pretty mid-pack. Don’t know if he can improve or really has the drive to do so. We will see. won’t we….

If you want to watch a worthy Bubba here is last year’s Canadian Short Track Championship race that Bubba Pollard won and got a SEVENTY-FIVE THOUSAND DOLLARS payoff at the new refitted Cayuga Speedway (now Jukasa). He won the 250 lapper last year too and won FIFTY THOUSAND DOLLARS. Take a look…the new version of the speedway is spectacular.

This way Denny will get the best of both worlds. His salary and sponsorship money for driving the Gibbs car, plus his portion of the money from the new team.
If you’ve got the money and the connections to make it happen it could be sweet. Dont have to win, just bring in the money.

Car number should be 23! Unless BK Racing still holds some rights to it.

The only stat where Bubba has shown anything tremendous over the past three years is LLF (Lead lap Finishes): 16 versus 9, 6 and 2, respectively. He has 4 more Top-10’s, has led in 3 more races, and increased his average finish from 23rd to 20th. He currently ranks 23rd, up 5 from 28th in the last two years. I would hardly call these stats “tremendous”.

Let’s call it what it is, a gimmick to pay the bills. They are counting on the cash flow coming in to line their pockets at Bubba’s expense…, that’s all. Call it Danica 2.0. New race teams notoriously struggle for 3-5 years before gaining any traction, so Bubba’s not really “competing at a higher level”.

Up from last year. Really. Take a look at who is behind him in points. At least 8 of those have never won races in any of the top three tiers

I’m thrilled an owner of Michael Jordan’s means is entering the sport. Rick Hendrick, Joe Gibbs, Roger Penske, Richard Childress, and Jack Roush aren’t getting any younger. Give Bubba Wallace a team on par with Furniture Row Racing, which this will probably be, and Bubba will win. Bubba probably would have won a race this year if not for Joey Logano.

This team will attract more sponsors, too. This team could be very important in keeping the sport viable.

I hope Daniel Suarez to the 43 is next. He brings sponsorship and is better than Ty Dillon. (I wish Landon Cassill had the backing to drive the 43, but, alas…) Best I can probably hope for Landon is that Spire tabs him to help build their two-car team.

Hey Michael. Know how to make a million dollars in NASCAR? Start with two million.